Zulily, a private-sale shopping site targeted at busy moms and their kids, has filed its S-1, aiming to raise as much as $100 million in an IPO (this is a placeholder amount and could change).

In its last funding round a year ago, the company was valued at $1 billion. Zulily was co-founded by Darrell Cavens, the former senior vice president of marketing and technology at Blue Nile, and Mark Vadon, the chairman and founder of Blue Nile in 2009. Zulily raised $139 million from Maveron, August Capital, Andreessen Horowitz, Trinity Ventures and Meritech Capital Partners.

Similar to other flash-sales sites, Zulily features dozens of new sales events daily that offer up to 70 percent off. Sales last an average of 72 hours and products range from clothing and toys to household goods and books, aiming squarely at moms. To date, Zulily says that it has worked with over 10,000 brands, featured over 1.6 million product styles and sold over 42 million items to over 2.9 million customers across the platform.

Zulily is a breakout from the flash-sales model, which hasn’t been able to churn out as many billion-dollar businesses as once hoped. While there has been a softening of the markets toward consumer-based tech businesses, it will be interesting to see how an e-commerce company is received by investors. It’s debut should also be a predictor for the other giant in the flash sales space, Gilt, which could also be considering a public offering as well. 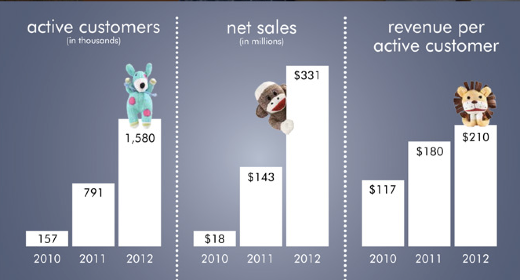