For a long time, the web-based social bookmarking service Delicious was a poster child for the Web 2.0 movement. It was open, collaborative and full of the tags and user-generated content that made VCs instinctively open up their checkbooks at the time.

It’s been 10 years, since the service opened to the public – then still running on the del.icio.us domain – and while it’s changed owners a few times since, it’s still up and running and its original concept hasn’t changed all that much. But the site did give itself a fresh new design for its 10th birthday, so it’s worth taking another look. 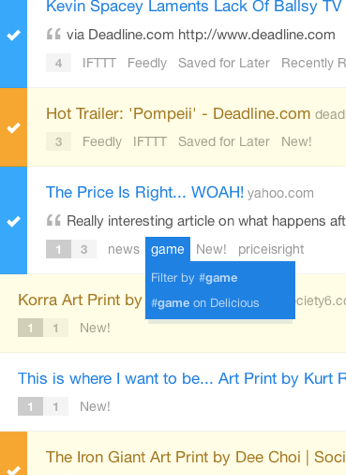 Yahoo famously acquired Delicious back in 2005, two years after it was founded, and then let it linger for years. That’s what Yahoo did with way too many of these popular Web 2.0 services (Flickr being the other key example) and by 2010, it looked like Delicious’ days were over.

Delicious had long stopped being a hip product, users weren’t all that interested in taxonomies, folksonomies and all those other buzzwords anymore, and it felt like its shot at mainstream appeal and new growth was long behind it. If Delicious had shut down at the time, its frequent users would have been furious, but among mainstream users, its closure would have mostly gone unnoticed.

Yahoo, however, didn’t close Delicious. Instead, it sold it to AVOS in April 2011, a company YouTube founders Chad Hurley and Steve Chen founded for what, at the time, seemed like the express purpose of buying Delicious (it since launched video service MixBit and the Chinese Vine clone Wanpai). Ever since, AVOS has quietly continued to work on improving Delicious, though it doesn’t look like its traffic is picking up or user interest in the form of social bookmarking is making a comeback. Joshua Schachter himself, Delicious creator, left Yahoo in 2008 and as far as we know, none of the early developers are still working on the project today.

I’m not sure its latest redesign is going to make a big difference, either. The user interface is now significantly less cluttered and responsive, and it features some new Twitter-powered personalization options for content discovery. And the new bookmarks editor that you can bring up with a double-click is something its users would have happily paid for eight years ago, too.

Still, it looks like AVOS continues to back the service, which doesn’t seem to have any discernible business model at this time. Based on the redesign announcement, which went almost completely unnoticed, the team is working on an Android app and new browser extensions.

Since link sharing has almost completely moved to Twitter and Facebook, however, it’s hard to see how Delicious could stage a comeback without completely altering its course. In the Mixbit video the team made for the relaunch, the team says that “it’s only just getting started.” Two years after the acquisition, it’s hard to believe this statement, but it’s still nice to see that AVOS continues to support Delicious.