At its heart, Twitter is a firehose. Everything you tweet shows up to every one of your followers. It’s what makes Twitter feel like the real-time pulse of the world. But it could also be preventing Twitter from growing. Follow too many people, and you lose track of those you love and stop following anyone new.

Imagine you’ve just joined Twitter. You follow some popular accounts of big publishers and celebrities you’re interested in, as well as some friends and acquaintances. The unfiltered feed works. You get up-to-the-minute news and stay aware of what people you know are up to. There aren’t so many tweets in your stream yet that you miss the ones from the people you care about most.

But then you follow a few more people, and then a few more. You find more distant acquaintances and colleagues on Twitter so you follow them. You subscribe to experts in the niche areas you geek out about. Friends retweet something funny and you follow the author. Or somebody random @ replies and follows you so you do the polite thing and follow back.

Gradually, your feed gets noisier and noisier. A few of the accounts you’ve followed post dozens of times a day and drown out everyone else (TechCrunch’s account is renowned for this). Twitter’s a stream, not a queue where you have to read every tweet, but you still. You find yourself missing great jokes, links, and insights from your closest friends who only tweet occasionally. When you visit Twitter, you see fewer interesting things in your feed than you used to.

And that’s where the problems for Twitter’s business start.

You put up with the mess but don’t enjoy your experience as much. If you’re a power user, you might create a Twitter List of your favorite people, but it takes a lot of effort. For everyone else who wants to trim the fat from follow lists, it’s tough to know where to start.

Twitter keeps on recommending more people to follow, both organically, and in exchange for ad dollars, but doesn’t tell you who you never interact with and should unfollow. It takes multiple clicks to unfollow someone, making it a laborious chore to ditch 10 accounts, and you still have hundreds left. You might have noticed that the “Follow Friday” trend where you’d recommend people other should follow has died off. No one has the bandwidth.

Your firehose is full, and it leads to two behaviors that are devastating to Twitter: You visit less and you stop following new people.

The first means you encounter fewer of Twitter’s ads. It only gets paid when people click its ads, and you can’t click if you don’t visit. You’re also not around to @ reply, favorite, and retweet other people. That means they see fewer notifications and return to the site less frequently, so they see fewer ads, too. Another active user disappears, and Twitter’s MAU stagnates.

The second means that the friends, acquaintances, publishers you would have followed end up with a smaller audience. No one wants to feel like they’re talking to a brick wall or shouting into a black hole. After a few days, weeks, or months of tweeting with no one listening, these people give up.

Twitter is littered with the corpses of accounts that passed away too young or never truly lived.

Some reports, like one from Mike Isaac, peg Twitter at having more than 1 billion registered users, yet today, Twitter confirms that only 218 million are active. That’s a painful attrition rate that is hindering Twitter’s ability to grow large enough to become profitable.

Worse yet, people who quit Twitter or just hardly visit likely return to Facebook. It’s literally friendlier. People have a built-in audience of real-life chums who Like and comment on their posts. They don’t have to be ‘thought leaders’ battling to be heard. They accumulate friends just by living, and it’s not a contest to have the most connections. 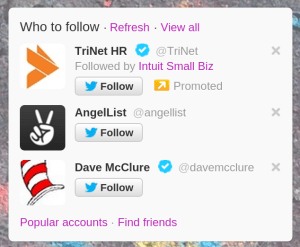 Even if it were, Facebook’s filtered feed is built to adapt to however many friends you make or Pages you Like. Rather than show an unfiltered feed of everything posted by everyone in your social and interest graph, it just shows you the best posts — the ones with the most Likes and comments from the people you interact with most.

That doesn’t make it as good as Twitter at being a source of breaking real-time news, but Facebook does its best to make sure your feed is always interesting. It doesn’t always succeed, but the filtering happens automatically. And Facebook gives you direct control, allowing you to select how frequently you want certain people to appear in your feed or even what kind of stories (photos, games) you want to see. These controls are little-known and buried behind far too many clicks to be used efficiently, so it has room to improve.

Twitter’s not the only one with unfiltered feed problems. Instagram may eventually have to grapple with it. But for now it’s younger, has fewer users, and its casual feed of photos is less vulnerable to noise since it’s just pretty pictures.

Getting people to manage their own streams is an extraordinarily tough design problem. But Twitter’s role as the most popular unfiltered feed on the web means it needs to pioneer ways to make the format sustainable as it grows.

Twitter should not abandon its unfiltered feed. It’s the foundation of its whole user experience. Still, there are other ways to alleviate the overflowing firehose problem.

Twitter may want to forge as many connections in its “interest graph” as possible. Each follow tells it more about what kinds of ads to target to people. But the company should look to make it easier to unfollow people who clutter your feed.

First, making it quicker to unfollow someone by adding a button to expanded tweets would help. More forcefully, Twitter could analyze which people you never @ reply, retweet, favorite, expand the tweets of, or visit the profile of. Then it could suggest that you unfollow them either in the sidebar or with an immediately accessible button on their tweets in the stream.

Twitter could also provide a feed-cleaning tool. It could rank who you follow by your engagement with them, and make it easy to bulk unfollow people you don’t care about but who tweet a lot, or add to a List the people you interact with most. These tools will need to work from mobile, considering 75 percent of Twitter users access the service from their small screens.

If Twitter doesn’t address these issues, veteran users may tune out and new recruits might never see the magic of its global forum. There’s nothing like tweeting something and getting responses within seconds. It makes the whole world feel smaller. The challenge is whether Twitter can retain its intimate town square atmosphere for everyone as it grows to become a digital city…and a public company.