It’s a tale of two very different fortunes in the mobile-making market. HTC has today announced preliminary results for its Q3, recording a net loss of NT$2.97 billion (around $101 million) on total revenues of NT$47.52 billion ($1.6 billion) — the veteran mobile maker HTC’s first ever quarterly loss. Compare that to Samsung, also just announcing earnings guidance for its Q3, and it’s the opposite story: Samsung is expecting record profits in its fiscal quarter.

Bloomberg reports that Samsung’s operating profit in the quarter beat analyst estimates, rising to circa 10.1 trillion won ($9.4 billion) fuelled by sales of cheaper handsets in emerging markets. While total revenue for Samsung’s Q3 is an estimated 59 trillion won ($53.9 billion).

Back in July, HTC issued guidance for its Q3 quarter, warning investors to expect a net loss so that it’s making a loss is not a surprise. However it had said it expected its Q3 revenue to be in the range of NT$50 billion ($1.7 billion) to NT$60 billion ($2 billion) — so today’s preliminary revenues of NT$47.52 billion ($1.6 billion) come in under that earlier guidance, suggesting things are even worse than it expected.

HTC is not at this point putting any meat on the bones of those preliminary numbers to explain that shortfall. But it’s likely to release audited results at the end of this month — and may share more detail then.

A tale of two mobile makers

In some senses the comparison between Samsung and HTC’s relative fortunes is unfair, being as Samsung’s success is not purely down to making phones —  the Samsung Group makes all sorts of gizmos, small and large, under various business subsidiaries: from TVs to fridges to tanks (yes, tanks — aka armored personnel carriers).

But, regardless of that sprawling empire, mobile making is Samsung’s biggest business unit, although its chipmaking division (which also piggybacks on mobile’s momentum) is doing well too.

Samsung’s success in mobile can certainly partly be attributed to its huge size and resources, but also to a strategy of making a LOT of devices, at multiple price-points and form factors, to saturate the market with Samsung-branded plastic. And backing that up with a massive marketing budget. 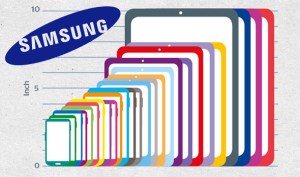 That contrasts starkly with an HTC fallen on hard times, with a reduced portfolio and far more modest marketing means than Samsung’s (even if HTC is spending millions on hiring Robert Downey Jr. to rework its brand image).

With sliding profits and declining revenue for now eight straight quarters, HTC has been forced to prune back its portfolio, exiting the tablet category entirely for instance, to concentrate shrinking resources on a handful of devices, such as the HTC One (and a One Mini variant).

Meanwhile Samsung steamrollers the market with multiple versions of almost every device it makes, buoyed up by record profits. Iterate and conquer is Samsung’s mobile mantra.

How much time does HTC have?

While HTC’s Q3 loss is nowhere near the $972 million Z10-shaped hole in BlackBerry’s fiscal Q2 books, its first quarterly loss is nonetheless a stark marker in such a competitive space, as industry analyst Asymco’s Horace Dediu notes in a post on HTC’s situation.

“The observation I have been making is that once a company begins to generate negative operating margins from phone sales, that phone business never recovers,” he writes. “The question then becomes one of gauging how long they have before the business is sold, dissolved or merged.”

2013 is already shaping up to be a bloodbath year for mobile makers, with BlackBerry looking to go private — which at least opens up the possibility of the company being broken up and sold off for its constituent parts — and Nokia announcing its intention to exit the mobile-making business by selling its devices & services unit to Microsoft. It’s rapidly looking like HTC’s Peter Chou has the new most stressful job in mobile as the grandest old mobile daddies topple around him. 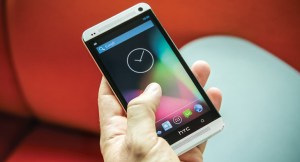 Dediu’s thesis is that there is a two- to three-year window after a phone making business starts making a loss before it is forced to make some kind of exit. Which means the clock is now ticking for HTC.

“HTC has just confirmed that they have lost profitability for the first time since going public in 2002. As the clock begins running the alarm is now set to a much tighter 2 years. The implication being that HTC will change ownership or control no later than mid 2015,” he adds.

As its business starts to burn money, HTC is running out of runway to try new things. Its experiment with the Facebook Home phone which, thanks to Home flopping, never really got off the ground can’t have left it feeling good about off-piste options to make its products stand out, either.

But that’s not to say it doesn’t need to try. Quite the opposite; now may well be a time for HTC to consider nuclear options.

One such option surfaced in rumour form today, with Bloomberg reporting that Microsoft — also struggling to make its mobile efforts translate into marketshare — has reached out to HTC to see if the company would be interested in adding Windows Phone as a second OS to its Android handsets.

Standing out in an Android space so dominated by Samsung has proven to be a tough call for many device makers. HTC’s strategy has been to skin Android with its own Sense UI software, and focus on hardware design and components like the camera (with its Ultrapixel play). But while the HTC One has been very well reviewed, it’s still only one phone fighting many other Android phones. It’s the strategy that’s failing, not HTC’s phone design.

Partnering with Microsoft may be one way to unlock additional marketing resources to help HTC raise the profile of its devices. Microsoft has not been shy about doling out cash on co-marketing efforts around Windows Phone. And, according to the Bloomberg report, Redmond is also apparently considering nixing its WP license fee to make a dual-boot WinDroid more attractive to HTC. 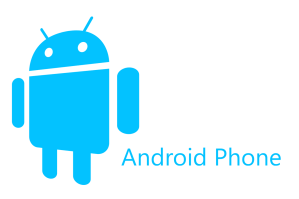 But the problem is that despite Microsoft’s best efforts Windows Phone’s marketshare remains minimal. Looked at from that perspective, does a struggling HTC really need to tie its fortunes to a struggling mobile OS?

But would a dual-OS smartphone set the market on fire? And have people falling over themselves to buy HTC’s phones? Probably not. It seems unlikely that a more complex smartphone experience is what the majority craves.

That said, a WinDroid would stand out from the Android crowd — on merit of difference and Microsoft marketing cash. It would also give Windows Phone the benefit of (quasi-)access to Android’s massive app ecosystem. (Ok, you’d be switching back to Android to run those apps but if lack of apps is preventing WP adoption consider that a ‘workaround’).

So there are perhaps worse nuclear options HTC could consider. Ultimately, the market’s reaction to an HTC-branded WinDroid would depend on what kind of software extras are bundled in and flagged up to sell the concept. So really, it comes back to marketing again.

That said, difference is all too often met with indifference in the mobile market. The problem that Microsoft’s and Facebook’s mobile efforts have faced (and continue to face) is that most people aren’t unhappy with their devices. People don’t have a problem with a ‘grid of apps’. Actually users really love apps.

Bottom line: Samsung and Apple have a lot of very satisfied customers, with zero inclination to switch. It’s that indifference that try-hards like Nokia, BlackBerry, HTC, Microsoft are finding all but impossible to crack.