The double rise of cloud-based services and consumerization have been two of the biggest developments in enterprise IT, but they have also led to one of the biggest conundrums: IT managers and CIOs happy to see employees switched on and working are also facing big headaches around managing and monitoring potentially thousands of apps that their people are now using.

Today, a new startup called Netskope is launching out of stealth to try to meet that challenge head on, with a new platform that lets companies monitor all of the cloud-based apps that employees use, and then set security policies to protect against data breaches and more. “Our solution allows you to go rogue, but in a safe and compliant way,” CEO Sanjay Beri tells me.

Netskope is not your ordinary startup. Out of the gates, it’s launching with $21.4 million in funding from Social+Capital Partnership and Lightspeed Venture Partners. And that’s not all. It also has what Beri described to me as a “dream team” of engineers and others from some of the most impressive enterprise IT startups that Silicon Valley has produced — Palo Alto Networks, McAfee, and PayPal among them — some 55 employees in all, many of them 15-20 year veterans of the industry.

“We’re the anti-startup,” Beri says. “These are people who were fed up with complacency and entrenched attitudes at their past employers.” A fitting start for a company that is also trying to tackle a similar challenge at the enterprise level.

That $21 million has come in two tranches, both raised while Netskope was still in stealth mode. The first was a $5.5 million seed round from Social + Capital; the second, a $15.9 million round closed earlier this year from Lightspeed.

That’s not the only ammunition that the company has: while still under the radar, it was running a private beta with a number of companies, with sizes ranging from 5,000 to 25,000 employees. This has produced several paying customers. Two that are being named today are Vegas.com and Universal Music Group, although Beri notes that there are more in the Fortune 500 category, some of which will be revealed in the coming weeks.

The idea behind Netskope is that it assumes that both consumerization — the idea that employees will keep bringing their own ideas to the table in terms of what devices and services they use at work, and many of these will be riffs on what they use at home — and cloud services are inevitable trends. That leads to a messy landscape of services getting used, often to share sensitive information. “If you’re a CIO or CSO, frankly you don’t even know what’s going on the cloud. You are blindfolded,” Beri says. “But what do you do? Tell them to stop using these applications? You are going to be the villain if you do that. These apps are brought in for a reason: for productivity.”

And so, rather than trying to tailor IT policy to try to mimic these, Netskope’s premise is that the best thing to do is to go along with whatever the employees want to do — to “eliminate the Catch-22,” in Beri’s words. Netskope’s platform is currently is able to support some 3,000 different applications in its service — from the most popular to those less-well-known. What it does, Beri tells me, is that after it is turned on by the IT department, it scans the network and devices on it to detect different apps. It starts monitoring from there, in real time. IT managers can in turn use the Netskope dashboard to track how information moves, and to set policies to limit usage, warn users of bad practices and so on.

“We are look at any transactions that are happen between users and applications,” Beri says. “For any activity where data traverses between you and a server, Netskope can perform data analysis on that.”

Netskope currently works across what it has organized as 50 different categories of apps — around areas like workforce collaboration, CRM, accounting, sales and so on. That fact that there is so much fragmentation among them — even within services from single vendors like Microsoft, or Oracle or Salesforce — is almost a blessing for Netskope.

Like other SaaS offerings, Netskope’s platform is sold at a yearly subscription. With many other SaaS apps turning to monthly and even pay-as-you-go services, it will be interesting to see if these tiers also get added to Netskope’s plans, especially as it grows out and perhaps extends more into the small-business segment.

For all the impact that companies like Amazon Web Services has had on the growth of cloud-based services, Beri says Netskope is “absolutely not” relying on it or other third-party providers as its own infrastructure provider. “We are very focused on security,” he says. The company, instead has gone into partnership with the carrier-neutral data center provider Equinix, with whom it’s chosen to build its own high performance, high security cloud. “Large enterprises really need to invest in certified infrastructure,” he says. (That’s only part of where this investment is going, though: the rest is to sales and general employee retention, no small thing when you have such a senior staff.)

That “anti-startup” positioning has also helped on another front: that of intellectual property. Beri says Netskope has already filed some 36 patents, a benefit of having as its founding employees “some of the principle architects of some of the major enterprise companies out there today.”

To kick off its launch, Netskope’s also produced a report on some of the stats that it has amassed about enterprise app usage so far — a testament to some of the big data credentials of the startup, and perhaps even a sign of how it might be able to leverage that kind of data in the future. Here’s the what the company found to be the top ten most popular enterprise cloud apps. Not too many surprises among them. 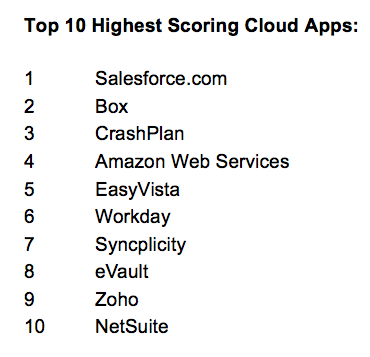