Personal assistant app Cue has been acquired, we’ve confirmed with a person who should know. The app has sold for between $40 million to $60 million, we’re hearing from two sources, including TechCrunch tips, who posit that Apple has picked up the company for over a $35 million price tag.

While we’re hearing that the price range was more like $50 million to $60 million, Apple Insider earlier published an anonymous tip that Apple bought the company for at least $35 million. According to our sources, Dropbox had at some point been in the acquisition queue for Cue. ;)

Backed by SV Angel, Sequoia Capital, Lerer Ventures and Index Ventures in addition to some notable angels, Cue was born as Greplin, a social search startup. The company will not be shut down post-acquisition, though it did recently shut down its app.

Greplin turned into Cue last year and relied heavily on user e-mails to create a personal agenda. Cue had previously raised a $10 million round in November of 2012 from Index Ventures, which the startup chose not to announce.

Personal assistants are all the rage, with everything from Apple’s Siri to Google’s Google Now hogging headlines. There is also another tier of independent companies showing similar intent with products like Nuance’s Project Wintermute, Incredible Labs’ Donna and the Sunrise calendar. Apple will probably debut the product in iOS 7,  with Cue’s email and social network magic used to more accurately represent what you’ve got going on and coming up in the “Today” section of the Notification Center.

Apple has gotten back to our own Ingrid Lunden with a statement, which is apparently “as close to an Apple confirmation as you’re going to get” from the established company:

Hi Ingrid, thank you for your interest in Apple. Here is our statement on this: Apple buys smaller technology companies from time to time, and we generally do not discuss our purpose or plans. 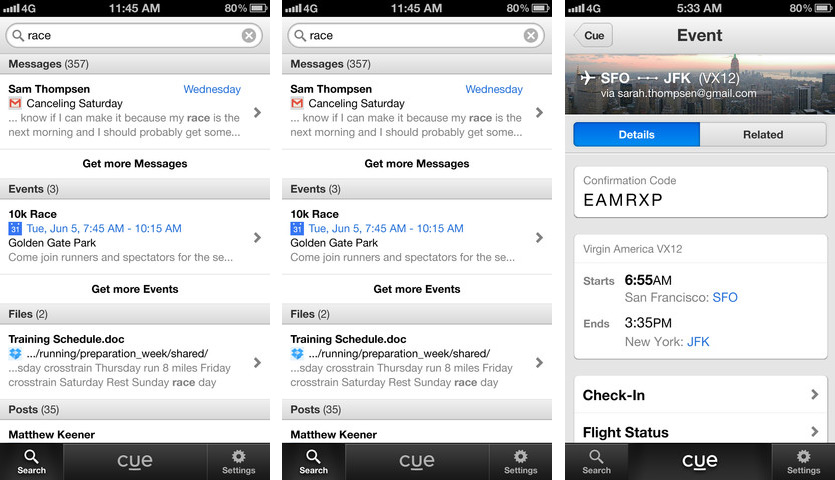