When digital recruiting platform HireVue got its start nine years ago, the company actually shipped webcams to job candidates, allowing them to interview for long-distance jobs online. Though today, video interviewing startups are far more common, this was still something of a novel idea at the time. Founder and CEO Mark Newman recalls those early days running his company as 20-year old just out of college, telling people they were going to take a job interview with a webcam. “People’s responses were, ‘what’s a webcam?’,” he says.

How times have changed.

Today, the company is announcing a $25 million Sequoia-led Series D round of funding to continue to fund its growth, the majority of which has come about over the past three years. Sequoia Capital’s Mickey Arabelovic is joining the company’s board as a result of this new round, which also saw participation from Kickstart Fund and the company’s previous investors (Granite Ventures, Investor Growth Capital, Peterson Ventures, Rose Park Advisors).

Salt Lake City-based HireVue now has a team of 140 employees, and services global brands like Vodafone, Xerox, JP Morgan, General Motors, Dow Jones, Walmart, Geico, United Health Group, Hilton, Panda Restaurant Group, Chipotle, ConocoPhillips, Ocean Spray, CDW, Red Bull, and dozens of others. In total, the company has over 300 enterprise customers, including six of the Fortune 10 and 20 of the Fortune 100. These clients spend anywhere from $10,000 to over a million per year with HireVue, depending on their needs. 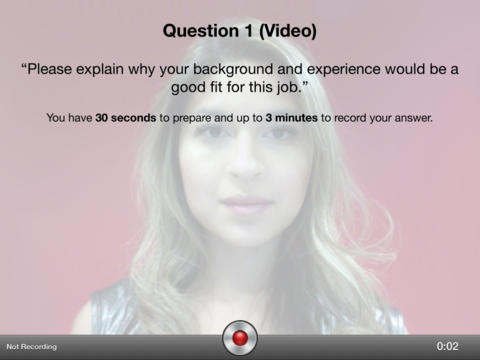 And while HireVue will still ship you a webcam if you need one, the company’s software is now used on desktops, laptops, iPads, other tablets and smartphones.

Its web-based platform offers different video interview types for different use cases, including both live and on-demand interviews. With asynchronous interviews, candidates can respond with video, written text, or programming challenges. The company acquired CodeEval last year to help with that latter option, and Newman says he’s thinking about ways to partner with other online learning platforms like Degreed and CodeAcademy in the future, as it sees an increasing number of technical hires coming through the platform.

HireVue also heavily invests in analytics and reporting, as well engineering and development in order to ward off competition from a growing number of players in the space.

On the product side, the company is moving into other areas, including learning assessments, which will help HR departments better understand how well training programs work, as well as tools for onboarding and team discovery. With these initiatives, now in beta testing, Newman explains how he wants to bring more of the human element back to HR. With the team discovery piece, for example, new hires can record a series of answers to questions of the “getting to know you” nature. This offering is being launched independently, as well as integrated into Salesforce.com. 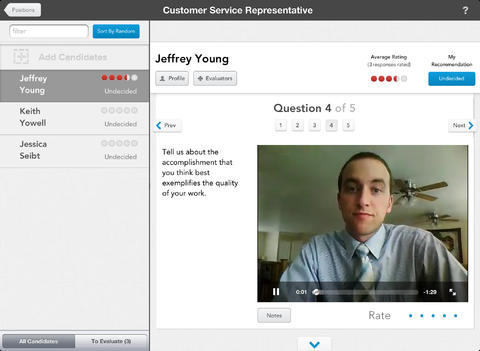 These moves and others highlight HireVue’s ongoing expansion beyond just being a part of initial hiring process, as the company finds other avenues within HR it can explore. “If you think about HR software, it’s: did I get paid, do I have to update my status if I got married or had children, or do I need to change my address, if I moved?,” laments Newman. “We think that the idea of people, and the ‘human’ in human resources, has disappeared because the folks have had to be on reporting and compliance,” he says.

Newman confirms that HireVue is moving deeper into HR with other new offerings as well, but isn’t ready to announce the details of what those may be. However, we do know that while HireVue isn’t thinking about taking on social, collaborative platforms like Yammer or Salesforce’s Chatter directly (it would rather partner there), it does see a place for itself in larger, event-based interactions involving collaboration. HireVue could come into play for things like employee reviews, he says.

Also in the works are international expansions, first to London and then later to an emerging market like India or the Philippines. Newman tells us a quarter of HireVue’s market volume these days involves emerging market hiring.

HireVue is now on track for over $10 million in revenue, and it’s been doubling year-over-year since 2009. “All the growth over the nine years happened in the last three. I guess it just took a bit of patience,” says Newman.