Clinkle, a much-hyped mobile payments startup which raised $25 million in funding ahead of having a publicly available product, has been notoriously secretive about its user interface and the details of how it all works. TechCrunch has been able to grab some screenshots in the past that demonstrate how the app functions, and spoke with beta testers and former employees to get a sense of its differentiating elements. But nothing comes close to this tell-all video which appeared a few days ago giving away much of Clinkle’s secrets.

The video’s creator is currently unknown, but it appears to be someone with direct knowledge of Clinkle’s plans. A lot of people who worked for Clinkle for a short time were strung along with promises of equity and then dropped, we’ve heard. That’s why it makes sense that there’s some potential for a leak of this nature to occur. However, the tipster who sent in the video claims they were able to bypass the Clinkle waitlist in the app, which is how they were able to see all this functionality.

For starters, the video shows off the Clinkle user interface in action. These images include a lot of shots where photos of America’s founding fathers are used in the place of “dummy” user accounts. This correlates with the placeholder images we had previously pulled out of the app’s APK, again lending credence to the video being either a direct capture, or at least a very knowledgable recreation. 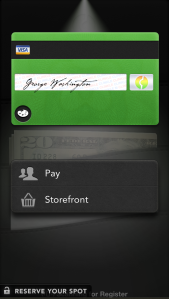 The video demonstrates how Clinkle can manage cash, credit and debit cards, transfers and withdrawals, as well as other things, like peer-to-peer payments (similar to Venmo, now owned by eBay/PayPal), and transaction histories. There’s a “rewards” button shown at one point in the video, and it also looks like you can buy different wallet skins like “Kerouac” and “Duct.” (It’s the Instagram of mobile wallets!)

Toward the end of the video, it also shows a screen that says “Aeorlink enabled,” which refers to an ultrasound connection between a phone and an iPad acting as a register – basically the app sends encrypted sound waves that act as the payments. A Register app had earlier appeared in the iOS App Store before being pulled.

From the details on an accompanying tell-all Tumblr blog, a tipster explains that with Aerolink, the ultrasonic sounds encode a store, register, and transaction identifier but the process may be open to security vulnerabilities. It also may be technology sourced from a third-party, the post states. (The video and Tumblr blog were sent in by the same tipster, but we can’t be sure at this point that his or her claims to be the author of both are legitimate. This same tipster has apparently also been in contact with ValleyWag.)

TechCrunch verified with a source familiar with the app that the images and video look exactly like the most recent version of the Clinkle user interface that they saw, and noted that the interface hasn’t changed for some time. 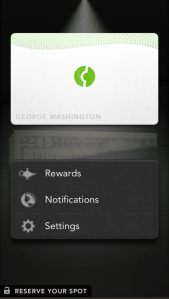 This Tumblr blog reveals that Clinkle’s accounts are actually being held by Zions Bank, which is why the app asks for things like your driver’s license photo and Social Security number. That allows Clinkle to transfer money to your real bank account with the app’s “ATM” functionality. Using a real bank behind the scenes is not altogether different from how other startups, like Simple and Dwolla, operate. It’s very difficult for a startup to actually be a bank itself, so it instead innovates on the front-end. But even though Clinkle is not a bank, it will need to take fraud and security very seriously, especially if it’s asking for such personal information from its users.

The phone number 1855CLI-NKLE, also featured in the Tumblr blog, when called, did respond “hello this is Clinkle,” when tested a few days ago. It appears to be an office number.

To be clear, most of the leaks confirm functionality we already knew about, but now it’s a case of being able to see how it works, rather than just hearing about the details from sources.

The potential for more leaks around Clinkle continues, as the company is not planning to have some grand launch event, but is rather quietly expanding its tester base while launching around college campuses.

If you haven’t yet heard of Clinkle and aren’t sure of what the fuss is, the most interesting thing about the startup, frankly, is how it’s managed to score $25 million in funding at this point in its development cycle. The mobile payments space is not easy – it’s a fragmented market where there are multiple experiments and no clear winners. To even compete, Clinkle has to take on giants like Google and PayPal, credit card companies, banks, and other startups like Square, Square clones, and Dwolla. And to be successful it will have to prove itself more useful than paying with cash or swiping a card – something which other technologies have yet to do.

We’re reaching out to Clinkle for comment on the leaks now and will update with their response, if provided. For what it’s worth, these “leaks” themselves could be staged – that is, maybe the company wants people to talk, as anything kept under wraps makes reporters want to dig for more. On that note, a recent call with TechCrunch reporter Billy Gallagher, founder Lucas Duplan spoke to Clinkle’s need for a network effect, saying, “we need to get people excited about this, because good technology alone isn’t going to be enough.”

UPDATE: Clinkle has responded, saying that “as a general policy, we don’t comment on product speculation. However, I will say that the video that was posted is a) inaccurate and b) to the best of our knowledge, produced by a Venmo employee.”

UPDATE 2: Venmo has responded to this accusation, saying, “the company did not have any involvement in the video.”

We should also point out that in a previous post, TechCrunch had described some of the functionality in Clinkle in more detail, based on conversations with beta testers and former employees. Clinkle claimed the information we had was misleading and incomplete after publication.

Concerned about accuracy, TechCrunch removed a few details from the original post, and disclosed that change by saying at the time: “Note: I removed two paragraphs from this post regarding Clinkle’s technology. While the information my sources gave me is accurate, it is far from a complete picture and, absent more detail, could be misleading to readers.”

This post was cited by NY Mag, which then related some of things we had mentioned – like how the app uses the microphone and speakers to emit a certain frequency. The YouTube video and Tumblr post now seem to confirm these things as well.