There’s been plenty of buzz about iBeacons and Bluetooth Low Energy radios — they’re supposed to do wonders for in-venue positioning, and plenty of companies have already expressed interest in deploying them in the field. But what is it like to actually stroll through a beacon-laden area? Curiously enough, Major League Baseball took on that challenge and recently decided to show off its vision of a Bluetooth-enabled ballpark at Citi Field in Queens, NY.

“What we’re moving toward is building a platform for any team to put their own custom Bluetooth beacons in their parks,” said MLB Mobile Product Dev SVP Chad Evans as he clutched his iPhone outside the venue.

Let’s be clear about something first: Very little about MLB’s big Bluetooth push is final at this point. It almost seemed that, with this experiment, MLB’s tech team was thinking out loud. A handsomely revamped version of the MLB At Bat app is perhaps the furthest along. Evans says the design language of the app, which now features a seemingly Googlean stream of cards that display your ticket barcode and seat locations (among other things) is near final and will roll out to consumers in the coming months. The visual polish of the software was balanced by the unfinished nature of the hardware that made all those whiz-bang features possible. At this stage it’s all prototype gear, small boards lashed together and housed in milky-white plastic cases to protect them from the elements.

With all that said, MLB’s little experiment shows plenty of promise. Walking across the threshold into the park proper prompted a notification on Evans’ demo iPhone welcoming us to the venue. Stopping in front of the old Shea Stadium Home Run Apple and holding that same phone to a demo stanchion kicked off a video that described the Mets’ home for 44 years. Once we passed into the park’s rotunda and paused in front of the escalator, the app recognized us as a first-time visitor and offered us $2 off a Nathan’s hot dog. Eventually, Evans said, the app and those Bluetooth beacons will be able to direct users to the closest route to their seats. 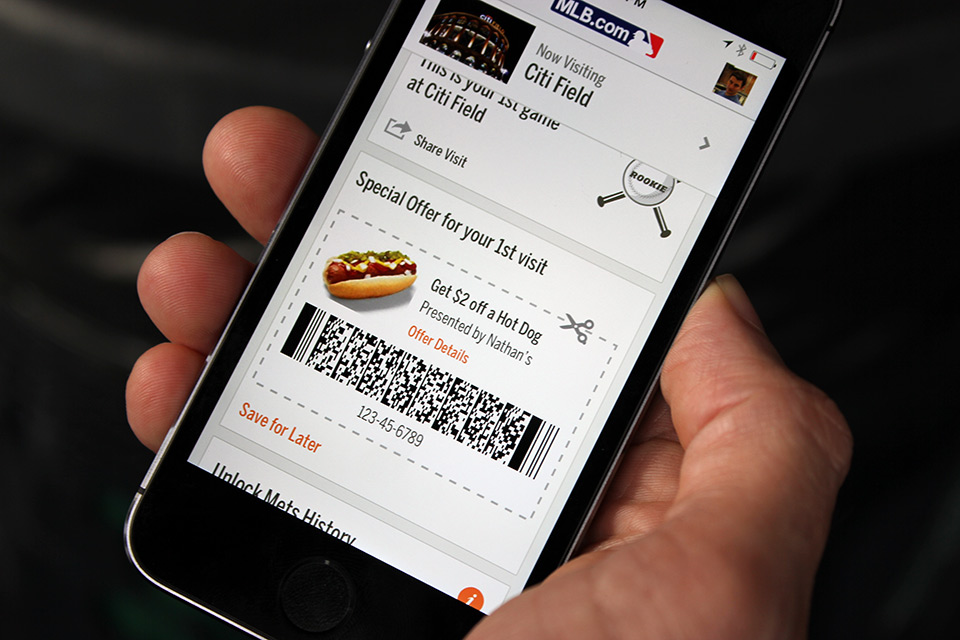 One has to wonder how much further MLB could take this concept. If you could track app users as they bounded from location to location in a ballpark, you could probably develop a pretty granular profile to help target for ads or other engagement opportunities. Repeat visitor to the Mets Team Store? You could get pushed a loyalty discount. Were you spotted making more than a few trips to the bathroom? Maybe you shouldn’t be pushed any more drink specials. Granted, the second example is pretty extreme, but Evans didn’t completely rule out the possibility of more fine-grained location sniffing… if the organization can figure out how to accomplish that sort of thing without creeping out the fans.

How far could MLB take the concept?

Once you start seeing what MLB (and plenty of other organizations like it) can do with iBeacons, it makes sense why Bluetooth Low Energy is suddenly so in vogue. The level of targeting and reach that a smartly assembled array of Bluetooth beacons provides could profoundly change how companies try to interact with us for better or worse. It certainly doesn’t hurt that support for Bluetooth LE is something both Apple and Google have committed to either — iDevices as old as the 4S can take advantage of these features if they’re running iOS 7, and Google confirmed that Bluetooth LE support would be one of the main additions to Android 4.3. That means a huge swath of the devices out there and in the pipeline will be ready to, well, play ball with this newfangled approach to interaction.

Evans admitted that MLB has explored a few other location-based content delivery systems in the past, but solutions like NFC’s stop-and-tap-and-wait approach never reached the level of ubiquity and reliability to make it worth a major rollout. Even platform-agnostic modes of interaction like scanning QR codes and AR applications apparently just weren’t elegant enough to get the job done. But with iBeacons, MLB may have finally found exactly what it’s looking for.

For now, though, the name of the game is fine-tuning. Evans noted these Bluetooth-powered experiences will start rolling out sometime in 2014, but it’ll be some time before the functionality spreads to the rest of the nation’s major league ballparks. After all, there’s a lot to consider when it comes to crafting a smart location-centric experience like the one demoed on that warm September afternoon. Part of the plan, naturally, has to encompass the sorts of content that users are given access to, but there are plenty of technical concerns to tackle, too.

Consider the issue of range, for one. MLB doesn’t want to accidentally trigger a response within the app if you’re too far away from an attraction or a point of interest. Even the materials used in the construction of the park can affect these radios’ reach, so each one has to have its power output and transmission rate tweaked so they can collectively hit the right spots. You can bet that Fenway Park — opened in 1912 and festooned with architectural holdovers from years past — is going to require a significantly different layout of Bluetooth transmitters than my native Citizens Bank Park (go Phils!).

If this sounds like a painstaking process, you’d be right, but Evans is convinced that taking the time to meticulously hone the hardware is well worth it.

“We’re baseball, we’re not a small startup,” Evans conceded. “We want to be nimble and quick and take new opportunities, but we also don’t want to roll something out that’s going to confuse fans.”