One of the more awkward things about AOL is the fact that its profits are still entirely driven by subscriptions and memberships. Given the subscription business’ roots in dial-up Internet, it’s not surprising that those revenues keep falling — but with the launch of a new service called Gathr, the company is trying to turn things around.

What are these new subscribers actually going to pay for? AOL (which owns TechCrunch) is pitching Gathr as a way to access your favorite online services in a single place for a discounted price, with partners including Pandora, iTunes, Redbox, and Amazon.

Bundling isn’t a new concept, but Paid Services and Membership President Bud Rosenthal argued that people think of it as “something that’s done for them.” When you pay for a cable TV bundle, you end up with lots of channels that you don’t care about. Or if you want a specific feature for your new car, it probably comes bundled with other features that are less important to you.

With Gathr, on the other hand, users get to choose the services. I currently count 19 of them in Gathr (Smith and Rosenthal said there are plenty more lined up), and users can combine any three, paying a combined $15 per month. Gathr also offers prepackaged bundles, tailored to different interests. For example, I’m trying out a “4 Fun” bundle that includes five one-day DVD rentals from Redbox (I don’t own any devices that can play DVDs, so, uh, maybe I should have thought this through), a subscription to Pandora’s ad-free service Pandora One, a $25 e-gift card to Restaurant.com, and a bonus $10 gift card with Amazon. 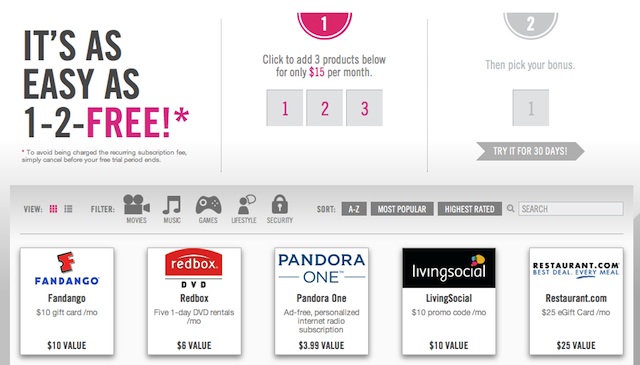 Entertainment is the category with “the sex and sizzle,” Rosenthal acknowledged, but Gathr goes beyond that, with partners such as Norton AntiVirus and LifeLock.

Behind the scenes, he said AOL is paying wholesale prices for these services, and everything on top of those prices is profit. He noted that many partners already have a big audience in the U.S., so continued domestic growth can be a challenge, and these discounts can help convince “fence sitters.” In addition, he said that even though Gathr offers users a dashboard for managing and accessing their subscriptions, those users also need to create accounts with and log into the partners’ services themselves: “We’re not disintermediating the partner and the consumers.”

Smith said that Gathr is currently in a “marketing beta” in Atlanta, Minneapolis and Seattle, with AOL testing out the response to a number of promotional tactics (including TV ads) before a broader national launch next year. Anyone in the U.S. can already sign up here, however.