Before the world was informed of the massive and invasive government spying programs run by the NSA and other countries, a mobile app called Burner appeared on the scene offering users disposable phone numbers which they could use to protect their privacy, or for other purposes. For example, the anonymity Burner provides makes sense for things like Craigslist postings or online dating, for when you need a virtual number while traveling, or for cheating on your…oh, um well, you know…other stuff. Today the company is announcing $2 million in new funding, led by Founder Collective and Venrock, along with a redesign for iOS 7 and updated feature set.

Other investors in the round include TenOneTen, run by L.A. angels Gil Elbaz and David Waxman. David Frankel of Founder Collective and Marissa Campise of Venrock will also now join Burner’s board. 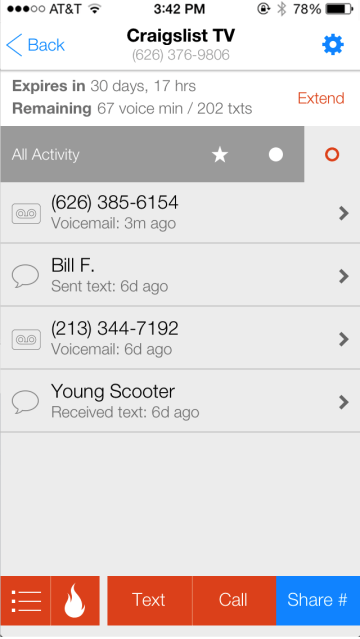 The app, developed by a startup called Ad Hoc Labs, is today available on both iOS and Android, and is fairly simple to use. To get started, you pick an area code for your Burner number and tell it which phone number to forward things to. The app lets you both place and receive calls, as well as send and receive SMS text messages. In addition, you can set up custom voicemail greetings, and configure different ringer and SMS notifications for each burner number you use.

With the new version of the application, the app has an iOS 7-friendly redesign with a focus on improved usability, Now the dashboard is the primary view in the application, allowing users to better manage multiple numbers, which can each have their own greetings, and voice and text message centers. Other improvements are focused on performance, as related to texting, address book integration, and number lookups.

The company generates revenue by selling packs of credits to users. For free, users get one-time trial for 1 day or 5 free voice calls or 15 free texts. To use the service more, they have to purchase other options that let them use Burner for a week or a month, or to make more calls or send more texts. This is where things can get a little murkier, since you don’t just buy a Burner pack for a set dollar amount, you have to purchase “credits” which in turn can be applied toward the various packs Burner sells. 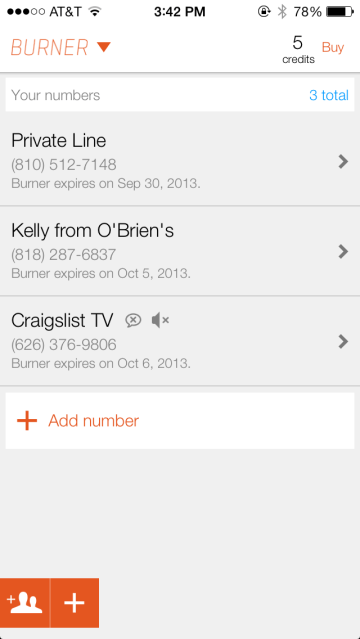 Competitors have taken advantage of this potential confusion around pricing to launch their own alternative apps. Burner even engaged in some finger-pointing in the past, referring to one competitor, Hushed, as “an obvious clone.” Hushed built on Twilio’s SDK, allowing it to quickly work in more countries, while Burner has instead limited itself to markets where it can offer numbers that look and act “real,” – that is, they respect the formatting and prefixing that some countries require, and they all support SMS. Today, it works in the U.S. and Canada.

While co-founder Greg Cohn declined to share current user numbers, he would say that the company has seen steady month-over-month growth and revenue since making the app a free download, as opposed to a paid app that came with pre-paid credits. These days, when users return to the app after their initial free calls and texts are spent, they have to convert to paying users to continue to use Burner, and many do. (The app ranks just over #200 in the Utilities category on iOS, and around the same in Google Play’s Communications category.)

Cohn also says that what’s interesting about Burner are the long-tail use cases. “We really see everything, from dating and Craigslist and things like that you might expect, to teachers, lawyers, musicians, midwives, people posting lost-dog posters, and even celebrities,” he says. Those who use Burner for Craigslist and other user-to-user transactions represent Burner’s largest customer base, but for a lot of Burner’s users, it’s not just about having a throwaway number on hand. “Knowing you can burn a number if you want to is sometimes more important than actually burning it,” Cohn explains.

Longer term, the focus for Burner is on more than just disposable, private numbers, but on building technology where phone numbers are smarter and act more like software, he says.

The company today has fewer than ten people, and with the additional funding, they will begin hiring immediately, mainly engineers. Plus, having its own revenue streams to tap into will allow the company to also focus on other growth opportunities, including customer acquisition and distribution.

Burner’s funding comes at a time when there’s a surge of growth in the mobile messaging space with dozens of applications fighting to become the software-based alternative to traditional phone behaviors like calls and SMS. These range from consumer-focused, social apps (e.g., Whatsapp, LINE, Snapchat, Viber, WeChat, Path, etc.) to those aiming for business customers (e.g., SendHub, Ansa, etc.), and everything in between (e.g., Voxer, GroupMe, Hangouts, etc.). Burner fits in this large lot as the tool to handle everyday transactions via your mobile phone, where you need to communicate with those who aren’t friends, family or colleagues.

“We’ve barely scratched the surface of privacy and identity on mobile, and carrier telephony is a ridiculously large market that doesn’t do innovation too well,” says Cohn. “There’s a lot of opportunity here, broadly speaking, and we believe our approach to having a voice-and-text communications vector that’s not carrier- or social-network-based is very attractive to a lot of people — as evidenced that people are willing to pay us for it.”