Click a link, click a petition, feel better without making a difference. That was the old Causes. Today, the new Causes launches to reactivate its 186 million registered million users. It’s an independent civic social network pushing education, donations, and pledged behavior changes, rather than a patchwork of campaigns tethered to Facebook. And it’s got a serious native advertising strategy.

“We believe there will be special purpose but deep social networks around specific parts of your identity” Causes CEO Matt Mahan tells me. “We think your purpose or civic identity is a core part that’s currently underserved.”

The plan continues to be serving up Causes as a for-profit business. It wants to make the world a better place, but by raising $16.4 million on the promise it will make money, it could hire better talent and more quickly scale its contribution to the world. 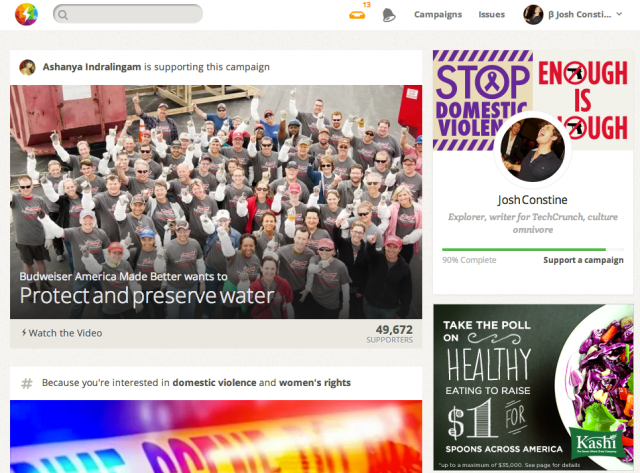 A Lot Of Bark, Not Enough Bite

The mission to connect people in support of common causes started back in 2007 when the startup was one of the launch partners for the Facebook platform. Founded by two former employees, Joe Green (now President of FWD.us) and Sean Parker (investor and serial entrepreneur) with a Series A from Founders Fund. Causes’ head start and the lucrative viral channels Facebook offered at the time let it quickly sign up droves of users.

The problem was they weren’t as getting much done as they could. In six years, the 186 million users did raise $48 million for non-profits and add 34 million signatures to petitions for grassroots campaigns, but much of their potential went unrealized.

Most people (me included) were delivered to Causes campaigns through Facebook Requests or wall posts their friends spammed them with, signed or gave a little money, and never came back. Few took the time to really understand what they were supporting. Save the whales? Sure. Click. Stop human trafficking? Here’s $10. Maybe I’ll see ya again in 17 months, Causes.

By this year, Causes had  60 employees and revenue in the millions thanks to display ads and sponsored campaigns, but had failed to become cash-flow positive and was still relying on its venture funding. It’s founders were no longer involved day to day. And its engagement had dwindled to just 6 million users per month — a measly 3% of its registered users.

Causes needed fresh blood, and found it by acquiring Votizen, another Sean Parker-backed company. Votizen converted people’s political vigor into influence, letting them encourage their like-minded friends to vote in elections. Its co-founder Jason Putorti was renowned for his classy, engaging designs. The deal was closed in January by Causes’ newly promoted CEO Matt Mahan. Him and Putorti set out to redefine Causes.

Today their vision goes into production. The old Causes Facebook app will stick around for now, so veteran users don’t have to worry about their campaigns disappearing, but its the new Causes.com where things are really happening.

Already aboard are organizations such as World Wildlife Fund, Iraq and Afghanistan Veterans of America, and San Francisco Bicycle Coalition, as well as brands like Toyota and Kashi. Causes has also tapped celebrities with long track records of social good support including Forrest Gump’s Lt. Dan aka Gary Sinise who backs veterans campaigns, and wounded U.S. Congresswoman Gabby Giffords who fights for gun safety.

To start on Causes.com, you don’t have to login with Facebook anymore. It’s an “independent” social network that lets create a unique social graph around good, and sign up with just an email address. Then you pick a few digital “bumper stickers” that will represent your ideals on your Causes profile. Really, though, this is a lightweight way to get you to tell Causes what you’re into so it can suggest organizations and people for you to follow. It’s a savvy on-boarding flow that makes sure your feed is full of relevant projects.

That brings us to the homepage feed where you’ll see intelligent suggestions of campaigns to take part in based on what you follow. That includes making a donation, taking a pledge to do something like join an offline boycott, or watch the video for a brand-sponsored campaign which triggers a $1 donation from that brand.

While Causes would love its feed to be part of your daily routine, Mahan admits to me that “The way most people will get into a campaign is by seeing a piece of content syndicated through Facebook, LinkedIn, Twitter, and email” or from a brand they’re connected to elsewhere. The goal is for Causes to proliferate horizontally instead of just top-down from organizers themselves.

That’s why Causes campaign pages are focused just as much on content contributed by supporters as by the admins. The top shows an official image, description, and call to action that explains how you can help, but the bottom is a feed of user generated content aiming to inspire and educate people about the project. In hopes of showing people their impact and encouraging contribution, each post displays the number of views and actions it’s driven. 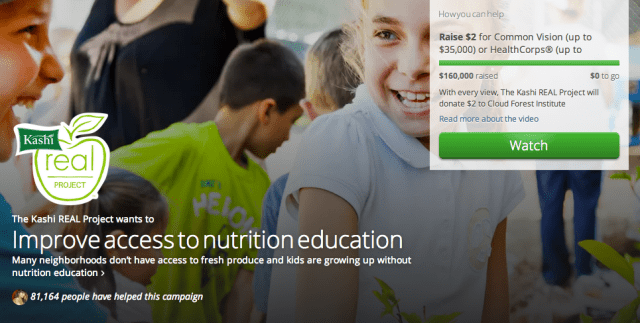 To become a formal supporter who can invite friends and post to a campaigns feed, people actually have to take action on behalf of a cause. Mahan tells me “We want the notion of supporting to be heavier and more meaningful than Liking or following on Facebook and Twitter. It’s standing with people whose beliefs you back and you want to take action with. It should be the beginning of a relationship of collective action.”

The big new feature in the revamped Causes is the ability to create your own personal sub-page for any campaign. Here you can pledge to rally a certain number of actions, say $1000 in donations or 50 people confirming they’ll boycott a bad business. You can tell your own story about why an initiative is important to you, and invite friends. These personal pages turn anyone into a grassroots organizer.

Overall, the new Causes looks nice and could get a lot more done on behalf of social good movements than the old version. However, navigation feels a bit clunky and counter-intuitive, and it can be a bit confusing knowing if you should be adding content to a campaign or friend’s personal page. The core challenge for Causes will be making its new site either viral enough to stay top of mind via constant shares to other social networks, or changing people’s behavior so they stop by Causes naturally.

If Causes can reactivate its tuned-out users and convince them to spend significant time on the site, it’s got a serious plan to earn money. Mahan explains “People are skeptical of advertising” but Causes can offer businesses a different way to connect. “We’re giving them a new, deep, rich way of building relationships with millions” say Mahan. 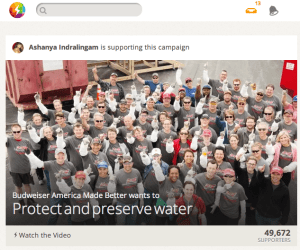 Instead of ads where click-throughs lead to a product page, Causes is building out native ad units in the form of sponsored campaigns. Rather than try to aggressively sell its beer, Budweiser can show people that it funds clean water projects. When people pledge support by watching a video informing them about why clean water is important, Budweiser gives a dollar on their behalf. It might have already planned to give that dollar, but by tying the donation to someone’s action, they feel like the beer company helped them make a difference, and their affinity for the brand grows.

Causes will be recommending these sponsored campaigns in the home feed, on topic pages, and in search. In some cases they’ll look like Facebook’s Sponsored Stories, where the ads highlight a friend connected to the brand’s campaign. For now on its desktop site Causes will also show more traditional display ads for social good organizations and campaigns, but Mahan tells me that native advertising is its focus going forward. That’s because these native units will fit well as users shift to mobile where there’s no room for old-school banners.

This business model also sets it apart from competing social good sites who make money in less scrupulous ways. “If you survey the space — Petitionsite, Change.org, Rally — they’re either taking a cut of donations or selling contacts, or doing both. We’ve decided to go with native ad units” says Mahan. That means when you sign a petition, your email address will never be sold to donation solicitors, and Causes uses Network For Good to process credit card payments at cost so as much money as possible goes to what you support. Still, it’s a crowded space with sites like Jumo, HopeMob, Google’s OneToday, and topic-specific sites vying for people’s pledges and donations.

In the end, Causes‘ idealism is its greatest strength, but also its greatest threat. Setting a barrier of action to joining a Cause ensures people really care about what they say they do, but it also creates a hurdle to sharing and growth. If it can consistently deliver relevant campaigns for us to care about, and refine its design to be more intuitive, the impetus will fall on us to make social good a part of our every day lives.