Apple’s iPhone needs a much smarter keyboard. I’ve said it before, but here’s evidence Cupertino itself realises that hen-pecking individual letters is a “tedious task”. Apple’s US patent 8,542,206 (spotted by AppleInsider) describes an alternative text input method for iOS that incorporates a series of swipe gestures to make touchscreen typing less of a chore.

Interspersing the tedious task of typing using the small keys with swipes that do not require a specific point of origin can give users a nice break from the sensorimotor and cognitive load of targeting very tiny keys.

The patent’s inventors are listed as Wayne Carl Westerman, Henri Lamiraux and Matthew Evan Dreisbach. According to LinkedIn, all three still work at Apple: Westerman is a MultiTouch Architect at Apple; Lamiraux is Engineering Vice President iOS Apps & Frameworks at Apple; and Dreisbach is listed as a lead software engineer in the iOS Test Automation division.

Interestingly, although it’s just been published online the patent was filed way back in June 2007, the year the original iPhone debuted, which suggests that even though Apple has been looking at ways to evolve the traditional keyboard input method for the touchscreen, it’s either rejected these alternatives, or continues to attempt to perfect them — perhaps also wanting to make sure its users are ready to rethink how they type.

Over the last six+ years, however, the rival Android ecosystem has allowed a plethora of alternative keyboards to sprout forth — including Swype, which replaces taps entirely with swipes to form words (it was preloaded on some 100 million Android devices last year). Since Swype, and its big rival SwiftKey, made it big, a raft of other keyboards startups have also pushed into the space — offering a smorgasbord of radical alternatives to traditional typing, including invisible keyboards, space-saver keyboards, eyes-free keyboards and (most recently) a tablet-keyboard with floating keys.

Even foot-dragging mobile maker BlackBerry, which took far too long to wean itself off physical QWERTYs, incorporated some gestures into its BB10 touchscreen keyboard at the start of this year — supporting flicks to select suggested words on its all-touch devices (not that BB10 has been able to revive BlackBerry’s fortunes).

All of which makes Apple the undeniable keyboard conservative in the touchscreen typing pool. iOS’s immoveable, tap-thirsty keys remain the single most annoying thing about the OS in my view. Cupertino also does not allow third party keyboards to be installed — retaining control over that portion of its OS, even though that means its users get left behind all the flick-tastic keyboard innovation (the best you can do on iOS is use an alternative keyboard within an individual app).

Despite its ongoing appreciation of traditional, tap-based typing, the Apple patent — which is titled ‘Swipe gestures for touch screen keyboards’ — indicates that Cupertino has at least considered ways to evolve its keyboard software to make typing on iOS a less  old-fashioned experience.

The patent’s main focus is on describing a hybrid method of text input which replaces a limited sub-sect of typing functions (such as inserting spaces or punctuation) with swipe gestures:

For example, leftward, rightward, upward, and downward swipes can be assigned to inserting a space, backspacing, shifting (as for typing capital letters), and inserting a carriage return and/or new line.

Adding a few gestures to the iOS keyboard may speed up typing slightly but the speed gains would likely be offset by the requirements to educate the user about the new gesture-based shortcuts, and perhaps also provide on-screen signposts to keep things flowing. Which may well explain why Apple hasn’t incorporated gestures into its keyboard software, a full six years after the patent was filed.

The patent document notes that the swipe gestures it details are intended to be performed “across a plurality of keys on the virtual keyboard while the virtual keyboard is displayed” — and could be supplemented by “feedback” to indicate to the user the function has been successfully performed.

The patent also suggests users could customise swipe gestures to create their own shortcuts, and describes how “multi-fingered swipe gestures” could be used to “invoke additional functionality” — such as word deletion, inserting elements like punctuation and spaces, or calling up additional keyboards (such as numbers, or special symbols).

Although much of the patent focuses on a set of apparently supplementary swipe gestures — which could presumably augment traditional tap-based typing — the document also details a touch image processing system that could use “finger path tracking” to input individual letters by translating the finger’s path into a series of individual keyboard taps. This method sounds very much like the current Swype/SwiftKey Flow text input systems. 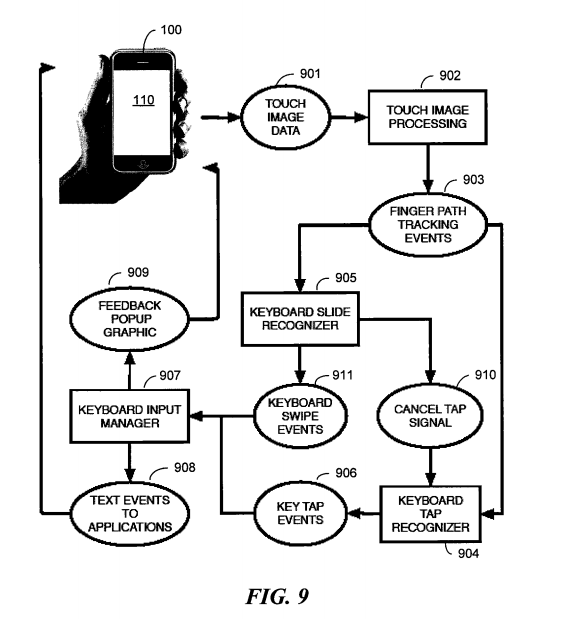 Again, it’s unclear why Apple hasn’t implemented a path tracking system on iOS to allow for Swype-style text input, despite showing such early interest in what has since gone on to become a very popular text-input method on the Android platform (and elsewhere).

However, the existence of the patent itself — while interesting — is not in itself evidence that Cupertino was or is serious about making such radical changes to typing on iOS. Apple frequently files patents — the vast majority of which don’t end up going anywhere, let alone making it into a shipping product.  Patents can be filed defensively, or just to cover off exploratory ideas. Patent filings are therefore at best just a guide to the areas that a company thinks interesting/have potential at a given moment in time (in this case, that moment was six years ago…).

And, at the end of the day, while a minority of word-loving people (like me) do find iOS’s keyboard irritatingly slow, it’s worth remembering that the company just sold nine million of its newest iOS products over their launch weekend. So, arguably, the ‘if it ain’t broke, don’t fix it’ rule applies — especially as typing is such an integral function to overall device experience/performance.