Previously, Microsoft touted that it had signed up its first 1 million consumer subscribers for Office 365 Home Premium in 100 days. It has been 113 days since it announced the 1 million figure. So Microsoft, presuming that it reached the 2 million mark today, is adding subscribers at almost the same pace as it did around the launch period.

Office 365, Microsoft said today, was (as a total product) the fastest Microsoft service to $1 billion in yearly revenue run rate in the history of the company. Here’s the slide that details the 2 million figure: 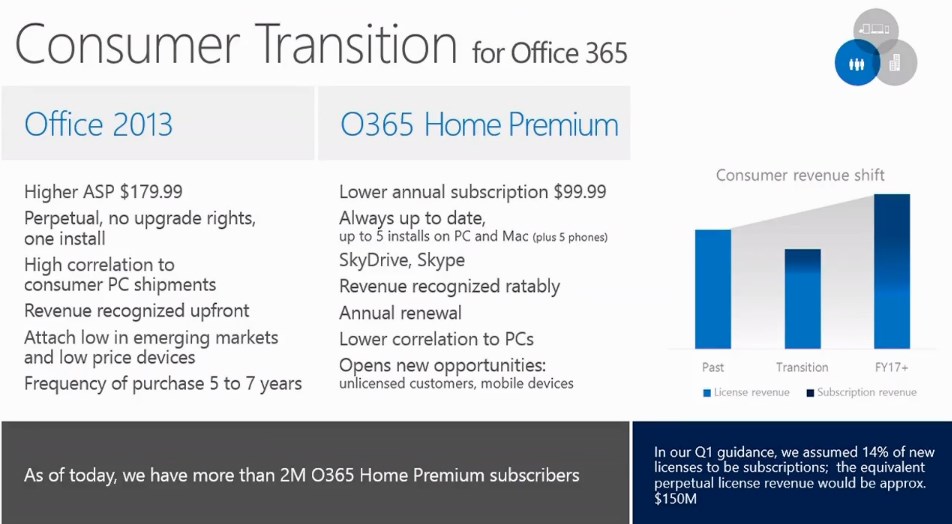 What’s quite interesting is that Microsoft forecasts that it will suffer from short-term revenue declines by switching to subscription revenue from licensing revenue. The bar graph on the lower right side of the chart indicates that revenue will be negatively impacted for several years, until fiscal 2017 and beyond.

This is admission that the company will suffer short-term from its decision to embrace a new business model. But, the company is wagering that the transition is worth the cost long-term, likely due to the fact that its formerly successful method of selling Software in a Box is rapidly fading.

Adobe, also in the period of transition from single-license sales of software to subscription-based services, is seeing its revenue decline year over year. I would wager that this will be a trend that we will see repeated across all large firms that move to a subscription model from their prior business practices.

Finally, it’s worth noting that Microsoft has managed to move several customer categories to subscription-based Office products in parallel. This indicates that Microsoft might not have an impossible time in its soul-defining mission to sell services and not software.