Microsoft, like other public companies, doesn’t like to disclose more about its business than it has to, but in the middle of a reorganization and a very public CEO search, a little openness could go far to settling the nerves of jittery investors. Today at its analyst nerdmoot, the company showed three charts that strip down its business into its component parts.

Here’s the slide that Microsoft showed to analysts in Redmond and to the press via a slightly wonky livestream: 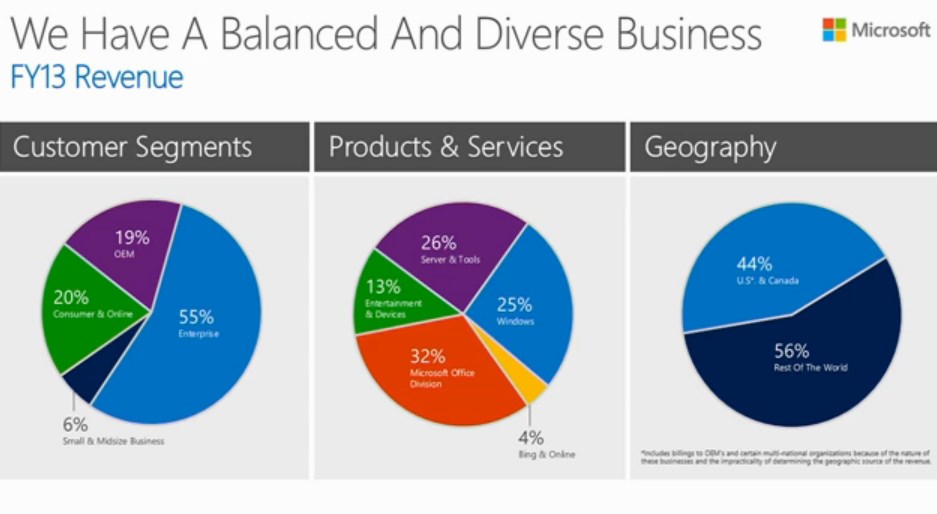 This is very interesting data. The first graph shows that Microsoft’s revenue is more than half enterprise-sourced. From that perspective, Microsoft could be viewed as an enterprise-facing company that dabbles in consumer technology.

And, given that the OEM business of Microsoft could be called “enterprise” revenue, Microsoft is all the more lopsided. Another take: If you count OEM incomes as enterprise-sourced, and discount small-business incomes, Microsoft is only slightly more than one-fifth consumer-derived from a revenue perspective. That’s a sliver.

Moving to the second graph, Windows is now the third-largest revenue driver for Microsoft. The growth of Server and Tools and the continued strength of the Office division make the changing guard unsurprising. But it’s also worth noting that the weakness of the PC market contributed to the slippage of Windows as the leading piece of Microsoft.

Just as small and medium business revenue is minor from a whole corporation perspective, so too does the Bing and Online revenue category remain essentially a rounding error. Microsoft is investing heavily in this area, but in terms of it becoming a primal component of the Microsoft revenue mix, it simply isn’t.

Finally, geographic share: 56 percent of Microsoft’s revenue comes from “Rest of The World,” which means every place that is not the United States or Canada. It seems likely that international revenue will grow its share of the Microsoft revenue mix. China, Microsoft’s Kevin Turner (COO) stated during his talk, is the company’s fastest-growing market.

What can take away from all this? That Microsoft’s enterprise business units are subsidizing its work to grow its consumer products, like Bing, Windows Phone, and the like. Also, the scale of the Office division is key for Microsoft’s aggregate size – challenges to its status as cash cow must be viewed as almost existential threats to its ability to invest in new products. So, what Box is up to and Google’s work to assault Office on mobile devices should be treated as extremely serious.

Microsoft’s analyst meeting is underway, and we’ll have more for you soon.