Apple’s big iOS 7 update rolled out to devices yesterday, around 1 p.m. ET, and while many users encountered a lot of frustrating server errors trying to get it, the numbers show that a lot of people were successful in updating. Like, a whole lot.

We’ve gathered results from a number of mobile publishing firms to find out what the numbers look like after 24 hours, and the trends indicate a very rapid rate of adoption. Chitika says that iOS 7 generated just over 18 percent of traffic from North American users on their platform over the past 24 hours, which beats out the iOS 6 first day update stats. Their study covers around 300 million page views from devices in the U.S. and Canada, and revealed that a day in, there were more users on iOS 7 than there were one day into the iOS 6 launch by about three percentage points. 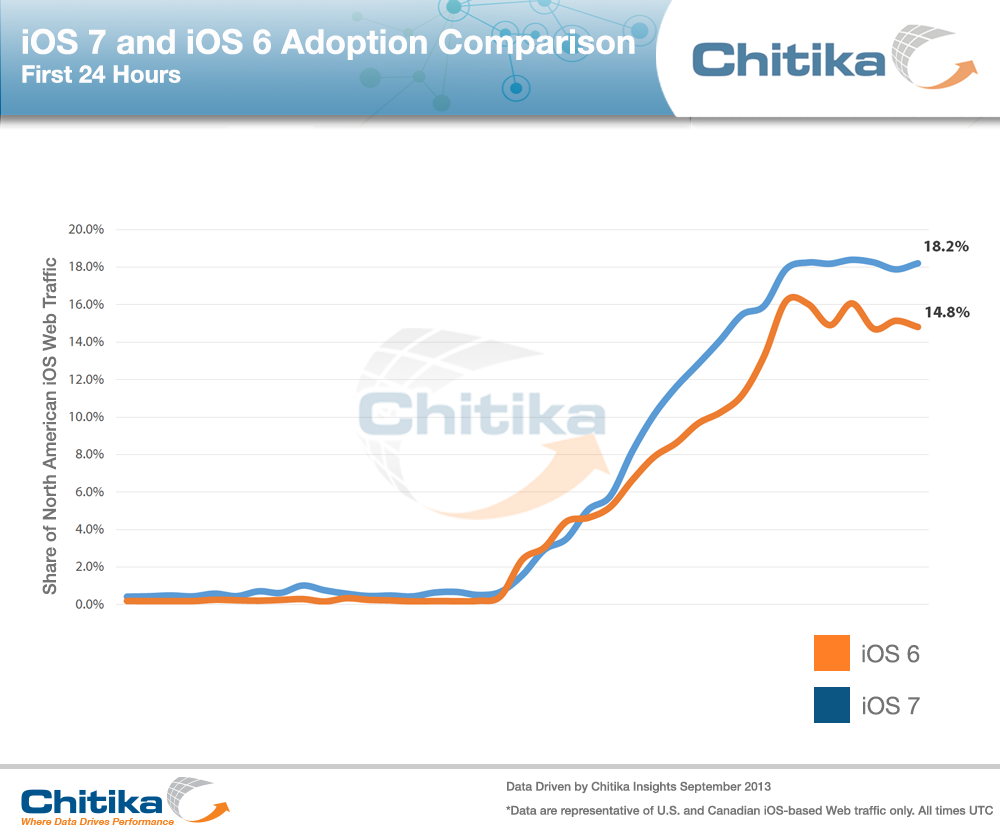 Mobile web and app analytics provider Mixpanel has been watching the iOS 7 uptake in real time, and has found that within the first 24 hours, devices running iOS 7 hitting its network reached 35 percent. The firm also found that many people updated during the workday (with 22 percent on iOS in the 10 hours following its launch), and that many more were updating late into the night Pacific time, with another 10 percent coming on between 10 p.m. and 8 a.m. PT. Predicting adoption based on the current rate, Mixpanel says iOS 7 could exceed iOS 6 activity on its network by this time tomorrow. Android, by comparison, still sees Jelly Bean (all versions) accounting for only 57 percent of traffic on the Mixpanel network, a full 450 days after the first version’s launch. 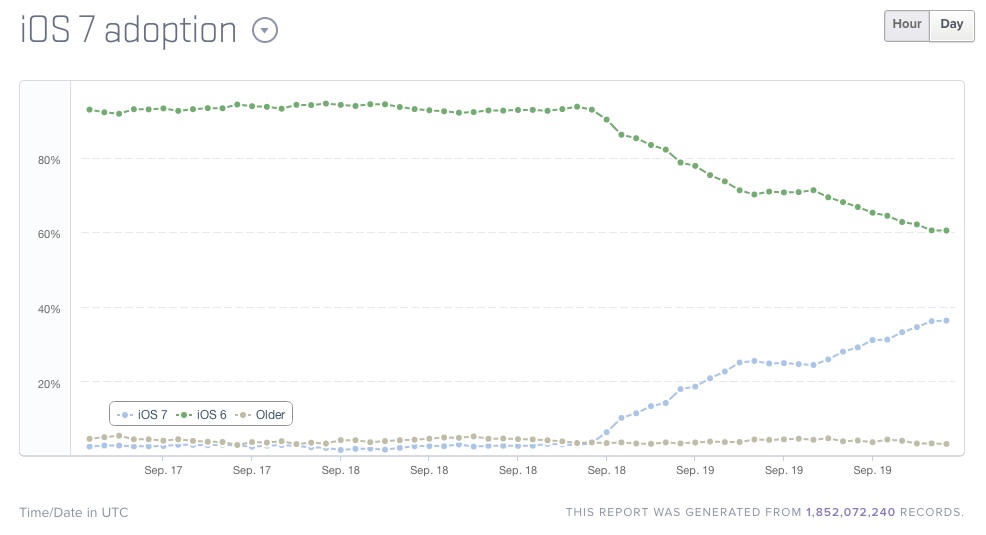 Mixpanel’s data is coming from nearly 2 billion impression records, distributed equally among all of its clients so as not to skew the data by relying too heavily on, say, an iPhone or Apple-focused blog’s mobile website or app.

Mobile and tablet website optimization company Onswipe has also been watching the numbers on its platform, and their sample size of around 1 million unique iOS devices reveals that around 31.27 percent of users are already on iOS 7. iPhone adoption is slightly ahead with 34.04 percent of total traffic coming from iOS 7, while on iPads visitors with the latest OS represent 26.12 percent of the pie. Both are up from last year and iOS 6, when 14.18 percent of iPads and 27.04 percent of iPhones had updated to iOS 6 24 hours in, making for a total of 24.77 percent of users across all devices. 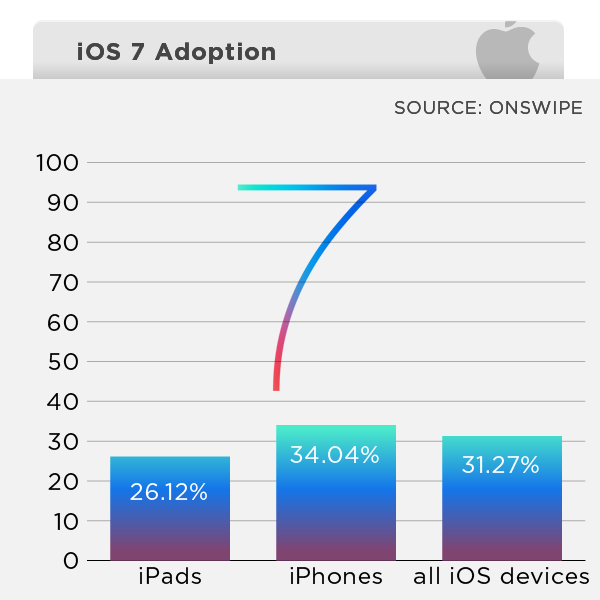 “iOS 7 is getting such rapid adoption because it’s like getting a brand new phone instantly and for free,” Onswipe CEO Jason Baptiste told me via email. “Its adoption is also being accelerated by developers pushing a brand new iOS 7 redesign to their large user bases.”

This adoption is definitely unmatched by any other platform and its updates, mobile or otherwise. Apple has a key advantage here not only because it issues updates over-the-air, meaning users can get them wherever they’re connected to a Wi-Fi network instead of having to tether to their computers, but also because of Apple’s unprecedented and unmatched relationship with its carrier partners.

There’s a side benefit for developers who jump on early, too: Users new to iOS 7 are hungry for software that complements it, and those app makers who’ve made the switch to iOS 7-specific designs are seeing big download boosts thanks to both consumer interest and promotional efforts from Apple. The iPhone-maker has been highlighting iOS 7-ready apps and updates in its iPad and iPhone App Store ever since the update went live, and some of those apps, like OminiFocus2 and NBC, have seen their chart positions rise as a result.

In short, Apple’s adoption rates aren’t suffering because of the big changes in iOS 7, as some had suspected, and in fact the shift seems to be drawing in a more eager crowd with a very healthy appetite for apps. We’re just a day into this, however, which means that so far the numbers could reflect an outsized portion of early adopters anyway. We’ll be watching these numbers to see if they continue to mirror or exceed previous adoption trajectories for new iOS updates, or if there’s any indication the wider public is more update-shy.