Amid preparations for its forthcoming IPO, Twitter rolled out updated iOS applications today which feature several small changes, including of course an updated design to better reflect the new style of Apple’s iOS 7 mobile operating system. But these updates are merely a hint of what’s ahead for the company in its push to make its products more mainstream-friendly.

The service, which now boasts some 200 million users, announced the launch of the upgraded applications on its company blog, noting how its apps are now integrated with core iOS features. For example, Apple’s push-button assistant Siri can search Twitter for tweets about people or topics. Apple’s web browser, Safari, incorporates something called “Shared Links” to highlight news that’s making the rounds on Twitter’s network, and the Music app will display songs trending on Twitter through the Twitter #music station on iOS 7’s Pandora-like service, iTunes Radio.

Though these will be welcome changes for most Twitter users (unlike, perhaps, that blue line connecting conversations!), the company has been testing a much grander app redesign behind closed doors.

Those participating in Twitter’s beta testing program on Android have already seen a hint of what’s to come, which includes a radical revamp of the Twitter interface that will eliminate the standard four buttons at the bottom (Home, Connect, Discover and Me) in favor of a “swipeable” menu at the top which lets you move between streams.

Currently, that Android beta (see below) includes streams like Home, Notifications, Messages, Activity, Trending, Find People, and Me – quite a collection of choices for a company that’s trying to distill the experience for simplicity. Of course, this beta build, though likely representative of the general direction Twitter is heading given its goal to make the product consistent across platforms, could very well change between now and the final launch. 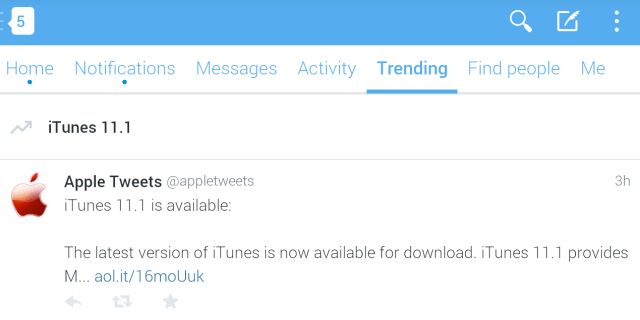 In addition, the company is reported to be working on an interface featuring richer media-filled streams, and even a way to tune into Twitter while watching TV to see related tweets and conversations.

Twitter has been betting big on TV integrations as a way to reach a broader audience as well as generate ad revenue, and has already been testing things like a “TV trending” box at the top of users’ Twitter timelines. And earlier this summer, CEO Dick Costolo spoke of a “live events” tool which would let users scroll back in time to see spikes in conversations around some sort of planned event or breaking news. In terms of television programming, he described the events option as being able to “follow along with Twitter in a DVR mode.”

These more interesting features and user interface changes are not available in today’s iOS 7 update, as Twitter has smartly decided not to pile on with every other tech company under the sun with what may one of its biggest product updates of the year. But in the meantime, you can grab Twitter’s latest app upgrades here in iTunes.