Thanks to the ubiquitous spread of smartphones, and the ease of photo-taking they bring, our photo galleries have become filled with what are almost like disposable memories. We snap and share, but then never return and reminisce. New York-based Memoir, a new app launching today on iOS first, wants to change that by offering a way to time travel through your past, allowing you to rediscover who, when and where you’ve been before, and connect you with others who shared those experiences with you.

If that overall goal is a bit too intangible for you, then think of Memoir as a photo-sharing utility instead. The app asks for access to your photo gallery and location, and connects to services like Facebook, Instagram and Foursquare in order to group and organize the photos you’ve taken before. And if you want to import your entire photo archive from your computer, there’s a Mac utility, as well.

If Google Now is the proactive search utility that alerts you to things you need to know before you look them up, like flight times or traffic conditions, then Memoir is the photo-sharing equivalent. Unlike other photo-sharing apps where there is a lot of manual labor involved — creating and naming albums, tagging friends, curating galleries, etc. — Memoir simply taps into the efforts, however minimal, you’ve taken in the past.

You don’t have to start using Memoir as your default camera app on your phone to take advantage of the service (though you could). Rather, you can choose to be passively notified of your photo memories when the conditions are right.

For example, if you visit a favorite restaurant you haven’t been to in a while, it can alert you to that and display the photos you took of the amazing meal you had while you were there. Or if you’re hanging out with an old friend you haven’t seen in a long time, it can remind you of the last time you were together and the photos you took at the time. Also, similar to other services like Timehop or Everpix, Memoir lets you look into the past to see what you were doing on this same day years ago.

While you can certainly use Memoir in a “set it and forget it” mode, where you wait to have your memory jogged at just the right moment, the app functions well as an advanced photo search utility, too.

Since the connections that Memoir has to make involve more data science than your typical photo-sharing app, it can take advantage of its deeper understanding of the who, what, when, where and other contexts (e.g. calendar events) to help you better search through your photos, allowing for advanced queries like that time I was with John and Jane in San Francisco, for example. This is actually a powerful tool, and not one you’ll find in the majority of photo-sharing applications today.

“Basically, what we’re doing is we take all these little data points — every photo you’ve ever taken, the location, anything you’ve ever put online socially, your calendar — and we’re making these cohesive memories that we play back to you when it’s most nostalgically relevant, and all searchable in a way they’ve never been searchable before,” explains Memoir co-founder and CEO Lee Hoffman. 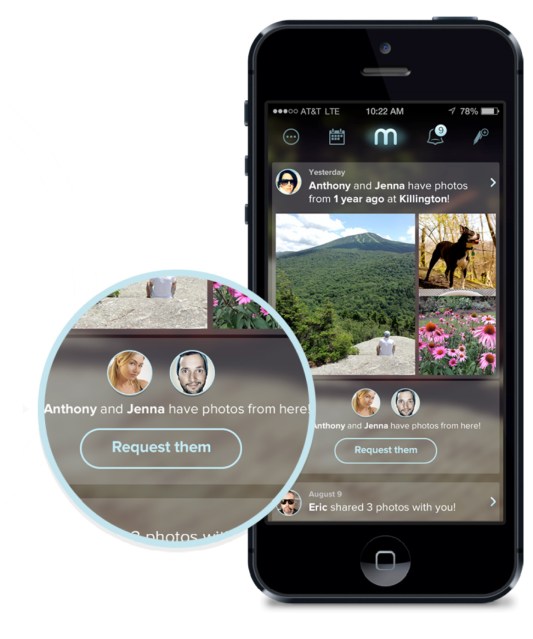 And as you’re alerted to the photo memories belonging to your friends, you can also request a copy of those photos via the app, which will notify your friend on your behalf. The friend can then launch Memoir to facilitate that request. This is something of a different take on the shared photo album concept, which a number of startups have tried tackling in recent months, including Flock (from Bump, which just exited to Google this week), as well as others like Cluster, Tracks, Albumatic, Flayvr, and many more, to varying degrees of success.

Memoir also serves as an alternative to iCloud, backing up all your photos privately to its servers. In this way, it competes with startups like Loom, and larger photo-sharing and storage sites like Flickr, Dropbox and, yes, Google+ and Facebook, which also offer automatic uploads. Memoir will back up photos in iPhone resolution for free, but those who want to save HD copies or videos will have to pay premium prices (not yet set).

Though the pricing is competitive and Memoir is differentiated from others in this space, few photo-sharing startups are making it as standalone companies these days. Many exit to industry giants, like Google, Facebook, Dropbox, Yahoo and Shutterfly, or they simply shut down. That track record could make early adopters hesitant to trust these apps with tasks as valuable as photo storage and retrieval, which in turn leads to adoption of photo apps that are more like toys than genuine technology breakthroughs.

Memoir, co-founded by Angela Kim, and now a team of about a half-dozen, raised $1.2 million in seed funding for an earlier concept unrelated to photo-sharing in the education space called Veri. Investors in the round included Betaworks, SV Angel, Lerer Ventures, Thrive Capital, David Tisch, Joel Spolsky, Steve Cheney, and others.

Memoir is available here on iTunes.