Is the 3D modeling space big enough for multiple competitors? Martijn Elserman, Siert Wijnia and Erik de Bruijn sure think so. They’re the founders of a new 3D object sharing site called YouMagine and were the creators of the Ultimaker, a $1,500 3D printer that comes in kit form and is a favorite with the DIY set.

The Ultimaker system is open-source and self-funded and some of the profits have been rolled back into R&D and for the creation of YouMagine.

“We invested in YouMagine because we believe in a sharing platform that is about more than just files,” said de Bruijn. “Its audience will grow as designs are there, designers are attracted when there’s an audience. While this seems like a chicken and egg situation, in the Ultimaker community there are thousands of passionate 3D printer users, many of which are designers. We told our friends in the community that we were developing YouMagine and they have just started seeding the site with amazing designs.”

He sees his site as something a bit different and an opportunity for a fresh start. “One of the biggest criticisms to Thingiverse is that it’s full of nearly identical iPhone cases,” he said. “There are more and more 3D design sites popping up. Lots of them show gears and RepRap parts, which in my opinion are awesome, but just aren’t for everybody. Our site is much more diverse in terms of its content, because contributors are often Ultimaker owners who don’t need to be tech people to use their printer.”

While 3D printing is still in its infancy, it’s also interestingly entrenched. There are a few major players – Makerbot and RepRap being the two names most often mentioned – but few have cracked the 3D model sharing business like Makerbot. However, because Thingiverse is a Makerbot property, the assumption is that the models there print best on a Replicator. While not true, perception is often the rule here.

To that end, the folks at Ultimaker have added a number of features which encourage the use of their own printer. Most interesting is their effort to add “wireless printing” to the website.

“We’re developing the site for the community, so we listen to their feedback to make it cater to the community’s needs. And we release an update with new functionality every other week. Also, we’re working on single-click, wireless 3D printing capabilities which are already working in the lab with the Ultimaker² and is even backwards compatible with the Ultimaker Original. All the complicated stuff happens in the cloud, you don’t need to worry about that or understand it. You don’t need to download or open a design, just hit print on YouMagine,” said de Bruijn. 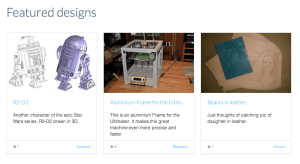 They’ve seen 400 designs uploaded so far and the site sees itself as a clearinghouse for all 3D modelers, not just Ultimaker or Makerbot fanatics. There aren’t many compelling things up there just yet – except this – but the plan is to offer a full range of 3D modeling tools as well as support multi-material prints and other cool tweaks that will make the YouMagine experience superior. Some creators are even making their models YouMagine-exclusive, an interesting choice. Will it take off? Well, Thingiverse hit 100,000 items in June so they have a bit of a hike.

“We believe sharing is fun, and at the same time it created the RepRap project to which Ultimaker founders were core contributors. RepRap, in turn, has created the whole desktop 3D printing revolution of Makerbot, Printrbot and Ultimaker. While some have thrown open source over board, we prefer to do the opposite by investing more in the community. YouMagine is an example of this commitment,” said de Bruijn.