Instagram is not yet launching ads on its photo and video-sharing network, but it has plans to in the next year. This evening Kevin Systrom, its co-founder and CEO, made an appearance in London where he described how in some ways it is already on the way there.

On Monday, Systrom went to watch a presentation of the Spring/Summer 2014 collection from Burberry as part of London Fashion Week, where he was joined by Andrew Bosworth, who runs all ads for Facebook. On Tuesday, in a conversation with supermodel and entrepreneur Lily Cole at the National Portrait Gallery (where there are Instagram photos and videos blown up and displayed on the walls right now), Systrom spoke about how that event prompted a bigger conversation about the role of commerce and ads on Instagram, and how far they will go.

Cole is an A-lister in the paparazzi-filled UK, and knows a thing or two about having her image appropriated for commercial use even when she doesn’t intend for it to be. She asked Systrom if that concerns him, the difference between artistic and commercial use of imagery. “Is there a problem with that boundary?”

“I don’t think it’s so much a boundary as it is a balance,” Systrom replied. “If Instagram were full of commerce and there were ‘Buy now!’ links everywhere and that’s all you ever had, I don’t think it would get to the true spirit of communication.”

But how Instagram is already being used by brands could be a clue to how Instagram will approach ads, when they come. Systrom’s comments point to a soft-touch approach, where users may be given options to follow advertising, rather than have ads thrust upon them.

“I’ve seen plenty of times when a brand, whether it’s Kate Spade or Cole Hahn, they’ll post an image of some shoes, and the comments are 50 people asking, ‘Where do I get these?’ ‘What sizes do they come in?’ ‘Do they come in this other color?’ ‘When are they available?’ And that’s awesome. It’s not just about imagery, that’s about the conversation as well… As long as you curate what you want to follow and don’t want to follow that’s really the balance.”

He also pointed out the bigger commerce opportunity on the platform. “Businesses have been started because of Instagram, not just photos that we are seeing here [in the NPG],” he noted, citing the story of Strght Skateboards, started through images posted Instagram. “That’s the power of sharing that imagery. That can inspire entrepreneurs. In some ways, business balanced with art is the world we live in and Instagram is just a mirror representation.” 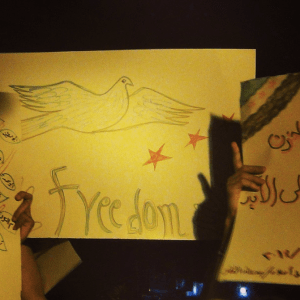 Later, the conversation wandered away from commerce and fashion, and into more serious waters: Instagram as a political force — fitting fodder in a gallery hung with portraits of the great and the good from UK history. “There are a handful of examples,” he noted, citing how a user called Drew Kelly used his Instagram account to provide some of the first pictures from North Korea at a time when it was closed off to the media; similarly Syrian_developer also provided insight into the struggle there, well before the problems in Syria became a more prominent part of our collective consciousness and national discourse.

“One of the fascinating things is that Instagram is still available everywhere,” Systrom noted (coincidentally, on the same day that Iran once again slammed a wall around Twitter and Facebook after a brief glitch broke it a few hours).

“The history of social media is that [the sites] are blocked in certain countries where freedom of expression is not encouraged.” Instagram, perhaps because of the picture-nature of it, hasn’t been touched, and it “is giving people a visual voice. It’s a way of taking that image and broadcasting that to the world. In some ways that’s the most exciting part of Instagram.”

But while Twitter has taken an early move to verify users on its site — one way of both crystalizing powerbrokers and another of just making sure people are who they say they are — Instagram is not going there, yet.

“My question is how do we verify,” he told me later in response to questions about possible moves. “I don’t think verified accounts could solve the problem of knowing people are posting from where they say they are, but I do agree that verified accounts in general, when you’re trying to find a celebrity or politician, eventually I see that as a possibility. But we’re trying to fix the real problem, which is search quality.” He notes that it helps Instagram to be a part of Facebook, where people use real identities (which leads one to wonder if profiles may one day be merged together).

Earlier in the evening, when he was still talking to Lily Cole in front of a room of fashion types and scruffy journalists, Systrom seemed surprised by the fact that he helped create and now runs this huge photo-sharing juggernaut. He blinks when Cole mentions 150 million users, and emphasizes that “we are at their service. Every day we wake up and try to make it better for them. We may take care of this, but it has a life of its own.”

Equally, he seems a bit bemused about his own life.

“Did I expect this as a kid? Noooo. I think every passing day things get a little more surreal,” he said. “But i’m the luckiest guy in the world to be combining my passion for photography with a job that I get to go to, to work with some of the most talented people in technology who inspire me.” 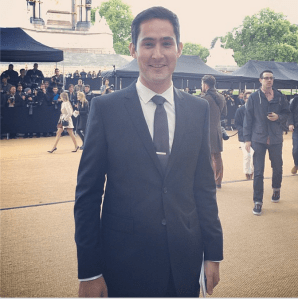 Systrom’s visit to Burberry S/S’14 was his first time at a fashion show, he said.

It may well have been fieldwork for him, taking in the scene and the companies that may someday become his paying advertisers (recall Bosworth). But in his recounting of the event, he focused elsewhere. Systrom described how there were “a lot of Instagrammers” covering the event (including someone from Burberry, as you can see from Burberry snap to the right here). Also, how Apple had teamed up with the label to shoot the show with iPhone 5s handsets ( that champagne gold color actually will go very well with a Burberry beige).

“There was a big tripod with a little tiny iPhone on the top,” he recalled, squeaking his voice on ‘tiny’. “I walked over and there was some unnamed celebrity sitting next to the camera. I took out my phone and they thought I was coming over to take a picture of them, but I took a picture of that iPhone. It was one of the most interesting things I’d ever seen. Forget about Instagram for a second. Social media and our devices are changing fashion.”