The new version of Apple’s mobile OS, iOS 7, is the biggest change since the icon-laden software arrived on the scene to disrupt the competition, all the way back in 2007. The risk for Apple now is that the OS redesign disrupts its own user-base, so here’s one sign of how Cupertino is managing the change: it’s updated the App Store to offer a prompt to iOS devices that aren’t compatible with the latest version/s of iOS enabling them to download the “last compatible version” of the app. The change was spotted by a Reddit user (via The Verge) who had tried installing Instagram on a 2nd-gen iPod Touch.

iOS 7 will be pushed out to the majority of iOS devices — becoming available for general download, beginning September 18 — but the iPhone 3GS won’t be able to get it, nor will the first-gen iPad. While the app compatibility prompt takes care of the owners of those older iOS devices, who would otherwise be getting left behind by the move to iOS 7, it’s also likely that this is about Apple making sure users of newer iOS devices who could upgrade if they wanted to but choose not to also aren’t left behind as developers rush to repaint their apps in iOS 7’s fluorescent colours.

In other words, if you don’t want to upgrade your iOS device because you like all the skeuomorphism then you won’t be penalised by Apple with a shrinking pool of apps to download — at least, not for now.

The “last compatible” app prompt may be about reassuring developers as much as users, though. While users aren’t being railroaded by Apple onto a version of iOS they may not feel ready for yet, developers get the reassurance that there won’t be a risk of their apps only reaching a sub-set of iOS users who are comfortable about upgrading to iOS 7 right away — giving them an incentive to work on iOS 7 app updates without worrying about whether their users are going to be there yet or not. (Albeit there may be more work required for developers to maintain older versions of their app, in addition to a big iOS 7 update).

I tested the compatibility prompt on an iPad mini running iOS 6.0.1 and got the below message when trying to download the Weatherbug app, which requires iOS 6.1: 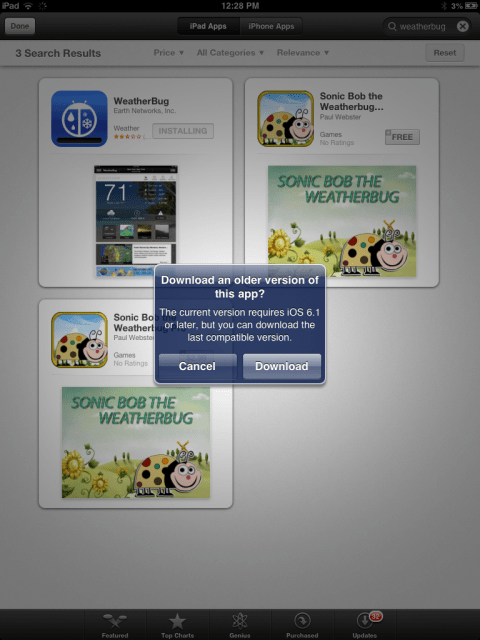