Cooking is set to get a whole lot smarter if connected kitchen device startup, The Orange Chef, pulls off its grand vision. Here at TechCrunch Disrupt SF’s hardware alley it’s showing off the Prep Pad: a Bluetooth kitchen scales plus app combo that’s due to land this November, costing $150.

The connected kitchen device startup has pretty humble beginnings in this space. Formerly known as Chef Sleeve, it manufactured plastic covers to protect iPads used in the kitchen to view recipes while cooking. From there it expanded to other culinary-related iPad accessories — such as iPad kitchen stands, and a chopping board with a built-in iPad slot. But those products were just its first phase. It’s now thinking a whole lot smarter by bringing connectivity and dedicated apps into its kitchen-focused mix.

If you’re getting a spot of deja vu, that’s because earlier this year at TechCrunch Disrupt NY, the startup discussed its plans for a connected scale as part of the next phase of its product portfolio. Four months later, here at Disrupt SF, it’s got the finished product on show. To get to this point it took to Kickstarter to help fund manufacturing costs, raising close to $50,000.

The Prep Pad consists of an aluminium frame topped off with a paper composite surface that can be hygienically wiped down, plus the electronic guts (weight sensor with +/-1gram accuracy, microcontroller and Bluetooth LE connectivity). It’s actually making the device itself, not just the software, here in Silicon Valley. “We’re bringing back consumer electronics to Silicon Valley,” says founder Santiago Merea.

“That gave us an edge and we could develop it in record time,” he adds. “We did our Kickstarter campaign [back in May]. We started developing the product… We actually did it in six months — the software and everything.”

The basic idea of the Prep Pad is to give people more control over their eating habits by visualising the nutrition content of foodstuffs in real-time, allowing the user to adjust ingredients to achieve a more healthy balance. It uses Bluetooth to send weight data to the corresponding app (called Countertop), and then turns that data into a visual nutritional pie. 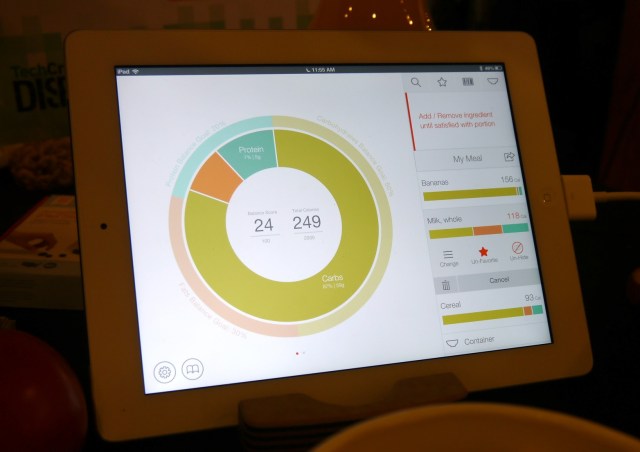 The user specifies what foodstuff/liquid they are weighing in the app, either by manually selecting it within the app, or scanning a product barcode, or there’s also a voice-capture feature. The app then builds a visualisation of how balanced that particular combination of meal ingredients is. It’s a gadget that looks perfectly positioned to capitalise on the quantified health trend, complementing activity-focused devices like the FitBit and Jawbone UP.

In addition to a visual pie displaying protein, carbs and fats, Countertop displays a balance score (out of 100), plus the total calories per meal count. The balance score is customised to each user, depending on the answers they give to a series of questions during the app set-up process about their exercise level and health goals, such as whether they need to gain or lose weight.

The app lets users hide particular ingredients, so they can see how each ingredient affects the overall nutritional mix of the meal they are making. There’s also a recipe cards feature (below right) that allows users to save a series of ingredients and share those as a recipe with others. 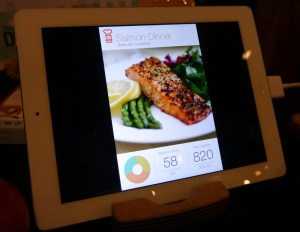 The Prep Pad is just the beginning of phase two for the company. Under its new moniker, The Orange Chef is gearing up to launch a whole range of connected kitchen items — with its next product after the scales likely to be a smart “visual” thermometer that will tell the user whether their steak is cooked, for instance, rather than just providing basic temperature data.

“We’re not going to tell you the temperature, because no one cares about that,” says Merea. “In the same way that we don’t show weight here [on the main Countertop app view]… Weight is not part of the equation at all — it’s in the background. We went even further. That’s the design that we have — we hide weight, we hide temperature.

“So we’re not going to show you the thermometer temperature, we’re going to show you visually if your steak is done or not, because that’s what you are about. And then how do you like it — so it’s going to learn from you.”

Beyond that? “We’ll continue connecting the kitchen,” Merea adds. “Every accessory that you can think of in the kitchen we’re going to make it smart. That’s our plan. To make a very smart kitchen that works all together. And not only that connects it, it is not just a connection, it’s how can we leverage this technology to make it better, to make the cooking better, to make it easier, to make it fun.”

The Prep Pad is now available for pre-order on The Orange Chef website.