World, prepare yourself for the next-generation iPhone.

Rumors this season have included two new color flavors — gold and silver — along with the addition of a fingerprint scanner for added security. As is standard with Apple iterations, we’ve also been expecting a processor bump and even a camera upgrade.

Did all the rumors come true?

The announcement event has been underway for long enough without a mention of the iPhone, so let’s not waste any more time.

Apple has confirmed the iPhone 5s will come in a gold version as well as grey (black) and silver.

Many have considered the gold iPhone, particularly, as a very non-Apple move, but as MG explains, gold actually makes sense for the smartphone titan.

For one, gold is in right now, seen as glamorous after years of being considered gaudy. Plus, anodizing gold onto the iPhone would be far easier than anodizing the slate color used on the black iPhone 5. And beyond that, gold seems to be one of the most used colors in iPhone cases and after-purchase customization. Give the people what they want, right?

The iPhone 5s certainly doesn’t look all that different from the iPhone 5. It has the two-tone back panel, albeit in new colors, and the same slim design we’ve seen before. However, the home button has changed a bit. There’s no rounded square icon in the middle of the button, but rather a ring around it. 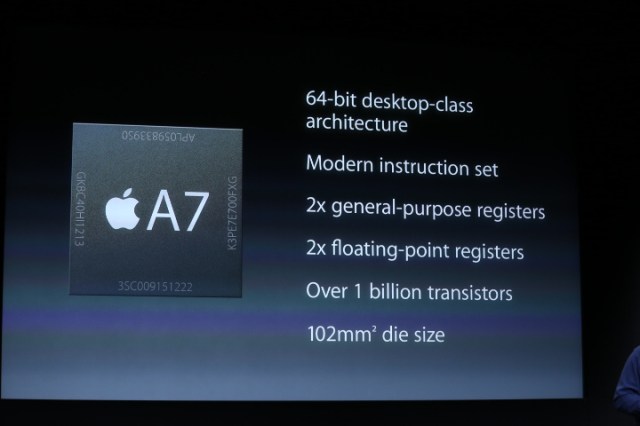 The iPhone 5s is almost entirely redesigned on the inside, with the most notable change coming in the form of a new A7 processor. The A7 Apple-built ARM CPU will have a native 64-bit kernel, libraries and drivers. The tech specs seem quite impressive: 2x general purpose registers, 2x floating point registers, over 1 billion transistors and 100 square mm die size.

In fact, it has twice the transistors as the A6 at roughly the same size. Still, the processor will run 32-bit and 64-bit apps.

According to Apple, the processor is more than twice as fast as the A6, with a 40x CPU performance bump. Graphics are said to be 56x faster.

The phone also has a brand new part called the M7, which is a motion sensor. It works alongside the A7 to continuously monitor motion from the gyroscope, accelerometer, and compass. This is meant to usher in a new generation of health and fitness apps, notes Phil Schiller, who mentioned that Nike would be building a new app leveraging this new architecture.

There’s a new part called M7, that works alongside the A7. It’s a motion co-processor.

Though Apple didn’t mention a battery size upgrade, they did note that the A7 processor will harness battery power better. Over 3G, you’ll have 10 hours of talk time. The battery/processor mix will also offer 10 hours of LTE browsing, as well as 250 hours of standby and 40 hours of music playback.

The new iPhone’s camera has been seriously upgraded, going from an 8-megapixel shooter in the iPhone 5 to a 15 percent larger active sensor area, with a five-element Apple-designed lens with f/2.2 aperture. According to Schiller, it also does autofocus matrix metering.

They seem to be skirting the actual megapixel count for the sensor.

When you take a photo, the camera takes multiple photos and picks the sharpest one for your viewing pleasure.

Beyond that, there’s a new flash called True Tone, with dual-LED. This is meant to take that whitish, blue tint out of photos taken with flash. One of the LEDs is the normal cool white and the other is a warm amber. The iPhone can combine them in over 1,000 ways to match the room and the skin tone, offering the best possible picture even in low light.

The camera will also offer image stabilization as well as a new 10-shot burst mode — the iPhone will automatically choose the best photo from the series.

And if that wasn’t enough, the new camera will offer a slow-motion option, shooting at 720p and 120 frames per second. Users can go in and select the parts of the video they’d like in SloMo and which they’d keep normal. 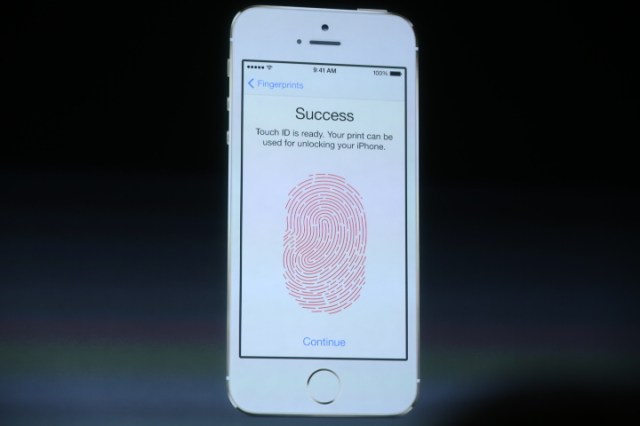 Apple has also announced that the new iPhone will be equipped with a fingerprint scanner, something we’ve expected ever since the iOS 7 beta four hinted at it. This is meant to provide an extra layer of security to the iPhone, which should usher in a more ubiquitous mobile payments system as foreshadowed by iOS 6’s Passbook.

According to Apple, half of users don’t set up a passcode on their device. To combat this, the company has built the fingerprint scanner directly into the home button. It’s called TouchID.

The sensor is 170 microns thin, 500 ppi resolution, has 360-degree readability, and scans sub-epidermal skin layers. It also has a stainless steel detection ring so it can sense when your finger is actually on the button, meaning you’ll never actually press a home button again. The Home button is now sapphire to prevent scratching.

In essence, the TouchID scanner is taking a high resolution picture of your fingerprint to analyze, but those rightfully paranoid about privacy and security shouldn’t worry. These images are never stored on iCloud or Apple servers.

The iPhone 5s price hasn’t changed from past generations, with on-contract 16GB models starting at $200.

It seems as though there is no pre-order for the iPhone 5s, but in-store availability starts on September 20.

This post is being updated as more information is released. Please refresh for updates.