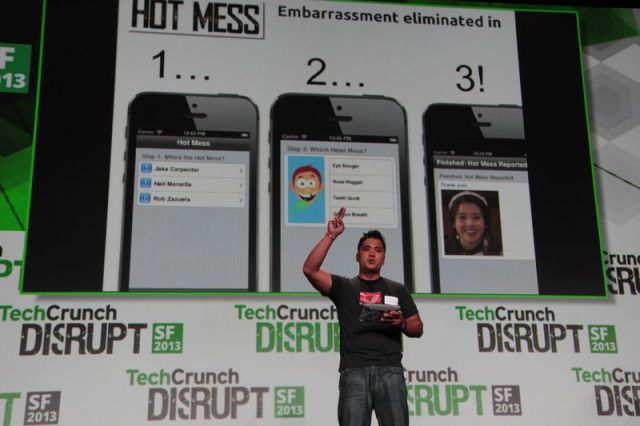 Neil Mansilla and Rob Zazueta got a lot of laughs this afternoon for their Disrupt Hackathon submission, Hot Mess. The app aims to solve the universal nightmare of unwittingly walking around with a piece of crud in your teeth by allowing people to send anonymous texts alerting you to the situation.

Users can choose from a variety of common scenarios, like “eye boogers”, “nose nuggets”, “teeth gunk”, and “dragon breath”. (Their phrasing.) Hot Mess sends a discreet text message letting a person know that “An angel has sent you a hint” and that they should read it in a private place. The text includes a link to a description of the problem accompanied by a very flattering photo of Zazueta demonstrating the issue.

Zazueta clarified that he created the images using gum for nose goop, Red Vines for tooth gunk, and cake as an eye booger. 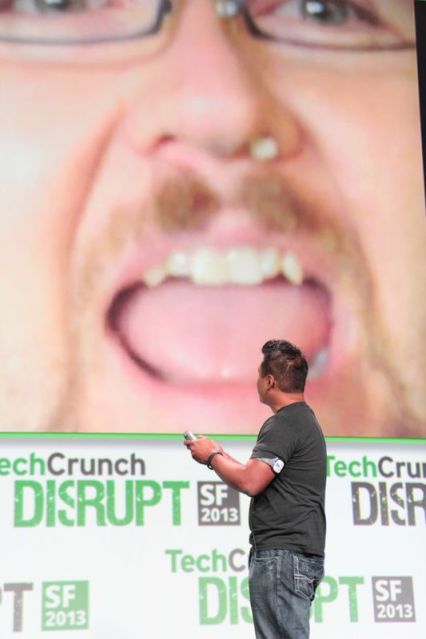 Importantly, all messages and images are pre-programmed so that users can’t use it to bully others and keep Hot Mess helpful and positive. The presentation got the audience laughing — who hasn’t walked around with their fly unzipped at some point? — but as the team explained, the hack is meant to serve a broader social purpose.

“This is intended to break a social taboo,” Mansilla said backstage. “If someone is a close talker and has halitosis, or is too loud, it’s hard to share that without offending them. Why? You’re doing them a disservice by not telling them.”

The goal is that apps like Hot Mess will make themselves obsolete by creating a social climate in which people are happy to tell each other to go blow their nose.

The app would be particularly useful in professional situations, Zazueta and Mansilla said, where looking like a slob seriously affects people’s perception of you and co-workers might not feel comfortable making a comment.

“The giver gets good karma and the recipient won’t feel bad because they think the intent is genuine. I think everyone can completely relate to this, which is why it was funny.”

Mansilla and Zazueta said that they were interested in building other verticals for Hot Mess, like sending a message to someone in a bar when they’re hitting on someone too hard or need to talk less. Another potential feature is time delay between sending and receiving the message, which would help protect the sender’s anonymity and could be especially helpful for chronic problems that don’t require a quick fix.

It’s like on the subway. If you see something, say something.