Among the more recent changes afoot at Twitter, the company recently announced that it would no longer allow third parties to use Twitter’s API for bulk-following or unfollowing Twitter accounts — spammy behavior, by many estimates. Now, a developer who has built a product based on this feature is crying foul, saying that his application, called ManageFlitter, is not spammy, but an example of the kinds of marketing services that Twitter has been encouraging on its platform.

The situation is reminiscent of how other apps have fallen at the Twitter API hurdle when it’s turned out to be too tricky to change to meet new rules. With these changes aimed specifically at doing away with spammers, this time around, the developer is claiming that he’s actually one of the good guys who has just fallen through the cracks.

Ironically, this is not the first time the ManageFlitter has fallen afoul of Twitter policy. The same thing happened to it over three years ago, when it was called ManageTwitter. Back then, it found a workaround.

For those of you who are not familiar with the service, ManageFlitter is an enterprise-style app that helps brands, high-profile people, and Twitter power users build their lists of followers and then offer analytics services to tweet to them more effectively. In addition to bulk following and unfollowing, which are the core features of the service, customers can also figure out when people are most active and therefore the best time to send tweets to them. 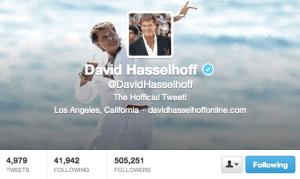 It’s approaching 2 million customers at the moment, some taking its free service, and some paying for its Business ($49 and up/month) and Pro ($12 and up/month) tiers. ManageFlitter has a bunch of high profile clients including AOL (TC’s owner), PayPal, GE, Microsoft, American Express, Richard Branson, UK Prime Minister David Cameron and (my personal favorite) David Hasselhoff.

Kevin Garber, the Sydney, Australia-based co-founder and CEO of ManageFlitter, tells us that on July 19, soon after Twitter updated its guidelines on automated tweets, it contacted his company to say that it was in violation of those guidelines, which note, “You may not use or develop any service that allows for the following or unfollowing of user accounts in a bulk or automated manner. Accounts and applications that engage in this practice will be suspended.”

The feature in question covers actions like Unfollow. “ManageFlitter’s Unfollow tool is super quick and full of helpful features. Work with 1000s of accounts in seconds,” is how the company enthusiastically describes it. “This tool will immediately show you the people who you’ve followed who don’t follow you back, are inactive, have no profile image and much more. Sort by a range of criteria including influence, date of follow and many more attributes.”

Twitter’s July warning gave ManageFlitter two months to change the functionality or drop the API usage altogether. And now that the deadline is fast approaching, ManageFlitter is scrambling to see if it can figure out a way to cooperate with Twitter to work around the restriction. So far, its attempts to do so have fallen on deaf ears.

“We tried to contact someone at Twitter to understand their reasoning behind the policy changes,” Garber explained to me, but he says they were told, effectively, “‘It’s not our policy to meet with folks who have run into issues with our platform policies. For that reason, you won’t hear back from anyone in the platform team.'”

For now, that means the startup won’t be doing what IFTTT did to create a workaround. “IFTTT are based in San Francisco and may have better / pre existing relationships with them that unfortunately we don’t have and are struggling to establish,” Garber told me. Also, the issues are different, in that IFTTT’s problems had to do with limits on tokens, and ManageFlitter’s are do with breaching a new bulk follow policy. Also, it’s taken nearly a year for IFTTT for Twitter triggers to return to IFTTT.

Meanwhile, ManageFlitter has also taken to the Town Square itself to try to make some headway, appealing to CEO Dick Costolo for more of an explanation. He’s pretty clear on his position. “No bulk following, period…Bulk following is unwanted behavior. That’s why,” Costolo replied in a short series of tweets. (You can read the full exchange here, which is much heavier on Garber and others asking for more information than Costolo answering.)

ManageFlitter says that it sees itself as a “white hat” bulk-follower service, in that it is actually trying to promote the same kind of behavior that Twitter is encouraging.

“ManageFlitter has always stood firmly in the “white hat” space which involves using the official APIs, following Twitter’s Rules and Best Practices and discouraging aggressive and non-organic social graph activity. Furthermore we have never offered any type of automated bulk following or unfollowing,” Garber writes in a blog post. Their position is that Twitter’s attempts to curb the growth of spam by forbidding sites like his are misguided, and that it should instead continue to improve spam detection algorithms. “We feel by Twitter limiting batch follow/unfollow options punishes the very Twitter users that Twitter is trying to protect,” he notes.

To be clear, there are a number of services designed for brands and other Twitter account holders to manage their followers better, and these are not shutting down, so perhaps going to the drawing board for ManageFlitter will be about rethinking entirely how it offers its service.

The scenario, however, is also one more indication of how third party developers, even longstanding ones, remain on precarious footing when they build services that are too dependent on a platform that itself is still fairly young and evolving as it, too, builds its business.

This can have a knock-on effect for those startups in how they grow in other ways. For example, VCs may end up being more reluctant to invest in services that are tied too much to other company’s platforms. And Garber says that he is expecting ManageFlitter revenue growth “may be negatively impacted in the short term once we remove batch follow/unfollow functionality.”

Ultimately, though, unless something drastically changes very soon, sometime between today (September 5) and September 9, ManageFlitter will be turning off the bulk follow feature in its service to comply with the orders and prevent its service from being blocked altogether. Initially, it will be issuing a new version that will only allow users to follow and unfollow other accounts one at a time. “We will also be rolling out some substantial new features at the same time to help soften the blow for our users,” Garber tells me.