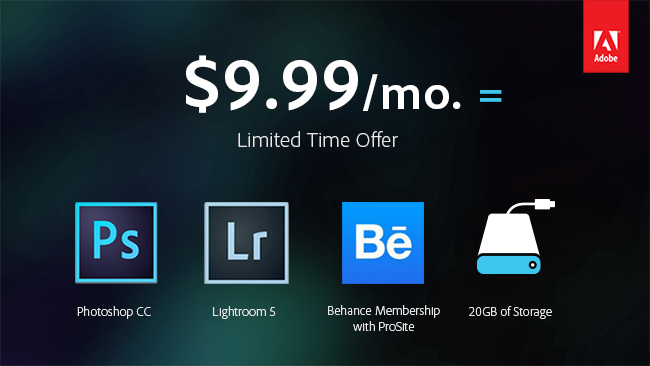 Adobe today announced its Photography Program, which for $9.99 per month offers photographers who own a previous copy of Photoshop (starting with CS3) access to a “lite” version of Creative Cloud with Photoshop CC and Lightroom 5, as well as a Behance membership with access to Adobe ProSite and 20GB of online storage.

Adobe notes that it’s making this offer based on the feedback it has received from “advanced professionals to casual enthusiasts.” Adobe’s Creative Cloud gives users access to virtually all of Adobe’s tools (starting at $49.99/month) and the company also offers $19.99/month subscriptions to individual apps. For photographers, who often only want access to Lightroom and Photoshop, there really wasn’t a compelling offer so far.

Adobe announced in May that it would fully switch to a subscription-based business model, which came as somewhat of a surprise to most pundits who assumed the company would take a more gradual approach to this switch. Since then, it’s been quickly adding new subscribers. In its June earnings report, the company said that it had 700,000 paid Creative Cloud subscribers, an increase of 221,000 since the end of the last quarter.