You don’t get to be an almost 150-year-old company, as Nokia is, without being good at reinvention. The Finnish company’s latest Houdini trick — announced late yesterday — is to exit smartphones by selling its Devices & Services business unit to Microsoft for $7.2 billion so it can focus on areas of its business that have not been brought low by the competition.

Make no mistake: there is no doubt that Nokia failed in smartphones. The missteps have been well documented — but the short version is they failed to move quickly enough, hanging onto their legacy Symbian OS for too long while newcomers Apple and Google’s Android pushed in and pulled the market away from them, with software built for touchscreens and slicker apps execution.

Arguably Nokia also failed by not adopting Android — and choosing to adopt Microsoft’s Windows Phone OS instead. Of course there is no guarantee that Android would have saved its Devices & Services business. Nokia as an Android OEM would certainly have faced a very tough competitor in Samsung. Plus the Android OEM game is becoming a business of diminishing returns as the price of device hardware continues to be squeezed — so ultimately, looking longer term, Android may only have been a stop-gap that bought Nokia a little time and money to fund its next shift.

Other alternatives — such as continuing to develop its own smartphone OS alternatives (like MeeGo) — were also high risk strategies since Nokia had allowed itself to fall so far behind the competition. The smartphone ecosystem is barely supporting more than a couple of OSes now: with Android massively dominant (on circa 80% global share), iOS taking less than a fifth, and Windows Phone picking up the crumbs. Since its shift to Windows Phone Nokia has shipped sub-20 million smartphones in total — a tiny drop in the ocean of Android devices now shipping globally.

“Rationally it is clear that the smartphone market is undergoing dynamic change… the industry is becoming a duopoly with the leaders building significant financial momentum not seen before,” Nokia’s interim CEO Risto Siilasma said today in its press call about the business unit sale.

“Nokia alone does not have the resources to fund the required acceleration across mobile phones and smartphones, especially as we have great opportunities in our other businesses as well.”

Jumping ship to those “other businesses” is not something that scares Nokia. The company has a long and varied history. Its business began as a paper mill in the 1860s, and moved on to making rubber boots, tyres and cables, before turning to electronics including building TVs and finally mobile phones — where it hit the jackpot for many years. 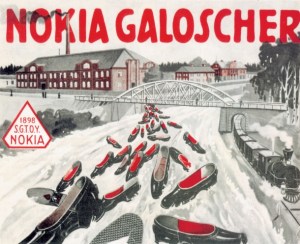 “Changing with the times, disrupting the status quo – it’s what we’ve always done. And we fully intend to keep doing it,” runs the line on the company history page. That’s a little too rose-tinted for the reality of Nokia’s current situation — they were the disrupted in smartphones, not the disruptor — but the point stands: Nokia is good at reinventing itself, at carving out an exit strategy when an exit is required — and that’s exactly what exchanging its Devices & Services business for $7.2 billion cash is all about today.

“Today marks a day of reinvention for Nokia. With our strong corporate identity and new financial strength the Nokia team will build our next chapter, this is the beginning of the next 150 years of the Nokia story,” said Siilasma. (Albeit he conceded that while the decision to exit phone-making  makes “rational” sense for Nokia’s business, it is “more emotionally complex” for a company that had become so synonymous with phones, at home and abroad.)

Take Devices & Services out of the equation and Nokia becomes a company with €13-€14 billion in annual revenue, a workforce of 56,000 and considerably more cash in the bank, thanks to Microsoft’s pay off. Redmond also becomes a customer of Nokia’s HERE business, licensing the HERE services that are used in Nokia devices.

The sale will “significantly strengthen” Nokia’s financial position (thanks to the $7.2 billion cash injection) and is “clearly accretive to earnings” (as Microsoft becomes a HERE licensee, and adds some 32,000 Nokia employees to its payroll), was how Nokia’s CFO put it on today’s press call.

So what’s next for Nokia?

So what does the future hold for a post-mobile-phones-making Nokia? It’s not straying very far from phones. Nokia sees its next business chapter in a mix of software services and specialist hardware with mobile connectivity as the shared theme.

The business units (and brands) it’s choosing to focus on are its NSN networking infrastructure business unit; its HERE location services business; and a new division it calls ‘Advanced Technologies’ — which it said today will span “connectivity, sensing and materials, web and cloud technologies” and also include its IP/patents portfolio.

In its new Advanced Technologies business division I would expect to see Nokia pushing its R&D in areas such as nano technology and graphene — perhaps to build flexible displays/devices for a new generation of mobile devices. These are areas Nokia’s R&D labs have been dabbling in already — specifically graphene is something its Cambridge lab has been working on. Nokia is also a backer of a Cambridge University graphene R&D centre. And has been showing off flexible phone prototypes for years.

A Nokia spokesman confirmed the focus when asked by TechCrunch, telling me: “We would expect activities like [graphene and nano technology] to be at the core of what Advanced Technologies would be.”  The spokesman added that licensing technologies to others would be “one business opportunity” but said Nokia could also look to build “new products we could bring to market ourselves or work with a partner to do so”.

“Some of the things that have come out of this organisation in the past have been foundational work on graphics and video encoding technologies such as the H264 standard, work on low powered Bluetooth… part of the Bluetooth LE standard and some of the imaging technologies that are used in augmented reality apps such as the HERE LiveSight app,” he added.

For the NSN networking business unit, Siilasma said the focus will be on advanced LTE and 5G — aka the next generations of mobile broadband. There’s no stopping the march of mobile connectivity, which gives that business unit plenty of road ahead. Currently, he said NSN has more than 600 customers in 120+ countries, serving 2.5 billion subscribers.

And then there’s HERE: aka the mapping and location-based services that are becoming increasingly important to mobile. As computing shifts from fixed desks to the device in a pocket, real-time location data is arguably where the value in mobile is relocating to too.  You can see this logic in Google’s purchase of Waze, and the effort Apple is now putting in to put its own mapping house in order (including some recent smaller acquisitions).

Nokia’s $8.1 billion acquisition of Navteq in 2007 foresaw that shift — and it’s somewhat ironic that today’s price-tag on its entire Devices & Services business is less than what it paid for Navteq. But it is also fitting when you consider that mobile hardware is being commoditised, and the value in mobile is switching to software services.

That said, who’s to say phones will always be so similarly, boringly slab-shaped? A flexible, transparent phone, for instance, would rightly command a price premium, were such a device to hit the market. And that’s the sort of device that could end up coming out of Nokia’s Advanced Technologies business unit, down the road.

And while Nokia won’t be able to sell phones itself in the short term, after the Devices & Services transaction closes (as Microsoft will own that part of its business), it will be able to do so from 2016 onwards, as noted in its press release:  “Upon the closing of the transaction, Nokia would be restricted from licensing the Nokia brand for use in connection with mobile device sales for 30 months and from using the Nokia brand on Nokia’s own mobile devices until December 31, 2015.”

So even if Nokia is getting out of the phone making game right now, it’s not closing the door on being able to make its own brand devices in future — assuming the time is right, and the devices themselves are different enough to disrupt the status quo, as Nokia’s phones were themselves disrupted.

Ultimately, though, expect Nokia to do whatever it takes to keep its own corporate wheels turning.