“We’re not building a Marxist society,” jokes Burning Man Founder Larry Harvey in response to a series of recent stories detailing the annual festival’s multi-million-dollar balance sheet and its buddy-buddy relationship with Silicon Valley billionaires. More seriously, he says, “you can make a lot of money and do good with it. Elon Musk has made a lot of money.”

Musk and his elite brethren have become part of the changing face of the week-long rave fest in the Nevada desert, known for its principle of “radical inclusion” and the tens of thousands of Bohemians who load up broken campers to let their inner free-spirit out during a retreat from the button-down corporate world.

Mark Zuckerberg reportedly helicoptered in to hand out grilled cheese. Larry Page, who was spotted one year donning a skin-tight silver onesie, said he hired Chairman Eric Schmidt, in part, because he was a Burner alum. Musk reportedly first dreamed up the solar-powered project that would eventually become his idea for the super-fast transit system, Hyperloop, on a road trip to Burning Man in 2004. 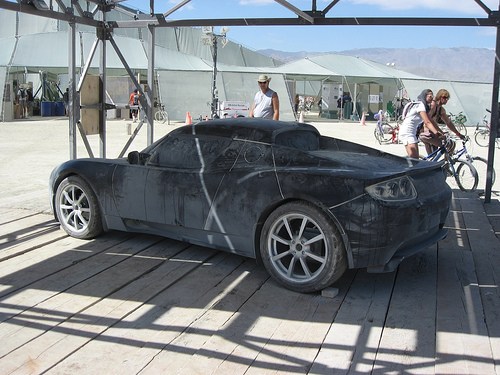 In recent years, Burning Man ticket prices have soared and Silicon Valley-themed camps are awarded with sizable real-estate on the desert campus. So what does an art and music festival –- made famous for its drug-fueled, 24-hour mobile dance clubs and its elaborately dressed half-naked artists — want with millions of dollars and the tech elite?

I sat down with Harvey on the last day of Burning Man, surrounded by the hymn of de-toxing party monsters deconstructing their themed camps with fork lifts, to find out. 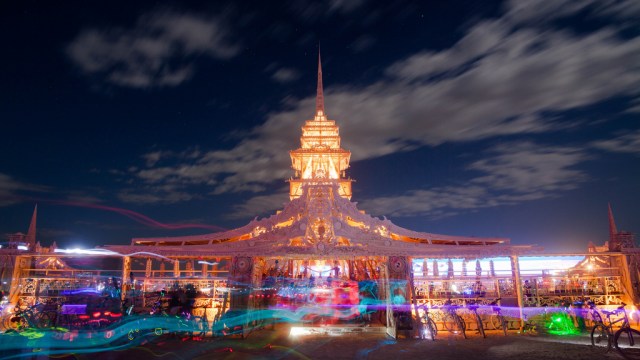 “The opportunities of all these folks coming out who have command of wealth is to help us in extending our culture throughout the world,” explains Harvey. “A typical pattern is that they might stay for a day or two, and then it dawns on them that there’s a manifold of profound things to be gained.” Harvey and Google execs are known to wax philosophical over dinner at his personal camp.

As sappy as Harvey’s perception sounds, the experience evidently inspires tech founders’ affinity for radical experimentation. “Maybe we can set aside part of the world,” Google CEO Larry Page recently mused. “I like going to Burning Man. As a technologist maybe we need some safe places where we can try things and not have to deploy to the entire world.”

To that end, Harvey’s friends in the tech community are heeding his call to expand Burning Man-like villages around the world. Zappos CEO Tony Hsieh is setting up a satellite burner installation within his project in Downtown Las Vegas, aimed at creating a model for city innovation.

Hsieh has spent a portion of his personal $350 million investment on a tight-knit community of startups that feed off of one another’s idealism and experimental creativity. The otherwise run-down outskirt for low-budget Las Vegas tourism is starting to resemble the Burning Man campus, with monster-size art sculptures and retail shops in shipping containers.

Burning Man has come under criticism for the fully catered luxury camps that greet wealthier participants. I was granted an inside look at one of these so-called “turnkey” camps this year; other than fancy dining, the experience seemed pretty typical: bike around the campus during the day, meditate on a personal struggle, then rage all night.

It is true, however, that few high-end participants have time to create the elaborate art structures that they themselves enjoy. “It’s okay if they don’t drive an art car,” says Harvey. Although, apparently, the experience does compel some to give generously. Harvey admitted that one of the Google executives donated hundreds of free bikes to the festival. 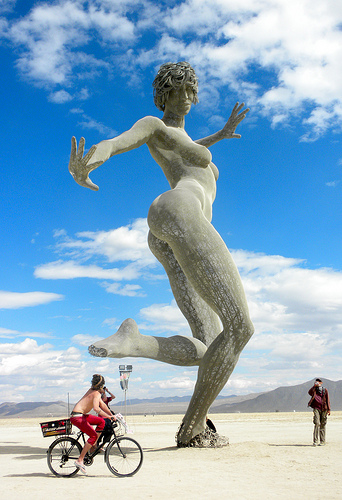 Burning Man’s ban on selling anything (except for ice) has created the misperception that the festival is anti-capitalist. Burners persist on a gift economy, where food, services and labor are generously doled out. Unlike a barter economy, immediate reciprocation is actively discouraged.

Half-naked attendees who solicit attendees to stop by for a gratis drink and body paint don’t have to think twice about freely enjoying one of the elaborately constructed group showers/dance clubs (yes, you read that right).

But, Harvey insists that Burning Man was never anti-money. “Anything much more ambitious than a family picnic would require that you responsibly deal with money.” Instead, the millions in revenue that goes to infrastructure and payouts to the local authorities are meant to conceal the complexities of money from participants, so they can concentrate on uninhibited experimentation.

“We just create things and give people time to pursue their own projects, and we don’t ever think about monetization.”

His unorthodox business philosophy finds a home in the tech industry’s risky reliance on free services, largely built from the contributions of users. For instance, Google Engineer Michael Favor, who piloted an early version of Google Maps 3D walk-thru at Burning Man, explained, “The power of Google is that they don’t do all the work. People posting content do. The same is true here at Burning Man. Citizens create the vast majority of things.” [PDF]

To be sure, Harvey is no fan of laissez-faire capitalism. “[Burning Man has] always been a sustained critique of the commodification of society and culture, that it isolates people from one another in their role as consumers.” As a counter example, he argues that crowdfunded artwork through sites like Kickstarter is a way to build community and make money at the same time. “Even before an artwork gets here, hundreds of people have contributed to it and identified with it.”

Intentional or not, however, Burning Man’s lucrative potential has brought with it entrepreneurs looking for inspiration and generous venture capitalists, which Harvey insists represent at most “a distinct minority” of the festival’s temporary population of nearly 70,000.

I scanned the dust storms looking for opportunistic tech people but came up empty-handed. During my visit to the massive “Silicon Village” multi-camp site, all I found was techies heads-down in rather unusual projects. One veteran Bay Area engineer proudly showed off his automatic water mister and “Orgasm Yurt” (a female-only joystick-shaped personal massager, tucked away inside a foil Yurt, complete with shag bedding).

If semi-wealthy tech carpetbaggers had crowded out Burning Man’s usual fare, I couldn’t find them.

For those of us steeped in the unbridled utopianism of Silicon Valley, Harvey’s philosophy is no shocker. So long as capitalism is centered on innovation, the philosophy goes, money does not exclude social good. With this rather idealistic underpinning, billionaire friends and a cash-cow event series are necessary to spread a cultural vision.

Regardless, the festival’s impact has made friends in high tech places. And to the extent that Burning Man culture seeps into technology’s influence in our lives, expect our world to get a little more…exciting.