With an ever-expanding selection of apps on the market making educational claims, parents today have a tough time deciding which apps are worth their investment. Earlier this year, app search and discovery portal Appolicious launched a new resource called appoLearning to specifically address this problem. Today, that service has arrived on the iPad in the form of a standalone application.

Even Apple has now realized that kids’ apps need more attention, as the iPad moves further into schools and becomes known as an educational tool for children. With the forthcoming arrival of iOS 7, Apple is taking its own steps to address the iPad’s new role in education by launching a “Kids” category in the Apple App Store to help developers sell apps targeting children 11 years old and younger. But Apple’s “Kids” section, while useful to some extent, so far is only breaking down apps into one of a few age ranges. If anything, the separation of this content is more about setting controls that prohibit developers from collecting personal info like email addresses without parents’ consent, or targeting kids with behavioral ads, among other things.

AppoLearning goes much further into surfacing the best educational applications. On this service, apps are reviewed across some 165 categories, including subjects like “reading,” “number sense,” “life science,” “social interaction,” “speaking and listening,” and more, while also grouped into stages like “Early Childhood” (ages 2 1/2 – 5), “Elementary School,” “Middle School,” and “High School.” 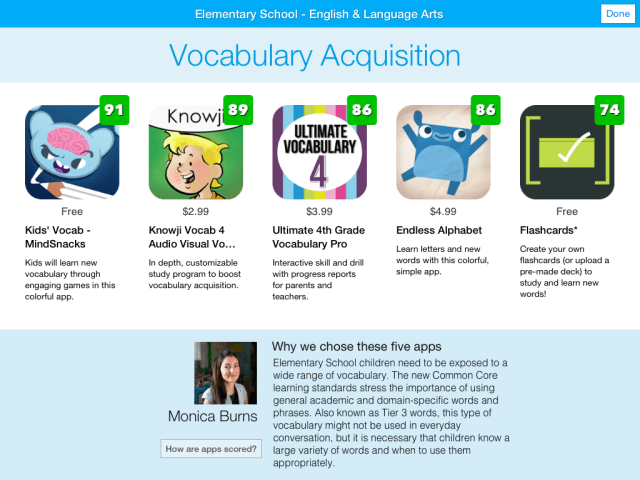 More importantly, appoLearning isn’t just rearranging the App Store for ease-of-use by parents and teachers, it’s about making recommendations as to what apps end users should actually buy – that is, which have real, educational value.

To determine this, appoLearning works with a team of 65 educator experts – up from just 25 at launch in April – who review the apps across a standardized ratings system designed by Appolicious as a tool to normalize the app ratings and review process. The experts today are curating around three categories apiece, writing over 2,000 words of text, and creating around 45 pieces of discrete data to accompany the reviews – metadata that will later prove useful in terms of appoLearning’s plans to launch an advanced app search service.

The end result is a “top 5” selection of the very best apps across all of Apple’s store for any combination of subject matter and grade level (e.g. Elementary School + History, High School + Geometry, etc.)

This deep dive into the educational side of the Apple App Store for iPad has so far gained traction with a subset of users. While to date, the web version of appoLearning has seen “hundreds of thousands” of visitors, according to Appolicious founder Alan Warms, the promising metric is the conversions: around 11 percent of all website visits prompted an app download. 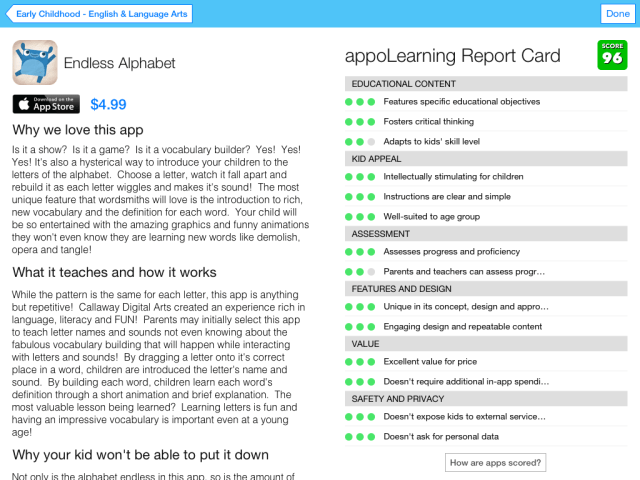 However, Warms said that the number one request from the service’s early adopters was to transform the site into an iPad application. Today, the company has down just that. In addition, the earlier business model involving paid app placements next to the experts’ recommendations has been scrapped. Instead, all roads now point to iPad. Web visitors can browse five pages for free, but then must download the iPad application to continue.

The iPad app is $4.99 – a price point which is just high enough to potentially push away those with only casual interest. But this, interestingly, is by design. “We’re okay with charging for the app because there are some people who will just never pay for an app,” says Warms. “Those folks are not the people who will be buying the best educational apps, either.” That’s probably true – all across appoLearning (and from personal and anecdotal experience, too) – the highest-quality educational applications are those you purchase, not the freebies. appoLearning targets a market that understands that truth, though Warms is a bit incredulous that more people don’t feel this same way.

“The biggest absurdity out there right now is that people are willing to drop three to four bucks for a latte at Starbucks, but there’s a huge swath of people who a) don’t want to pay for apps and b) get all bent out of shape about spending two or three dollars for an app. We think that’s crazy,” he says. “We’re trying to give parents the confidence they need to pay two or three dollars for an app,” Warms adds.

Going forward, appoLearning will focus on doing the same for iPhone applications, and developing other features to improve the experience, including the above-mentioned app search option, and plans to let end users curate their own app lists. The iPhone version is expected by early next year at the latest, but an Android version is not yet in the works given what the company has found to be a lack of quality educational apps and limited tablet market share for that platform.

The new appoLearning app for iPad is available for download here.