Target’s answer to Walmart’s Vudu, Netflix, and iTunes, is preparing to launch. Employees at the Minneapolis-headquartered retailer were told this week that Target Ticket, as the service is called, will soon be offered to consumers, allowing them to rent and purchase digital copies of movies and television shows like they do on Apple’s iTunes, then play them back across all the devices they own, including smartphones, tablets, TVs, Blu-ray players, and game consoles.

Details surrounding Target Ticket were first revealed earlier this year, when word got out that the concept was in testing with employees. At the time, the beta website appeared, saying that Target Ticket would offer users instant access to 15,000 titles, including new releases, classics, and TV shows. The company then would only say that the service was in a trial period that would help it gather data to help inform its future plans.

However, Target Ticket doesn’t offer a comparable alternative to iTunes’ “Season Pass,” as you can’t purchase a TV season until after it has aired. 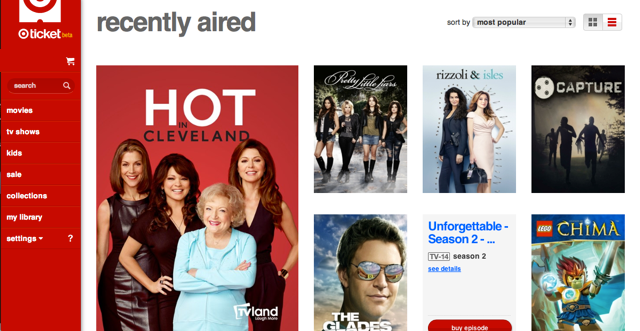 The TV shows and movies can run nearly anywhere, including on iOS and Android smartphones and tablets, as well as on streaming players, TVs and gaming consoles like the Xbox 360. However, support for the service on TVs is currently limited by manufacturers. Employees were told that only Samsung TVs and Blu-ray players will work with Target Ticket during training, but now the site lists Samsung, Panasonic, LG, Philips and Funai brands as “coming soon” under compatible devices.

Unfortunately, Apple device owners will not have quite as smooth of an experience as those on other platforms, as it seems that they’ll have to first download the movie to their computer, then sync it to their devices manually. The iOS app itself only displays the movies you own, but doesn’t offer a purchasing option.

Beta applications for iOS (iPhone and iPad) and Android were published to the app stores earlier this year, but received a significant update this month. Currently, the app description says that Target Ticket is only for “team members and REDcard holders,” the latter presumably being beta testers. (It’s worth noting also that on iOS, the app says it can play back content already purchased on TargetTicket.com while the Android version says users can “stream or download movies and shows in your library.”)

After renting a movie, you have 30 days to start watching it, but after starting, you have 48 hours to finish viewing it. You can also watch it as many times as you want during that period. The 30-day window is similar to iTunes, but iTunes U.S. users only have 24 hours to watch their movie, while outside the U.S., it’s 48 hours.

The company is offering some movies available for purchase ahead of DVD releases, including Paramount’s “Star Trek: Into Darkness,” and more will be available in the future.

Movies have also been organized into collections for end users’ ease of access, like “End of World Movies” or “Marvel Movies,” for example. 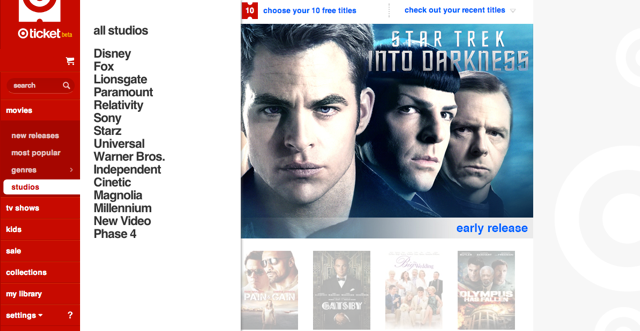 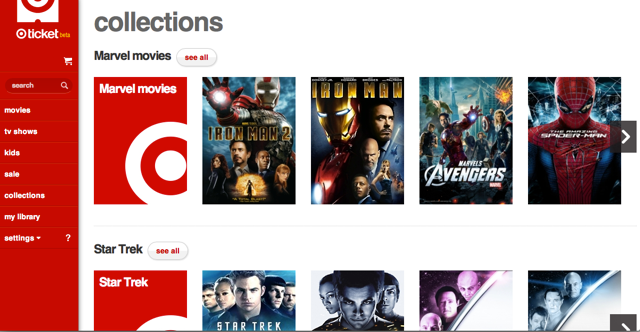 Internally, Target is positioning Target Ticket to employees as an alternative to Netflix and Hulu, as well as iTunes, but that’s not entirely accurate. Although some of the content may be the same, you don’t pay a monthly subscription fee for all-you-can-eat access on Target Ticket, but rather pay for individual rentals and purchases.

While the pricing is competitive with iTunes, Target will be incentivizing its customers to choose its service by tying it to the company’s REDcard discount program. Target REDcard holders will see their same 5 percent in-store discount applied to rentals and purchases made in Target Ticket just like they would on Target.com, and employees can also use their 10 percent discount here. 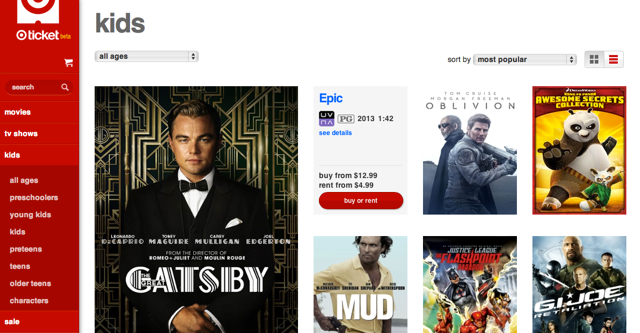 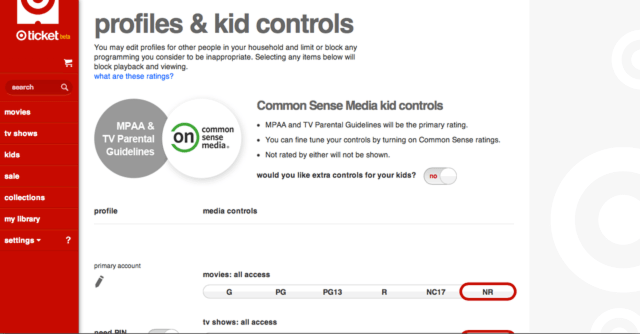 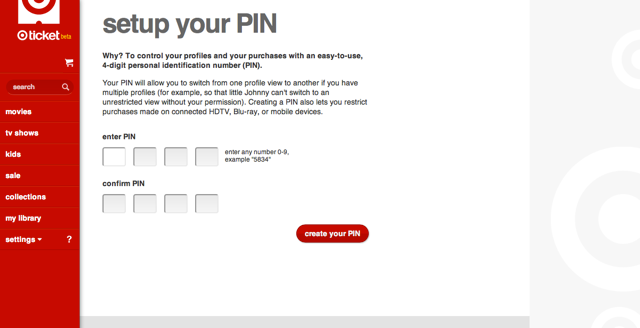 Another aspect to Target Ticket which Target is asking employees to tout are the parental controls. Parents can create profiles, and then limit access not only by MPAA and TV Parental Guidelines, but also optionally by Common Sense Media more fine-grained controls. That’s a step up from the profiles and controls Netflix recently introduced, as Common Sense Media ratings include both an age-appropriateness score and overall quality rating that help parents choose not just “safe” content but also “worthy” content.

The retailer has been busying itself with digital initiatives this year, having recently launched a Facebook-enabled digital savings program and mobile app called Cartwheel, which now has over a million members, for example. But in terms of competing on the digital movie landscape, Target is late to the party. Walmart, as noted above, already offers Vudu, while Toys R Us launched its own family-friendly movie service last fall with some 4,000 titles. Walmart encourages users to sign up to Vudu by offering 10 free movies, and Target Ticket, apparently, will do the same.

Target declined to comment on these specific details, saying again that it’s just testing the service with team members. Of course, the Target Ticket app store description already indicates that the service is opening to REDcard holders. On the main website, non-employee testers will be able to enter a promo code to sign up ahead of the broader public launch. Employees have now been trained on the service and how to pitch it to customers, but have not yet been given the go live date. 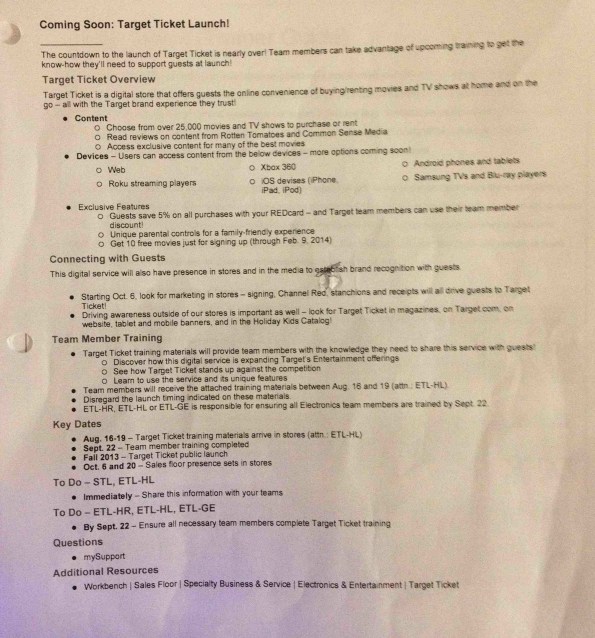 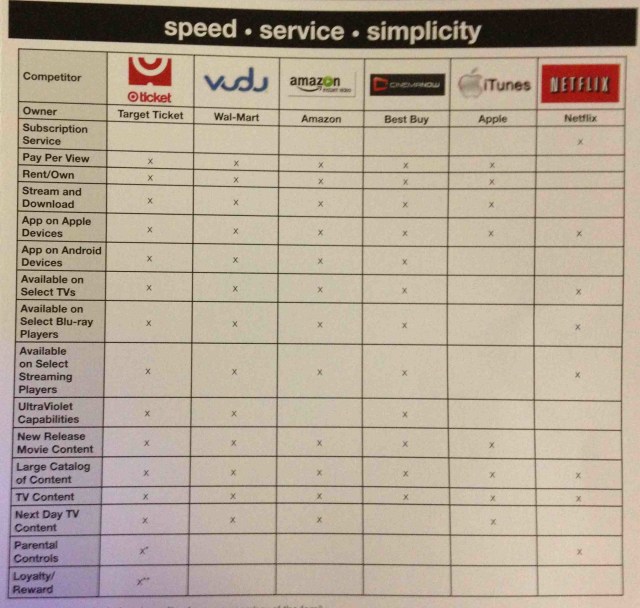