If you’re unfamiliar with Unity, here are the basics: You build your game in Unity’s editor, and can then publish it to many, many platforms with minimal modification. It currently supports iPhone, Android, BlackBerry 10, Windows/Windows Phone, OS X, Linux, their browser-based web player, and all of the current/next-gen consoles (though you’d still need to work with each console maker for the rights to publish on those).

Now, the news that Unity will officially support 2D game development doesn’t mean that you couldn’t build 2D games with Unity before. You could! Rovio’s Angry Birds sequel Bad Piggies was built on Unity, for example.

It’s just always been a bit of a hacked-together process. You had to lock the camera to one plane, force perspective, and install a bunch of third-party extensions for 2D art management… and even then, it always felt like you were forcing a 2D game into a 3D game engine. You were almost working against Unity as much as you were working with it. 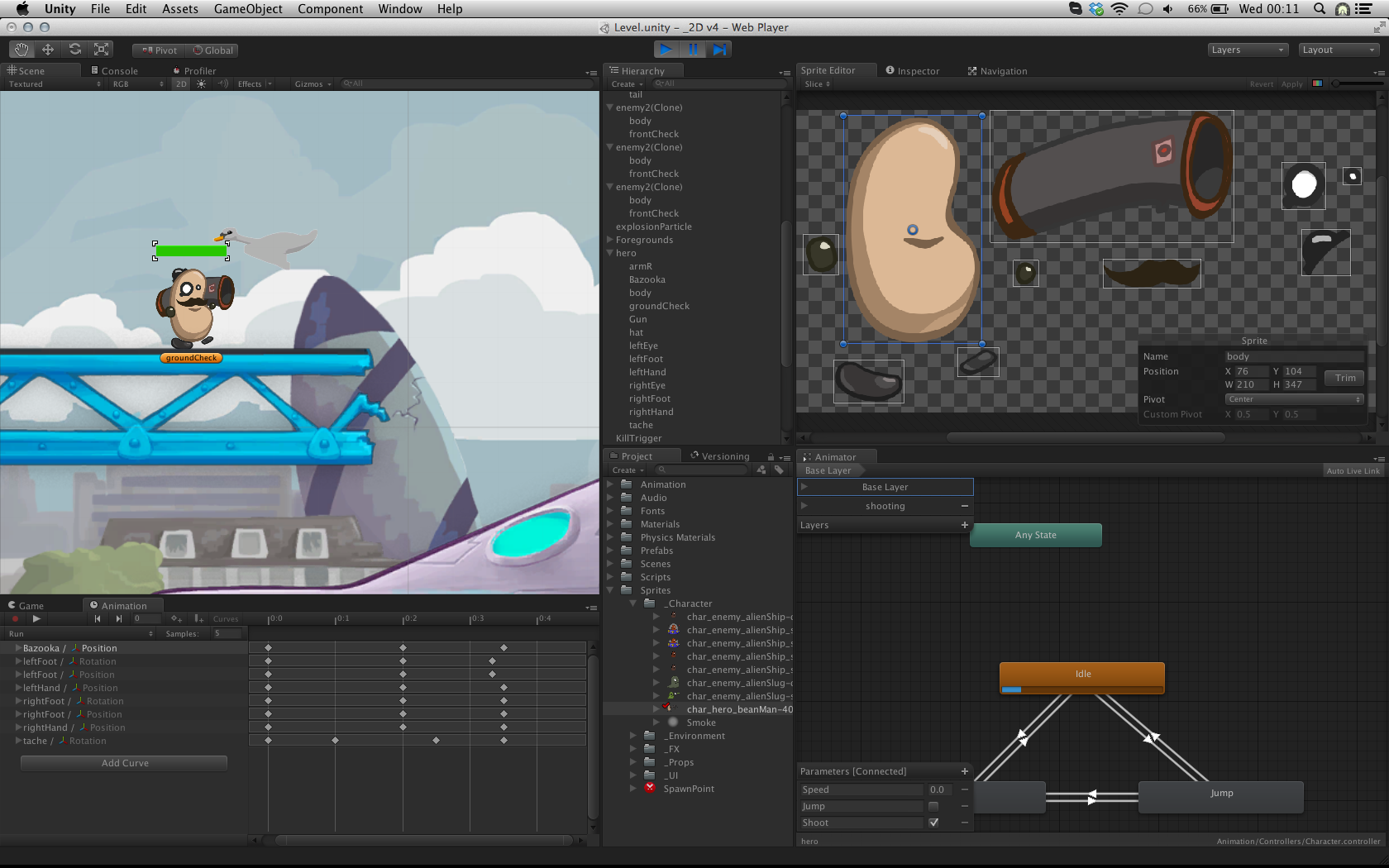 When they realized that as many as half of the Unity Games hitting the App Store were 2D games, though, Unity figured it was time to embrace it.

With the release of Unity 4.3 this fall, Unity will be picking up a whole new 2D workflow and set of tools, effectively letting it double as a proper 2D game engine. To get all technical for the 2D game geeks out there: it’s getting a proper, drag-and-drop sprite importer, and built-in texture atlasing (so you can cram a bunch of sprites — like, say, the individual frames of an animation — into one mapped image for the sake of performance). It’s getting a built-in sprite animation editor, and a dedicated 2D renderer with things like layers/depth and parallax scrolling.

(Interesting side note: Helgason tells me that the biggest challenge in finally supporting 2D was figuring out a good workflow — an interface for 2D that worked well and still felt like Unity. They fell in love with the work of a third-party developer, Juha Kiili, who’d built a bunch of 2D add-on tools for the community. So they hired him to lead the charge into 2D.)

Unity has also integrated the open-source and super popular Box2D physics engine, which powers the physics in so many 2D mobile games that it’s crazy. If you’ve played Angry Birds, or Limbo, or Rolando, or Tiny Wings, you’ve seen Box2D in action.

Helgason also announced a new tool that they’re calling Unity Cloud. Before you start dreaming of a drop-in solution for game saves in the cloud (à la Steam Cloud), Unity Cloud is a built-in advertising/cross-promotion solution for Unity developers to tie into their mobile/tablet games.

Once integrated, Unity developers set the points in their game where they want full-screen, interstitial ads to be allowed to pop up. They can then control the ads via a web interface. Just launched your game and want it to be an ad-less experience until it proves popular? Just keep all the ads disabled, then check the box in the web interface when you’re ready. Made a sequel and want to promote it? Use the web interface to change all the ads to one supporting your new game.

So far, Unity says they’ve partnered with around a dozen game publishers (Glu, Supercell, and Kabam, among others) to fill their ad inventory.

Helgason tells me that the ads will likely be somewhat simple at first, but will eventually evolve to support much of what the Unity Engine as a whole supports. Imagine being able to advertise your game with a level from your game, loaded on-the-fly.

Back in last year, Unity launched a publishing arm called Union. Union existed to find the best examples of Unity games, and help them get onto platforms they probably otherwise wouldn’t, or that Unity didn’t officially support for most developers — things like the Roku box, or Samsung’s Tizen platform.

Today, Union becomes Unity Games. Besides the name change, the primary difference is the stage at which the team might take interest in a developer; rather than waiting for a Unity-based game to prove popular, Unity Games will be open to helping early stage/conceptual games find their footing. Once a game is under their label, Unity will help the developer both in building the game and distributing it, and with things like testing, analytics, and user acquisition.

It’ll be interesting to see how Unity Games does. They didn’t have any breakout/smash successes as Union — at least, not any that I’m aware of; will opening the doors to earlier stage developers help them find and nurture a hit?