Swipe is the latest in a series of “people discovery” apps to pop up over the last year or so, connecting users who have expressed interest in one another. In that way, it’s not that much different from apps like Tinder or Let’s Date. But GameChanger Labs, the startup behind the Swipe app, hopes to provide a bunch of features that will keep users coming back for more, even after their users meet one another offline.

If you’ve used a mobile dating app recently, you’re probably familiar with the mechanics of Swipe. Log in with Facebook Connect and the app shows a series of other users you might be interested in. It’ll let you know if they share interests or friends with you, based upon the info it gets from Facebook. You can also drill down and check out the other user’s description and up to four additional photos.

If it seems like someone you might be interested in, you swipe their photo to the right. If not, swipe left. And if someone you’ve expressed interest in also swipes right on you, well then you’ll be notified that you have a match!

And that’s when the fun starts. In other dating or “people discovery” apps, matched up users can message one another, and that’s about it. You message each other and then eventually you get each other’s contact info, and then you meet IRL. Or maybe not. But the point is that after that initial connection, your interaction ends up moving offline, or at least off-app. 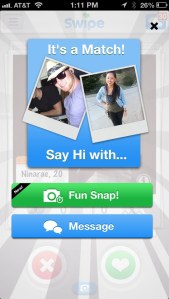 Swipe wants to be different — it wants to provide ways that its matches continue to communicate with each other after they’ve connected. The first feature it’s enabled allows users to send photos to their matches, and, just like Snapchat, have those pictures disappear after a period of time.

Ephemeral photos don’t have to be shot in the moment, as they do in Snapchat, but they can be sent to multiple matches at once. So you can send your favorite selfie to everyone you know shares an interest in you, all at once.

For Swipe, those interactions are designed to take it beyond being just a dating app and to become a “mobile entertainment platform,” according to co-founder Jon Viner. Photos are just the first step. The company is looking to add more interactions over time, including the ability for matches to share stickers and doodles, and play mobile games together — all from directly within the app. 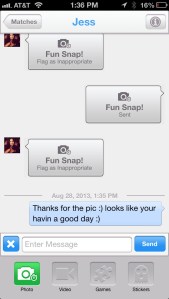 That means creating a whole new social graph within Swipe, of course. But it also means that its users aren’t as likely to take their conversations with other users to SMS, or email, or whatever the kids are using these days.

GameChanger Labs was founded by Jon and Josh Viner, brothers who came out of the social gaming space. They previously built the Facebook sports game “PageFad,” which had millions of users around the world. To help grow their latest venture, the two recruited former Zynga VP of studios Bill Mooney as their COO. While there, Mooney was in charge of games like Farmville, Zynga Poker, and Mafia Wars.

The startup already has 15 employees working on building new features and interactions into the app, thanks to an undisclosed round of seed funding. While GameChanger Labs won’t say how much it’s raised to date, investors include Lightspeed Venture Partners, Bullpen Capital, Blumberg Capital, Matt Ocko, Tarkan Maner, and Karl Jacob.