Yahoo rolled out a major redesign to several of its web properties today – a move that’s part of a project apparently code-named “Grand Slam.” At least that’s how it was recently described in a Vogue profile of Yahoo CEO Marissa Mayer, which said Grand Slam is “an effort to bring a more coherent look and identity to Yahoo’s pages.”

The updated, revamped sites today include Yahoo! Sports, Yahoo! Movies, Yahoo! Music, Yahoo! TV, Yahoo! omg!, Yahoo! Games and Yahoo! Weather, but the company says that these redesigns will continue across all of Yahoo’s properties, with the goal of making the Yahoo experience one that’s “more personal and consistent.”

The makeover isn’t just one of look-and-feel, however, but is one that will also include changes to Yahoo’s advertising, with support for Stream and Billboard ads, and more yet to come.

The Yahoo Weather makeover is one of today’s standout upgrades. It’s familiar to those who have downloaded the Yahoo Weather mobile application on iOS or Android, as it features Flickr images in the background, overlaid by the same modern-looking, minimalistic weather dashboard that appears in the mobile apps. 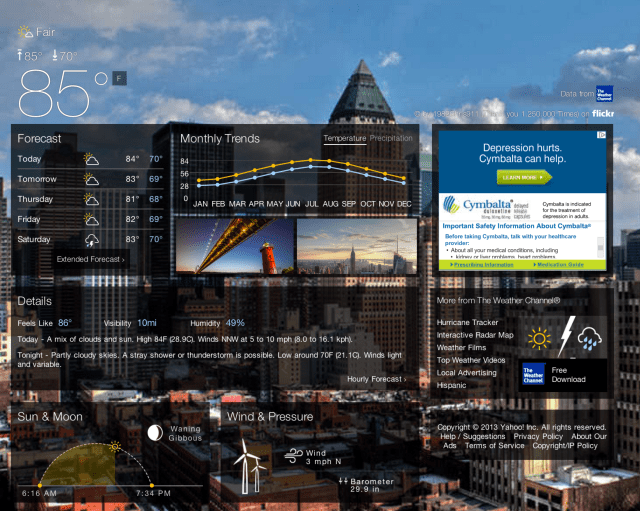 Meanwhile, Yahoo Sports’ revamp also includes a refreshed Yahoo! Fantasy game, which Yahoo claims makes it easier to use. The other sites have seen similar changes, with the goals of making both navigation and accessing content simpler.

Yahoo has been making a series of changes to its online web properties in recent months. In February, it kicked things off with a new, more personalized Yahoo.com home page, which now adapts to visitors based on the stories they click on as well as direct feedback about the kind of news they want to see. Later, the company rolled out an updated Yahoo News, again with the overall cleaner look and also with semantic-based technology under the hood, which understands the “who’s” and “what’s” of the topics the stories cover, allowing visitors to dig even further into the subjects they care about, or eliminate others.

But this redesign is more than just a visual makeover. As noted on Yahoo’s Advertising blog, the company is also bringing its Yahoo! Stream Ads native advertising format to all the new properties as well. These native ads now appear across the updated sites. Adweek earlier described these Stream ad units as mirroring unpaid in-stream content by displaying a thumbnail image, hyperlinked headline and text. The advertisers can link to any URL they want, including websites, blogs, Facebook pages, and more. The ads will be labeled as sponsored content to the end user, and will include different coloring for the AdChoices icon. 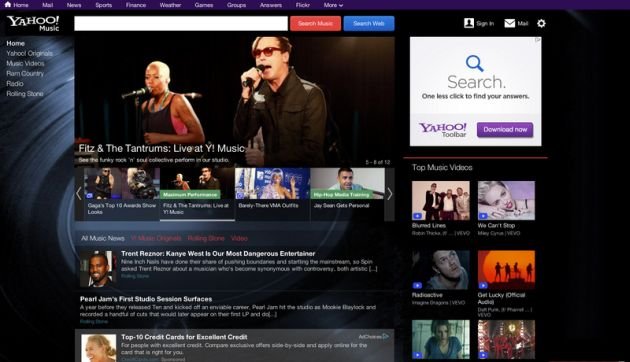 The Stream Ads are also being made available for Yahoo! Mail on desktop and on the Mail app for Android, where they will appear at the top of user inboxes, also identified as Sponsored Content. Stream ads are designed to work across desktop, mobile and tablet, the company tells us, including on Yahoo’s flagship mobile application.

The Billboard ad format, which can include interactions like watching movie trailers or buying tickets in the ad, will also be available across Yahoo’s newly updated sites. Today, Yahoo Sports features an example of the Billboard ad, with a large banner from Samsung, which includes a video of a Samsung commercial, for example.

That’s why Yahoo’s alluding to other, new ad formats is interesting. The company did not disclose details, only saying that “for every improvement we’re making to our user experience, we’re also thinking about how we can innovate the ad experience as well.”

Today, Yahoo’s ad revenues are still challenged, however. The company reported display revenue was $472 million in Q2, a 12 percent decrease from from Q2 2012. The company has been infusing itself with new talent, through an unprecedented acquisition spree. During the second quarter, it used a net $1 billion in cash for acquisitions, including a net $970 million to acquire Tumblr.