Amazon today announced it’s expanding its long-running Amazon Associates program to mobile app developers. The affiliate program, which allows members to advertise and link to Amazon products for percentage of the sales, will be made available to participating developers through a newly launched Mobile Associates API. In addition, the company says that it will also offer the ability for mobile app developers to sell physical products from Amazon through in-app purchasing.

The Mobile Associates API will be made available to Android app developers building apps and games for the Kindle Fire and other Android devices, and will offer developers from 4 percent up to 6 percent on qualifying customer purchases. The items can include either physical and digital products which Amazon sells.

This opens up another avenue for monetizing mobile applications, Amazon explains, saying that before developers have been limited to in-app purchases, ads, and subscriptions.

In the company’s announcement this morning, Mike George, Vice President of Amazon Appstore, Games and Cloud Drive, provided an example of how this could work, saying “imagine a developer of a nutrition and fitness app can now offer their customers the ability to purchase vitamins, supplements and fitness gear within the app, directly from Amazon.com. It offers the customer a more relevant experience and provides the developer with a new source of revenue.”

After a test with Activision’s “Skylanders Cloud Patrol” last year, which offered toys of the game’s characters, Amazon moved forward with its plans to roll out the API to others. Early testers of the program include Animoca, Fismos, Days of Wonder and Spring2Partners, which are integrating the program into their apps and games.

Days of Wonder will offer a version of its game “Ticket to Ride” in both a digital and physical version.  Animoca’s “Thor: Lord of Storms” will feature relevant goods in its game, like Thor’s hammer and action figures. Frismos’s “Creatures of Olympus” will tie in mythology-themed products with its game, and will also be taking advantage of a “Digital Bundling” feature to allow customers to use the virtual currency in the game for the purchase of products in the app. 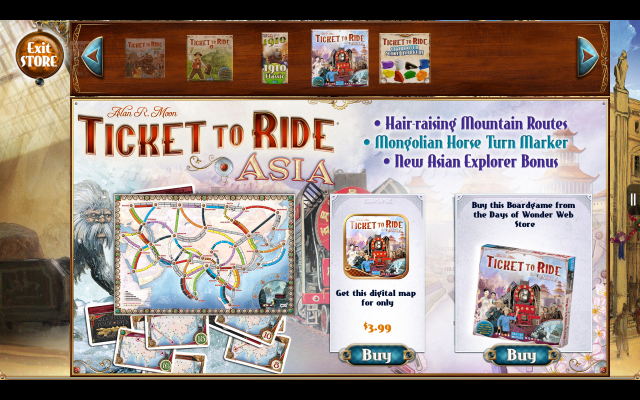 Spring2Partners’ SpringPad app, an Evernote-like personal assistant, will integrate the new API in the app to connect customers’ plans, ideas, and other saved items to purchases, like books, movies, home improvement goods and even travel-related items.

The app publishers are able to direct their customers to a mobile checkout experience through in-app purchases, says Amazon. Here’s how it works for end users: a customer initiates a purchase from within an app and is then presented with a dialog box showing the product details and cost. The customer can then complete the purchase using Amazon’s 1-Click purchasing, and then the items will be shipped directly.

Developers can either sell a single item, showcase a category of goods, or bundle a physical product with digital content within their application. To implement the API, app makers choose from a specific set of ASINs (Amazon Standard Identification Number), search terms, or use the Amazon Product Advertising API to query a list of ASINs and product information.

While many companies and startups already use affiliate programs in their applications – for instance, some e-commerce aggregators and product recommendation services point to Amazon.com and take a percentage of those sales. Some note-taking apps also send customers to related sites to make purchases, when need be, including Amazon and iTunes, among others.

But Amazon is today making it easier for developers to integrate this behavior into their applications, while also likely decreasing cart abandonment rates by handling the checkout experience through Amazon 1-Click. The company has a big advantage in that it already has the credit card details for million of customers on file, as well.

Amazon’s move to physical goods comes shortly after Facebook ended its plans to sell physical goods via Facebook Gifts, to instead focus on digital gift codes and its own gift card. At the time of Facebook Gifts launch in September 2012, it was believed it might challenge Amazon on gift sales. That turned out to be far from the case, as the sales were slow and minimal.

A Quick Start Guide for the new Mobile Associates API, sample code, and documentation is available here on Amazon’s site.