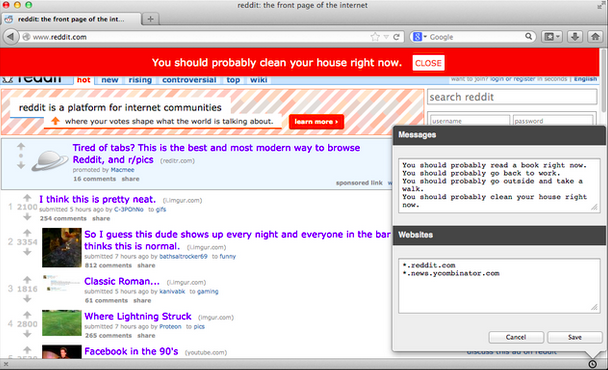 We all have our e-vices. Those sites that you catch yourself browsing with a half-focused gaze. The ones that nibble away at your time and leave you wondering what the hell you did all day, and how you ended up with page after page of purple links but not one thing scratched off your to-do list.

For some, it’s Hacker News. For others, it’s metafilter or Facebook. Hell, for some, it’s probably TechCrunch. For me, it’s Reddit.

“You Should Probably” is a Firefox extension that tries to wean you off those sites by nagging at you with better uses for your time.

Unlike extensions like LeechBlock (Firefox) or Nanny (Chrome), “You Should Probably” doesn’t block sites. Instead, it just throws a big, bright, closeable banner on top of each of your pre-selected time-sucks, reminding you that you could be doing… well, anything else right now.

You can customize and add to your list of alternative suggestions, and apply the banner to any site you choose.

Want to ignore the banner and keep doing what you’re doing? Go right ahead — just be conscious of your decision. It’s not a strict parent, but a helpful (whiny) friend. The banner is placed right at the top of the page in a way that blocks the core navigation elements on many sites, so you’ll have to look at it on the regular.

That distinction — nagging, over blocking — is why I love this idea. I’ve tried plenty of those blocking extensions before; in every case, I’ve uninstalled them after a few days. For every minute of productivity they helped me find, they introduced two minutes of frustration whenever I needed to visit a site for whatever legitimate reason. The problem with time-gobbling sites isn’t when you deliberately choose to go there, it’s when you zone out in a productivity slump only to de-glaze your eyes and find yourself there. Like when you realize you’ve looked in your fridge eight times in the past hour, despite not being all that hungry in the first place.

I just wish it could pull items straight from my own to-do list. “Oh, you’re reading yet another Today-I-Learned factoid that you’ll probably forget by tomorrow? You should probably write that email that’s been on your to-do list for 6 days.”

As far as I can tell, the extension is Firefox-only at the moment. If you know of something like this for Chrome, drop it in the comments and I’ll add it to the post.