In a surprising move today, Microsoft just announced that long-time CEO Steve Ballmer will retire in the coming 12 months. He will stay at the helm of the company until a special committee appoints a new CEO.

“There is never a perfect time for this type of transition, but now is the right time,” Ballmer said in the company’s press release. “We have embarked on a new strategy with a new organization and we have an amazing Senior Leadership Team. My original thoughts on timing would have had my retirement happen in the middle of our company’s transformation to a devices and services company. We need a CEO who will be here longer term for this new direction.”

On July 11, Microsoft announced a major reorganization to focus more on hardware. Ballmer signaled this change after firing Steve Sinofsky. At the time, he said that it was “imperative that we continue to drive alignment across all Microsoft teams, and have more integrated and rapid development cycles for our offerings.”

Instead of separating the company into multiple divisions (Windows, Office, Entertainment, Online…), Microsoft is now divided into functions to serve a single purpose (Operating systems, Devices, Apps and services…), very much like Apple.

That’s why today’s news is even more surprising after Ballmer achieved such a big change for Microsoft. If his successor doesn’t like the ‘One Microsoft’ vision, he or she will have to do another reorganization.

Even before Steve Ballmer’s retirement, commenters talked about a potential CEO for Microsoft. While he was fired recently, Steven Sinofsky was one of the most powerful executives at Microsoft and many regarded him as a Ballmer successor. Julie Larson-Green is another candidate. Microsoft has chosen to announce that Ballmer is on his way out before appointing a new CEO, which may indicate that his departure might come sooner than expected. The newly appointed special committee probably doesn’t have a name for the next CEO yet.

Steve Ballmer became Microsoft CEO after co-founder Bill Gates retired in January 2000. Since then, the company has been very successful with products like Windows XP or the Xbox 360. On the other hand, it has developed controversial products as well, such as Windows Vista, the Kin, the Zune and more recently the Surface RT. He’s also famous for his “Developers, developers, developers” rally cry.

Over the past 10 years, Microsoft shares have been mostly flat, while other companies such as Google, Apple or Amazon have soared on the stock market. Shares are currently trading up 9 percent in pre-market hours.

I am writing to let you know that I will retire as CEO of Microsoft within the next 12 months, after a successor is chosen. There is never a perfect time for this type of transition, but now is the right time. My original thoughts on timing would have had my retirement happen in the middle of our transformation to a devices and services company focused on empowering customers in the activities they value most. We need a CEO who will be here longer term for this new direction. You can read the press release on Microsoft News Center.

This is a time of important transformation for Microsoft. Our new Senior Leadership team is amazing. The strategy we have generated is first class. Our new organization, which is centered on functions and engineering areas, is right for the opportunities and challenges ahead.

Microsoft is an amazing place. I love this company. I love the way we helped invent and popularize computing and the PC. I love the bigness and boldness of our bets. I love our people and their talent and our willingness to accept and embrace their range of capabilities, including their quirks. I love the way we embrace and work with other companies to change the world and succeed together. I love the breadth and diversity of our customers, from consumer to enterprise, across industries, countries, and people of all backgrounds and age groups.

I am proud of what we have achieved. We have grown from $7.5 million to nearly $78 billion since I joined Microsoft, and we have grown from employing just over 30 people to almost 100,000. I feel good about playing a role in that success and having committed 100 percent emotionally all the way. We have more than 1 billion users and earn a great profit for our shareholders. We have delivered more profit and cash return to shareholders than virtually any other company in history.

I am excited by our mission of empowering the world and believe in our future success. I cherish my Microsoft ownership, and look forward to continuing as one of Microsoft’s largest owners.

This is an emotional and difficult thing for me to do. I take this step in the best interests of the company I love; it is the thing outside of my family and closest friends that matters to me most.

Microsoft has all its best days ahead. Know you are part of the best team in the industry and have the right technology assets. We cannot and will not miss a beat in these transitions. I am focused and driving hard and know I can count on all of you to do the same. Let’s do ourselves proud. 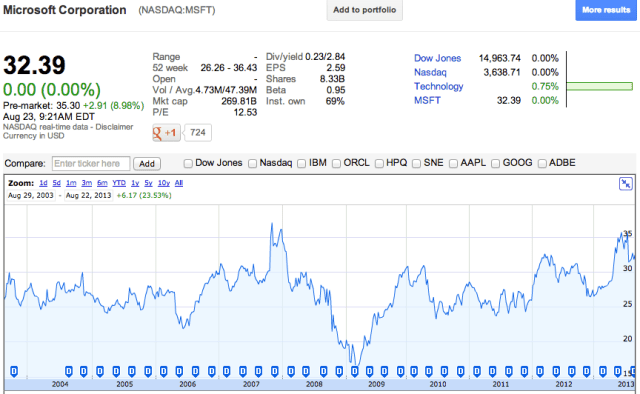