Apple may be testing changes to its iTunes App Store ranking algorithms, which see it taking into account app ratings and other new factors in the App Store Top Chart rankings. Whether or not the changes are more experimental in nature or indicative of a larger overhaul of how apps are ranked in the Top Charts is not yet known. However, these changes have resulted in apps losing and gaining in position without a corresponding increase or decrease in app downloads.

Boston-based app marketing startup Fiksu was the first to notice this trend in late July, having seen apps with ratings of four stars or more receiving a ranking boost, which they’ve maintained throughout August. Meanwhile, apps with fewer than three stars dropped down in the charts, and haven’t moved back, despite downloads remaining relatively consistent. Mid-rated apps of 3 to 4 stars have not been as affected.

Previously, the App Store took into account download volumes and velocity as the two largest factors that determined an app’s rank, the firm noted in its report. But now how well consumers actually like the app could be coming into play.

There’s also some evidence that the rankings for the newest version of the application may have more influence than those for older versions, which would make sense in this scenario, given that an app publisher may roll out an update to a historically well-reviewed and highly ranked app that’s a dramatic and unwelcome change causing a surge in negative reviews.

Another major shift that Fiksu has seen for several weeks now is a slowdown in how often apps change their position. In the past, apps’ ranks would update every 15 minutes, allowing developers to really see the impact of their new installs. Lately, though, app positions are changing every three hours on the consumer-facing App Store. 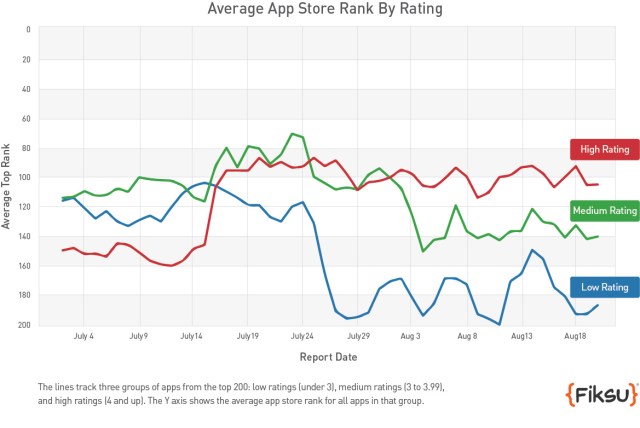 This latter change would go a long way to help prevent app developers from using automated means to game the App Store charts. Potentially, the slowdown would give Apple time to identify “short download bursts,” explains Fiksu, which are often associated with robotic downloads and other inorganic means of acquiring downloads. In theory, the delay could allow Apple the time to look for anomalies in download patterns, and prevent apps from entering the charts when their “growth” had been bought and paid for. (Update: After tracking this over the weekend after the initial publication, AppsFire found that the 3-hour rule was not being enforced as Fiksu had found, which could indicate Apple was only testing this change, not making it permanent).

It’s interesting that this change came around the exact same time when an app called Glide was climbing the App Store charts, reaching No. 1 in social networking and No. 16 overall, despite numerous reports from users claiming the app was spamming their contacts to acquire downloads, a now all-too-common behavior. (Glide’s user interface made inviting contacts to Glide an opt-out instead of opt-in behavior, and used other techniques that left users surprised, then angry, about its methods.)

Glide is neither the first nor the last to attempt to “growth hack” its way to the top of the charts, of course, but it’s a good example of the kind of app that would have been kept out of the rankings by such an algorithm change. As angry users filled the App Store with negative reviews and one-star ratings, the new algorithms could have possibly prevented the app from ever reaching the top 20 in the first place. Fiksu says it’s currently unclear whether the actual reviews (volumes or validity) are being taken into account here as well, but that it would make sense if they were.

According to Ouriel Ohayon, CEO of app discovery and marketing service Appsfire, some developers are also noticing that Apple is taking into account refunds and is processing revenue data differently for free-to-play games, as well. He had specifically noticed changes in the Top Grossing Ranks, noting that Pandora and Rdio had never been so high. (Pandora is now No. 1).

However, Ohayon cautions that this change won’t mean that Apple has eliminated publishers’ ability to game the charts entirely. “Ratings are still massively gamed, and the boost of ranks can still be achieved via many ad networks, even if the pace is decreasing to three hours,” he adds.

Meanwhile, MobileDevHQ CEO Ian Sefferman, whose company keeps more of an eye on app search results than rankings, says he’s noticed some recent changes affecting another aspect to the App Store as well. The search results are different when searching for iPhone apps from the iPad, when they used to the same as when you searched from an iPhone. Combined with Fisku’s data, this seems to indicate that Apple is focusing on improving app discovery overall, rather than just ranking tweaks.

That seems to be the case, as Niren Hiro of SearchMan, notes they’ve been hearing anecdotal reports from developers in both the U.S. and Japan who say that new user engagement (time spent, day 2 opens, ongoing opens, etc.) are also now increasingly affecting category rankings, and that as of August 5th, this change took place globally. (One example below, in the chart).

As with any App Store algorithm change, it soon becomes a game of whack-a-mole. Apple has to soon try to work around the tactic that developers come up with in order to limit the damage from whatever new metric could cause their apps to decline in the charts. In the case of ratings, that appears to be a method where app users are diverted to third-party tools to leave their negative reviews, allowing developers to send only positive reviews to the App Store.

While anecdotal reports aren’t enough to go on, tracking engagement would be a promising change. If it was a factor in rankings, even developers trying to game the App Store through the methods described above would find their plans foiled. Then, the best way to reach the top of the charts would be to build a quality, engaging app…just as it should be.