Google has a patent application published today (via Engadget) that would make the standard system of unlocking a device much more intelligent, using a smartphone’s built-in sensor to change your security settings on a sliding basis depending on where the phone finds itself. This would allow a user to make it easier to unlock a phone while in the comfort of their own home, while making it more difficult when the device is in a public place.

The invention is clearly designed to make it harder for a stranger or unwanted intruder to access your phone and its data when it may be easily lifted from your pocket or bag while in transit or at a public location like a cafe. In the end it’s a convenience feature, more than a security one, since the most secure option would be to use the most intrusion-resistant method of screen locking available at all times. But making things easier to access at home makes a lot of sense, in terms of decreasing friction and potential displeasure with the general user experience. 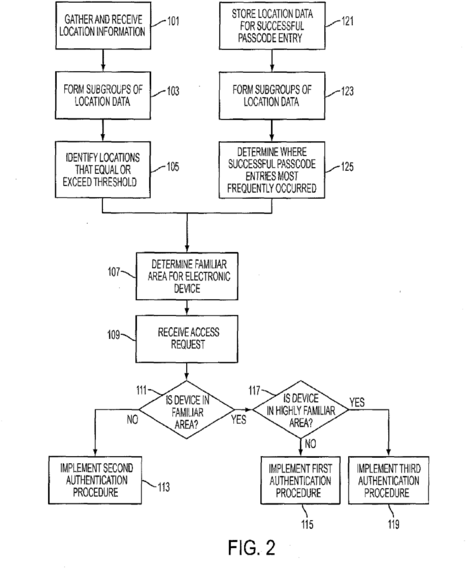 The patent as described also contains a provision that would allow for a third authentication method to be set for a second so-called “familiar area.” This would allow for a number of different possibilities, like setting different levels of security for home, work and the rest of the world, for instance. It’s a handy and noteworthy wrinkle in the patent app, since it could also make it possible to essentially set up a specific security profile required in professions where on-site security of data and mobile devices is paramount.

There are a lot of ways this could potentially be useful, in fact, and it’s one of those context-based features that Google seems to be focusing on with Google Now and recent updates to apps like Keep. In the future, you have a different phone depending on where you go, and that’s something most of the tech giants seem to be working on.