An Indian startup, Social Drones, is using its home-grown arsenal of bi, quad, and octo-copters to survey the effects of a recent natural disaster which claimed 580 lives, and is planning to courier medicines and foods to isolated victims. Drones don’t have the best reputation on the subcontinent and in the Indian state of Uttarakhand, sandwiched between war-torn regions of Pakistan, Kashmir, and Nepal, villagers no doubt harbour suspicions of the remote-controlled flying beasts infamous for dropping bombs. Social Drones hopes to change that perception.

The startup has joined forces with ten other Indian startups to form the Rise Uttarakhand campaign, where entrepreneurs will build apps and use their products to assist with the recovery effort in Uttarakhand, which was devastated by floods and landslides on June 16 and 17. There are still 5,100 people missing, including 300 foreign nationals.

About a month after the floods struck, Mane sent two of his staff and two of his $8,000 quadcopter drones to conduct aerial surveillance & navigation from up to 300 metres in the air. These images and videos are being given to organisation Help India 2013, a group of over mountaineers delivering food, water, and medical supplies to over 200 villages. Mane said the drones, which are 100% Indian-made, are operating in the areas between Uttarkashi and Gangotri, where about 5,000 local villagers have been stranded in makeshift camps since the floods completely wiped out the local infrastructure, including the 100km road that connects the two towns.

“The government didn’t make any footage available to the public because they couldn’t capture it so we thought, let’s go film the disaster and the volunteers, who are the real heroes,” Mane said. 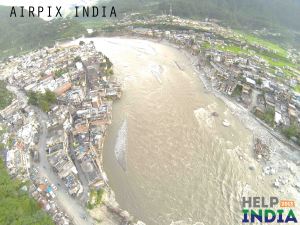 After seeing the mountaineers trek over 20 kilometres each day through the unstable mountainous terrain, Mane saw an opportunity to lighten the load by having his devices to deliver lightweight products, such as a first aid medicine box. The four-blade quadcopters couldn’t navigate the disaster conditions when the floods first struck a month ago but it’s a different story now that the fierce conditions have subsided. After running some early tests he is confident of delivering the lightweight objects starting from next Monday.

“A month ago the disaster management was there and they were recovering people and finding people but right now the majority of that work has been completed,” Mane said. “However, there are still people in various camps scattered across Uttarakhand and there are no linkages or channels to connect them. There’s no co-ordination with the government, which is mainly repairing popular tourist regions.”

Mane believes drones are the answer,  and is working alongside Dutch weather forecasting firm Aeolis, which is providing real-time satellite information to military and volunteers. Also Weekend Ventures recently organised hackathons in Mumbai, Bangalore, and Delhi, where one team developed a phone-based version of the Google person finder app.

“We think the aerial delivery would be the best option, as well as developing applications to co-ordinate all the volunteers. We’ve already designed those and are in talks with companies to deploy web and mobile apps to these areas.”

In a post-mortem of the event, Dr Saumitra Mohan, Darjeeling’s (West Bengal) district magistrate and tax collector, said real-time co-ordination and communication between all government and non-government stakeholders was crucial to combating these “man-made” disasters. In the article, published on India’s recent 66th Independence Day, he said poorly regulated mining and development work contributed to the severity of the landslides and flooding.

CORRECTION: The original version of this article said the drones delivered a range of objects including food and water purifiers. The quadcopters have only been tested to carry lightweight goods such as a first aid medicine box.