Video distributors are still trying to build new ways for viewers to interact with the videos that they’re watching online. The latest is AOL On*, which is launching a new video ad unit that is designed to get viewers to engage with video content, without all the hassle that is usually required to create an interactive ad unit.

AOL On’s new ‘Spot On’ ad unit was developed in partnership with Carambola, an Israeli startup focused on providing technology to build interactive ads. When it comes to video, interactive ads aren’t exactly new — for years I’ve received pitches about units that have unheard of click-through rates and engagement numbers.

The problem with these ads wasn’t that they weren’t effective — although some critics would argue that too much interactivity ends up spoiling the video — it was that they were difficult to create and deploy in an effective way. Interactive ads usually required a certain degree of work on the part of the brand or agency to get them built out.

That’s not so with the new unit that AOL On is introducing for its advertisers. According to Shahar Chaskelevitch, Head of Product Marketing at AOL Video, very little needs to be done to get these ads up and running. All an advertiser needs to do is provide some images to skin the ad unit to fit its brand, and then all the content displayed in the unit is dynamically created based on the video that’s being shown.

Carambola’s technology scans the video and uses proprietary algorithms to determine what type of additional content would be contextually relevant to the viewer, then serves it up. Check out this example, provided through AOL On’s Now Eat This channel with Rocco DiSpirito. An icon sits in the top left-hand corner of the video player, and when you hover over it it provides content like quizzes, recommendations for recipes, e-commerce offers, and information about the host of the show. What’s unique about it is that none of that information was previously entered into the unit — it was all generated automatically. 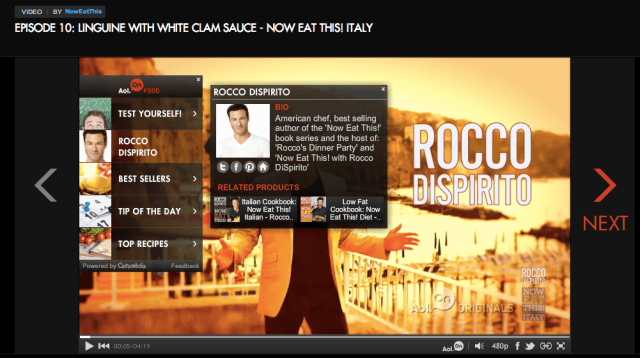 AOL On has been testing the unit across some of its original programming and found that one in ten viewers clicked on the unit to see what it was all about. And those viewers spent on average about 25 seconds interacting with the additional content, whether they were answering trivia questions or looking at recommendations or maybe trying to remeber who Rocco DiSpirito was. Since each unit is designed to match the channel’s content, they almost don’t even feel like ads.

And that’s the genius part for whichever brands choose to start taking advantage of these units — you know, getting people to use ads in ways that make them feel like they’re not ads.

Surprisingly enough, even though they’re interactive ad units, AOL On isn’t charging for them based on how much users interact with them. According to Chaskelevitch, they’re going with a cost-per-impression (CPM) model, rather than a cost-per-engagement model. But advertisers will pay a premium on top of the CPMs they pay to use the Spot On ads.

==
* AOL is TechCrunch’s parent company, after buying us however many years ago. I don’t usually have to interact with people from AOL that often, though, except when they’re not answering my emails about new hires.