Ink, home to the Ink File Picker (formerly known as Filepicker.io), which lets developers integrate access to cloud services within their applications, is today launching its second product, Ink Mobile. This new iOS framework is designed to help mobile applications talk to each, too, rather than just with cloud services. And more importantly, it lets them share data.

Launch partners for Ink Mobile include Evernote, Citrix Podio, egnyte, SignEasy, and doctape – apps often used in a business or enterprise environment, where work is increasingly taking place on iPhones and iPads. 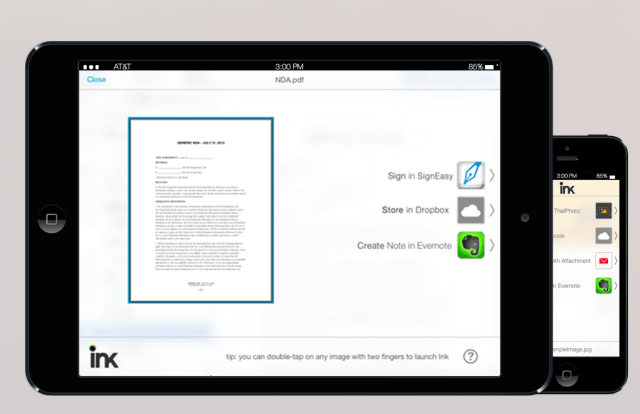 Explains co-founder and CEO Brett van Zuiden, “the problem with iOS, historically, is that each app has been this island, and not able to work with each other.” This is a similar problem to what File Picker addresses on the web – that websites couldn’t easily connect to cloud storage.

With the company’s previous product, the goal was to take the burden off developers who wanted to connect to, share with or process files from a number of online services, including things like Google Drive, Dropbox, Evernote, Facebook, Flickr, Picasa, Box, GitHub, SkyDrive, Gmail, Instagram and more. To date, adoption of File Picker has been booming with some 17,000 developers using the service across 20,000+ applications.

Now, as hinted at following the company’s recent $1.8 million seed round of funding, Ink has moved to focus on mobile apps, too. Because Apple limits how mobile apps can talk to each other, today’s app developers often have to rebuild all the features other applications already have in place. This is less of a problem on Android, where Android intents allow for much better communication between apps.

Meanwhile, the isolation of iOS applications can hamper users’ workflows – especially in work environments. To fix that problem, Ink’s solution with Ink Mobile is a mobile SDK which developers integrate into their application. They then add specific hooks for actions that their app can perform (e.g. send emails, create a note, share content with others, etc.), as well as for what kind of content the app has to share. 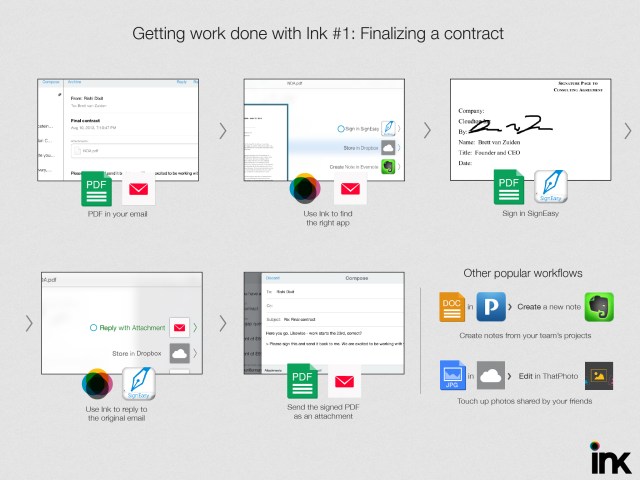 The company has also debuted three sample applications which demonstrate this functionality: ThatInbox, ThatPhoto, and ThatPDF.

Ink Mobile is slightly different from the recent initiatives involving the deep linking within mobile applications, including Twitter cards, Cellogic’s bit.ly-like Deeplink.me, and Quixey’s recently launched open AppURL scheme. “That’s what’s fundamentally new about what we’re doing as opposed to app deep linking – it’s not just opening another application to a specific page,” explains van Zuiden. “It’s opening another application to a given state with your content there, and actually allowing the information – the backend data – to move between these applications, all happening on the local device.”

Ink is not charging for Ink Mobile in its present form, and the feature set launching today will remain free. The plan, instead, is to eventually add premium features on top of this basic functionality, as well as sell into the enterprise to enable internal line-of-business applications to integrate with others, allowing corporate users to build and create automated workflows.

While initially, Ink will only work with a handful of apps, the company thinks that developers will adopt the technology as a way to have their app discovered through other, more popular applications which they could work with. If the technology then becomes more ubiquitous, users could begin to pressure their own favorite applications to support Ink as well. Or at least that’s the hope.

Given that Android intents have generally solved this problem on that platform, Ink plans to work on supporting web applications next.

If you’re wondering why this is something a third-party developer is working on, instead of something Apple has built into its operating system by default, you’re probably not alone.  But Ink isn’t willing to wait for Apple to do this on its own, says van Zuiden. He notes, however, that they are discussing the possibility of making Ink Mobile work with things like Keynote and Pages and other Apple apps.

The Ink Mobile framework is available as a free download here.