Pinterest has launched what may be the first of several official “hubs” featuring content targeting a particular segment of its user base, with today’s debut of a new “Pinterest for Teachers” site at pinterest.com/teachers. Obviously timed to coincide with the back-to-school rush and news cycle, the company tells us that the new hub will also serve as something of a test to see if it makes more sense to continue down this path in the future, with more hubs devoted to other interests or groups.

The Teachers hub was actually launched a few weeks ago, and grew to 1,300 users ahead of any public announcement or promotion — like today’s company blog post about the new section.

Here, Pinterest explains that it teamed up to work with Edutopia, an online resource for educators, to build out content for the hub, which at launch offers 19 boards, including those focused on preschool and elementary school teachers (grades K-6), as well as topic-based boards on subjects like art, science, math and other things teachers would finding interesting, ranging from classroom decor to recommended blogs. Each board is being maintained by a Pinterest user who’s also a teacher, most of whom also have their own educational websites or blogs, too. The Teachers hub will later expand to cover more areas and grades in the future, the company notes. 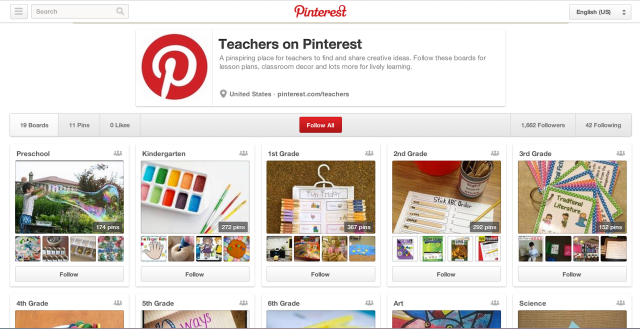 In addition to the fact that it’s simply that time of year for a back-to-school marketing push, Pinterest also adds that a teacher-focused board makes sense for the site because it has developed a large community of teachers using its service for tips and tricks, lesson plans, craft and activity ideas, and more. Edutopia cites Pinterest as one of the top five professional websites for teachers, and Pinterest today sees over 500,000 education-related pins added to its service daily.

But the hub’s launch follows several other recent pushes into content recommendations by Pinterest, including the debut of pin and board recommendations, first announced in late July. The company switched on an opt-out mechanism (“do not track”) at the same time – a hint of how deeply it plans to tap into user data in order to personalize the service. And at the end of last month, those same pin suggestions started showing up on mobile as well.

That being said, the Pinterest for Teachers hub is not going to be a part of any sort of personalization efforts right now, but rather will serve as a starting-off point for people coming to the site for the first time, possibly wondering what it’s all about. They may be looking for recommendations, such as whom to follow, or they may just want to browse around for inspiration. The hope is that by offering users the hub as a starting-off point (you can click around its pages without needing an account), those more casual visitors will eventually convert and create boards of their own, we’re told.

Pinterest evaluates whether or not all these plans hold up – not necessarily by looking at hard numbers, but at community engagement and feedback, including things like comments on today’s blog post or on its Facebook page, among other things.

Though the company does not have publicly announced plans for other hubs, the service is also seeing traction in categories like Food, Fashion, Design, Technology and the Outdoors. If it decides the hub concept works, these will likely be the next areas the company will explore.