GSF, an incubator endeavoring to become a “TechStars” for India and the developing world, just graduated its second batch of startups covering everything from trip planning in South Asia to CRM to cheaper electo-cardiograms.

The accelerator, which just started off a year ago, is the brainchild of longtime Reliance Entertainment executive Rajesh Sawhney. He’s been seeking a way to jumpstart a startup culture in India, even as multi-national foreign and domestic companies continue to recruit the best technical talent out of the country’s universities.

India has had a few notable growth-stage startups like advertising network InMobi and Flipkart, but Sawhney wants foster a broader pool of startups across the entire country.

Instead of concentrating the accelerator in a single city, GSF simultaneously runs a 10-week program in New Delhi, Bangalore, Mumbai and Chennai. Sawhney says this is because India has so many major cities with technical talent, each with their own strengths. Mumbai is at the heart of India’s entertainment industry while Bangalore is the tech hub that attracts foreign companies.

Since the first batch, Sawhney has added a few more weeks onto the accelerator program and strengthened the mentor system to help companies after they’ve graduated from the program. Out of the company’s first batch of 14 companies, eight have gone on to raise additional funding and GSF has participated in four of those rounds. 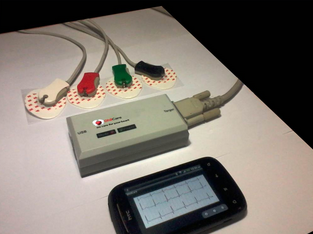 One of the more interesting companies to come out of this round is Dhilcare, a company that’s creating a very basic electro-cardiogram machine (pictured left) that can hook into smartphones and send reports for remote readings. The company estimates that there are 32 million heart patients in India, yet there are only 6,000 cardiologists. The vast majority of these patients also live in rural areas, where they have poor access to medical professionals. So Dhilcare’s basic ECG machine could allow rural patients to have access to diagnoses from remote doctors where there would otherwise have no ability to receive medical care.

The other companies include:

Clinchpad is a CRM platform that’s very visual and designed for smaller businesses.

Browntape lets merchants in India easily integrate and track sales analytics from all the major e-commerce platforms like Amazon and Flipkart.

Timesaverz is a startup that is kind of like a version of Exec in India, where people can book services like house cleanings and laundry on short notice.

Airstream lets consumers stream content from their PCs onto their mobile devices.

Tiny Surprise is a curated marketplace for baked goods and small, unusual gifts.

Flinto is a subscription e-commerce startup with a monthly box full of toys and games meant for three to seven year olds.

Tradestreet helps regular retail investors parse through stock research and trading strategies and was co-founded by a IIT graduate who worked for DE Shaw.

Ridingo is a ride-sharing platform for India, but it’s meant more for carpooling in highly-trafficked cities like Bangalore.