Woofound, a Baltimore, Md.-based startup, has raised an additional $2 million in seed funding for its image-based personality assessment platform for recommendations. Though the service appears to end users like a simple, “hot or not”-like Q&A application, the backend is crunching data and producing statistically sound personality assessments. This helps the service auto-match the test takers to various things, such as students to courses or clubs on campus that match their career interests, or unemployed job seekers with positions where they’ll be a good fit. 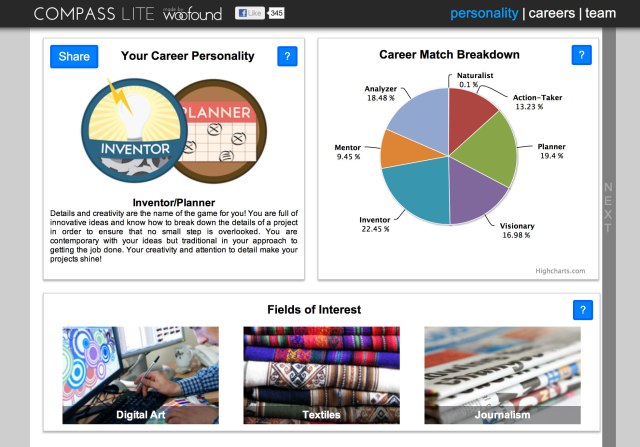 Woofound was created by co-founders Dan Sines (CEO) and Josh Spears in April 2011, and currently has two products on the market — an iOS app called Woofound Explore which matches people to places and activities, and its current area of focus called Woofound Compass.

Compass, which launched into beta last fall, is now being used to help guide students to courses and clubs relevant to their career interests at nine universities across the U.S. This includes the University of Maryland Baltimore County, Towson University, University of Washington, University of Tennessee, Knoxville, Georgia State University, and others.

“Where traditional personality assessments have taken hours to accomplish, or have a written-based process, this is all done with visuals, explains Sines. “That’s the signature behind our personality platform.”

To get started, users visit the HTML5 web application on desktop, tablet or mobile, and then flip through a series of questions with images attached and answer “me” or “not me.” The entire test is designed to be completed in around five minutes.

Unlike more formal personality assessments, like the Myers-Briggs for instance, anyone can administer the test, and there’s no need for someone to later interpret the results – depending on the use case, the matching of people to things (jobs, classes, other people, offers, etc.) is done automatically. In addition, because the questions are so simple, Sines says that Woofound avoids the Hawthorne Effect, which is where test takers answer questions the way they “think” they should answer them, sometimes in an effort to cheat the system. 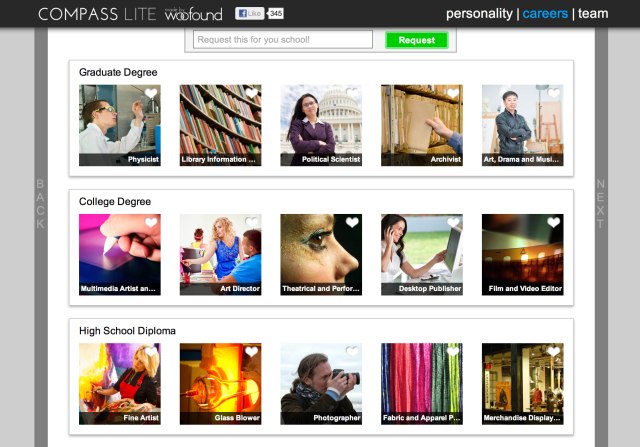 To date, the service has been used by nearly 20,000 students at the various university partners, though Sines notes that so far, many of these schools have only been live during their summer sessions. As fall semester begins, that number should jump quite a bit. Woofound can bring a new university online in about a day, importing course line-ups, club listings and more into the service, and much of the process is done through automatic imports and matching.

In addition to schools, Woofound also began working with local governments earlier this year to help connect the unemployed with jobs. The company has been working with the Workforce Development departments in Baltimore and two surrounding counties.  Job seekers at one-stops come in and take the tests as the first part of their career assessment.

Sines feels that building Woofound outside of the usual tech hotspots has been an advantage in his company’s case, noting also that they didn’t struggle with fundraising, which is somewhat unusual. “I think that so much of the startups in the Valley right now are focusing on things that are within their own bubble,” he says. “I think the ability to really help people is something we can do with this product – and what better way to help people in this economy than help them find a job?” 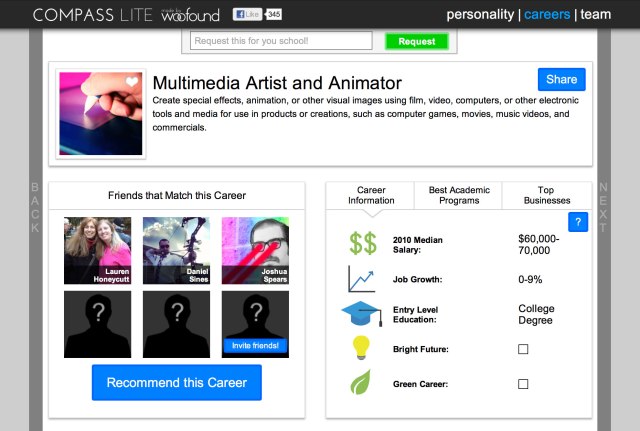 With the additional funding, Woofound will continue product development, namely its forthcoming API, which will allow other services to access its technology in their own applications. The company is talking with other job-listing services, but also sees the potential for using Woofound for marketing purposes and more. The team even built their own movie recommendations service internally, as well as a Facebook-connected version of Compass as a demo, and are considering launching an app in the social space (perhaps dating) later this year.

Sines declined to discuss Woofound’s revenue situation, but says that schools and other customers license its technology and pay based on their size.

Woofound is currently a team of 18, and may hire one or two more developers over the course of the year.