A new level of transparency from Facebook will help the world see whether its mobile growth is entirely propped up by international users that don’t earn the company as much money. Today Facebook announced it will start sharing country-by-country web and mobile monthly and daily user counts. Facebook’s 101 million US daily mobile users make up a whopping 78% of its 128 million daily US users.

Facebook’s global mobile daily active user count increased 10.3% from 425 million to 469 million from Q1 to Q2 2013. But how much of that growth was in its high-monetizing first-world markets? And how much was in its emerging international markets where more people are on feature phones and it earns less per user? Before we couldn’t tell. Soon we’ll be able to.

“We are doing this because we believe brands and businesses should think differently about how people engage with Facebook, especially on mobile. A lot of people focus on monthly active users or even registered users to demonstrate their size and scale. We think this is becoming on old way of looking at the media world. In this world, understanding who comes back at least once a month is only part of the picture. Instead, businesses should focus on people who come back online every single day.”

Facebook tells me it will soon start revealing user counts for other countries beyond the US and UK (whose full data is below) once teams in each country are ready. To be clear, total stats count each individual user as 1 regardless of whether they accessed from desktop, mobile, or both. Mobile stats count each user who accessed via mobile, whether or not they also accessed via desktop.

The data will certainly be helpful for advertisers trying to figure out which international markets they should be focusing their efforts on. Salesforce CMO and Buddy Media CEO until it was acquired) Michael Lazerow says “What we’re seeing in these numbers is Facebook’s ‘mobile first’ strategy has really paid dividends. This is an important update that should help advertisers to plan and target their campaigns more effectively.”

But for the rest of the world, this transparency provides a much better understanding of where Facebook’s business is headed. 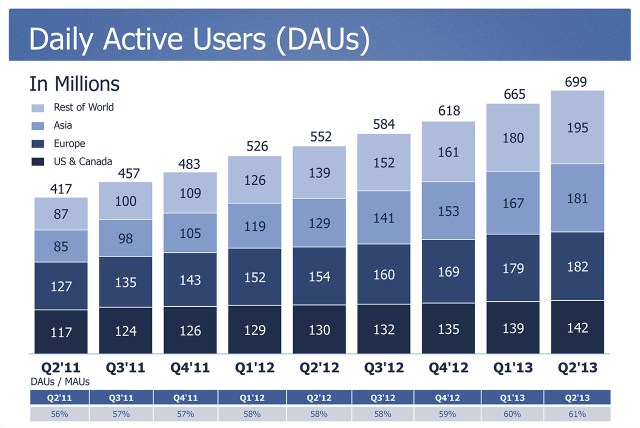 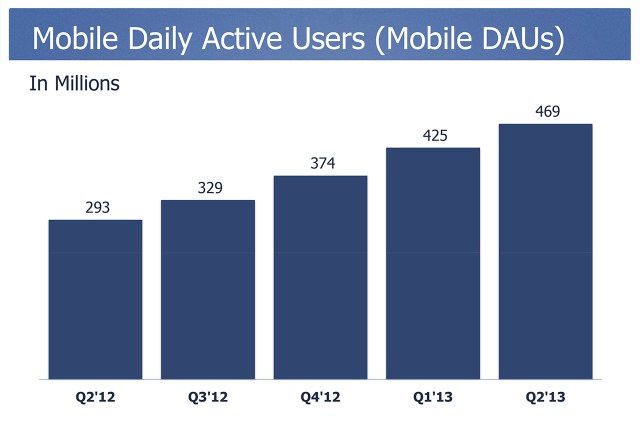 The reason that’s a problem is that all users are not created equal when it comes to Facebook’s business. In Q2 2013, Facebook said it made $1.60 in average revenue per user (ARPU) per year as a global average. But in the Rest Of World region that includes its fast-growing developing markets like India and Brazil, it only makes $0.63 per user while it earns $4.32 ARPU per year in the US & Canada region. That means every user it added in the Rest Of World market was worth less than 1/6th of what it makes per North American user.

That’s why back in May during Q1 2013 earnings coverage and again last month I requested that Facebook provide mobile user counts by geography. Soon we’ll have the data, and the little released today is already enlightening. For example, 78.9% of Facebook’s daily American users are on mobile, and in the UK 83% of daily users are on mobile. We can also tell that 71.5% of monthly US Facebook users come back every day, while in the UK Facebook has a “stickiness” of 72.7%.

The real juicy insights will come once we’ve had this data for a few quarters. In the short term, stats on Facebook’s fastest growing international markets and most critical first-world markets will be eye-openers. They’ll reveal whether Facebook is still growing its mobile presence in developed countries, or if it’s reached saturation there.

If Facebook has run out of rich first-world people to sign up, it may need to concentrate more on squeezing dimes out of the developing world by increasing ad salesperson presence and getting more local game companies onboard.

For now, though, the social network should be proud that it’s surviving the shift to mobile that many thought would be its demise. The company swallowed its pride, admitted it had made mistakes designing for desktop first and building apps on HTML5, and righted the course. Now it’s not only surviving, but thriving on mobile. With 41% of ad revenue coming from small screens and more than 3/4ths of daily users in it homeland visiting via phones and tablets, Facebook’s “mobile-first” strategy seems to be a success.

Facebook is starting the increased transparency with more detailed data on the US and UK. Here’s the full list of new stats: