From the two co-founders behind YouTube, MixBit is a brand new mobile-first video platform. But contrarily to other video apps focused on recreating a social network, MixBit is all about editing and putting your video clips together to create a medium-length video. Videos range from a few seconds to 68 minutes. Moreover, everyone can reuse someone else’s content and create a brand new video.

Shooting a video in MixBit is a bit like taking pictures at an event — you take pictures and edit them later, and you want to be sure to have enough content before leaving the event. In MixBit’s case, users capture up to 16 seconds of videos and save them to their phones.

After the event, the editing process can start. MixBit allows you to put all those short video clips together to create a meaningful, story-driven video. Up to 256 video clips can be stitched together. You can then share the result on Twitter, Facebook, Google Plus and MixBit.

Below each video, there’s a timeline representing the original video snippets that were used to create this video. Viewers can even use a snippet from your video for their own videos. Remixing videos is supposed to be a big part of the service but it’s too early to tell. For now, MixBit remains an empty canvas and users still have to create a new artistic language around the service.

MixBit is nothing like Vine or Instagram. The only similarity is that they are all mobile apps. Vine or Instagram users share videos seconds after something happens. In most cases, you share something because it’s beautiful or because you want to put your friends in your shoes. In other words, you take out your phone, shoot something, share it, and you’re done. The entire process is very different in MixBit. It takes a lot more effort to publish a video on MixBit than to shoot a quick Vine video.

Even when you open the app, it doesn’t look like Instagram or Vine. Videos don’t autoplay. Don’t expect to scroll through a few dozen videos while waiting for your bus either. Most videos are longer than a minute and sometimes much longer than that. The overall experience is closer to opening the YouTube app on your phone. You are presented with a feed of videos and select which one you want to watch based on its title and thumbnail. The main difference with YouTube is that it’s 100 percent user generated content. You won’t find a movie trailer or a music video on MixBit.

MixBit is available on iOS and the company will release an Android version in the coming weeks.

AVOS, the company founded by YouTube co-founders Chad Hurley and Steve Chen, is also the company behind bookmarking service Delicious. It teased MixBits a few months ago and even dubbed it as ‘the future of video.’ It sure seems like an interesting take on videos on mobile. 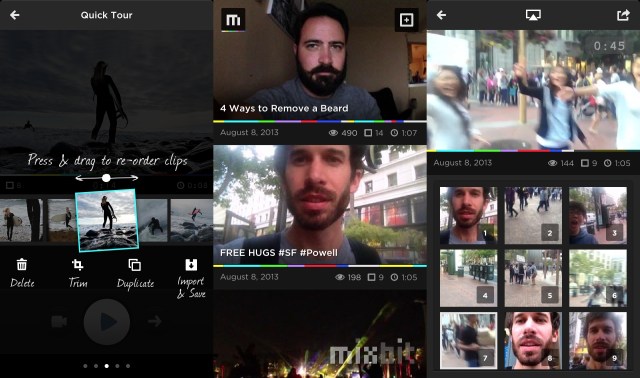