Streak has embedded Gmail into its new iOS app in a novel way to create a service that is turning the 600-million-user platform into a powerful CRM environment.

Gmail is a native app on iOS and has its own “sandbox,” the term to describe how apps are managed individually, essentially in secure, virtual containers. But Gmail does make calls to a server. And it’s in that data delivery that Streak does its magic. Streak fakes that it is Gmail. The Gmail server returns the same HTML, CSS and JavaScript that the regular Gmail app receives. However it is processed and modified so that it behaves and looks native. The app is also processed so the native parts of the app can communicate with it. It is also modified so Streak data, such as CRM information, can be added to the emails.

The experience is the same as Gmail, but instead Streak presents access to the customer’s pipeline with a  horizontal slider that shows the different stages of the deal. 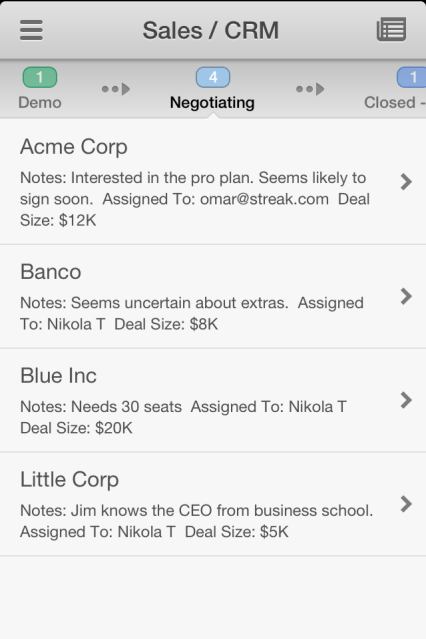 The app provides the user with access to the details of the deal, such as where it came from, the price, the contact, who assigned it, etc. All the emails for the CRM app can be viewed without it getting pulled into the Gmail inbox.  A global news feed keeps the team updated about different deals. 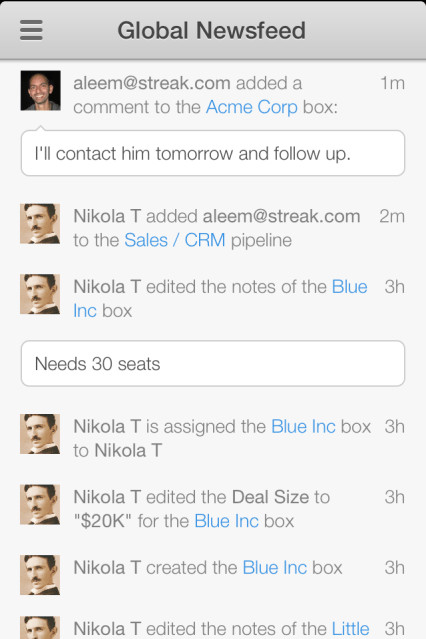 Data can be naturally input into the app through the Streak interface, which makes it handy for when a sales person is on the run. For doing several updates, the Streak desktop would be preferable. All data is automatically synced so updates are made simultaneously to the mobile and desktop apps.  Data, is synced and cached offline.

Streak connects directly into a user’s Gmail but not Outlook or any other enterprise email platform. There are no intentions to integrate it with Outlook, either. Gmail has 50 million business users and growing. Outlook has lost market share but it should be noted that Outlook.com has grown steadily to more than 60 million users, albeit with a fairly loose definition of who actually is an active user.

The team at Streak has built a compelling service. The core difference is in the company’s approach to how data gets organized. All the data is framed within the metaphor of a sales pipeline, not a contact as Salesforce.com does.  With Salesforce, the information architecture requires considerable data input across different categories: account, organization, lead, contact and opportunity. The Salesforce mobile strategy reflects its architecture in that it has taken a more micro-approach, letting developers build whatever they desire from different data chunks from the CRM platform.

Streak uses a freemium model, similar to what Yammer and others used to build their own businesses. Since it is free, the adoption can be pretty steep. But if IT seeks control, they have to pay up. That has always seemed a bit underhanded to me. I’d be interested to hear from IT people about how they have dealt with services that take this approach.