Amazon today is announcing a significant expansion to its mobile application marketplace, the Amazon Appstore, which will now be open to developers of HTML5 web applications and mobile websites. These web apps will be discoverable and sold alongside other native Android applications on any device where the Amazon Appstore is able to run, including, of course, the Kindle Fire.

At launch, a small handful of web applications have been added to the Amazon Appstore catalog, including “Happy Tree Friends: Run & Bun” from TreSensa, “Dream Pet Link” from Spil Games, and “Video Game Reviews, News & Previews” from IGN Entertainment. However, today’s announcement is more about making it known to developers that the Amazon Mobile App Distribution Program is available, rather than touting a lineup of new additions.

To date, the major smartphone app stores, including Amazon’s as well as Apple’s iTunes App Store and the official Android app marketplace, Google Play, have only made native applications available for search, discovery and download. Though web app developers have certainly targeted these markets in the past, they would first have bundled their HTML5 code in a native wrapper of sorts, using something like PhoneGap, Titanium, or Corona, for example. 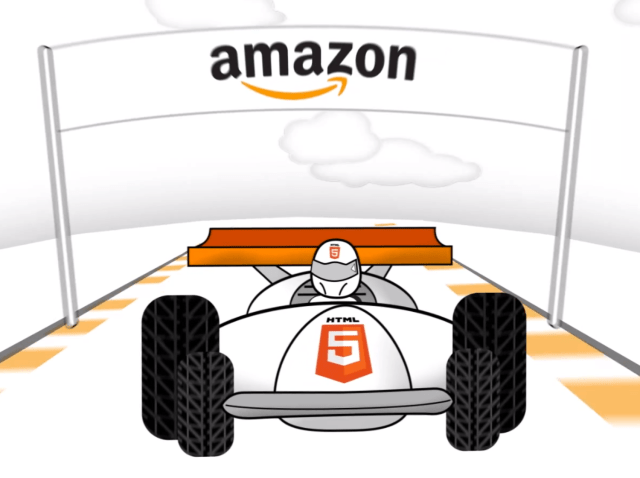 With Amazon Appstore’s support for HTML5 web apps, however, the process for a web developer becomes even easier as it doesn’t require developers to do any native app development at all, or use any third-party software. Instead, they submit their URLs and other metadata (e.g., images, product descriptions, etc.) to Amazon, who will then package it up in a format that makes it available to millions of Kindle Fire owners, as well as any other Android smartphone or tablet owners who have the Amazon Appstore running on their device.

Amazon is using its own in-house technology to make all this possible, explains Appstore Director, Aaron Rubenson. However, for Kindle Fire specifically, he says the company has built something more. “For Kindle Fire, we’ve built a new, faster web runtime environment based on the Chromium project. Other devices will use the web runtime environment that comes with whatever device the consumer happens to be using,” Rubenson says.

The web applications won’t be categorized separately from other natively built applications in the store, making the distinction between native and web apps more of a blurry line for consumers.

One-Click For the Web Apps

In addition, web developers will be able to take advantage of a number of tools previously out of their reach, including Amazon’s Appstore analytics and reporting, and more importantly its In-App Purchase API. The company built an extension of that API that will work for JavaScript, allowing developers to sell virtual goods, subscriptions, upgrades and more within their web applications, and have consumers pay for them using Amazon one-click, just like the Android native counterparts.

In time, Amazon may choose to bring more of its native offerings to these web apps, like its “login with Amazon” authentication technology, for example, but that’s not a part of today’s focus.

Rubenson says the company is excited for the addition of web apps to its store because it’s another way for developers to monetize their efforts – meaning, of course, Amazon gets a cut via the standard 70/30 revenue share involved. Plus, it serves as a way for developers without the experience needed to build native Android applications can bring their apps and sites to Android users. This targets a large swath of iOS developers, naturally, who today are still bringing their applications to iPhone or iPad first with promises of Android applications yet to come.

This is true not only for smaller startups who don’t have the resources or skill set in-house to build for Android, but also for larger tech companies who just don’t see the benefits in developing for a consumer base that’s still relatively difficult to extract revenue from.

Though the impact of such a change to Amazon’s Appstore may not be immediately obvious upon today’s launch, Amazon notoriously plays the long game. By opening up to web apps, Amazon has taken a step that hints at its longer-term plans on mobile – a comprehensive app store which grows its numbers by betting on the good-enough capabilities of the web, and R&D spent specifically on making “the web” work better and faster on Amazon hardware.

Meanwhile, though rumors of an Amazon smartphone swirl from time to time, what Rubenson would say today is that the company is currently focused on expanding the Appstore’s footprint and distribution through pre-load deals. Three of last several Verizon handsets (Samsung Galaxy S4, LG Lucid 2, Motorola Razr Micro) have shipped with the Appstore pre-installed, he says, and there are around a half-dozen preload deals in total. These are all in the U.S. for now. But, says Rubenson, “we’re viewing this as a global market segment for us.”

Support for web applications follows a series of moves in making the Appstore more robust an offering, including the launch of other developer tools like analytics and reporting, A/B testing, in-app purchases, GameCircle, and more. The Amazon Mobile App Distribution Program is available now at https://developer.amazon.com/appstore in the nearly 200 countries Amazon’s Appstore serves.