When Caterina Fake and Stewart Butterfield founded Flickr in 2004, creating a community around photos was a huge challenge. “There were very few people on internet to begin with, and within that group, there was a small group of people who engaged in social networks,” explains Fake. With Fake’s newest startup, Findery, she has been embarking on the same challenge she faced nearly ten years ago: creating a community around user-generated content. “Growing a bona fide community, even now, from scratch is difficult,” she tells me.

Findery, which launched into public beta last Fall, ha stayed relatively under the radar considering both Fake’s notoriety as an entrepreneur and the high-profile investors like Redpoint, True Ventures, Founder Collective, SV Angel, and Keith Rabois. After last October’s launch, Fake and her team of 12 engineers and designers have been heads down on doing what she does best: fostering organic growth around a community.

In short, Findery’s web and mobile web apps lets you take photos and notes from specific locations and tag them on a map anywhere in the world for other people to see and discover. You can open the site and find all of the notes that have been left in your area, or you can search for an area and find the notes and pictures left in that location. The site uses Google Maps as the foundation for finding the notes.

The startup has done little to no marketing or advertising to date, focusing on organic growth. Findery currently has tens of thousands of users leaving hundreds of notes each. The average user, says Fake, is highly engaged with the site, leaving lengthy notes in their home town or even travel. In this collection on Findery, a woman is taking a cross-country trip to visit her niece and is leaving notes along the way. SF Made is using Findery to mark spots in the city where makers are located. This user, based in Dubai, is creating a personalized guide to the city.

Many who have entered a similar local, content-focused approach have been tempted to take short cuts on adding content and users, Fake explains. Some of those could be importing Yelp reviews, and more. But while there have been temptations, Fake and her team have resisted this in favor of having original content be the foundation for the community. 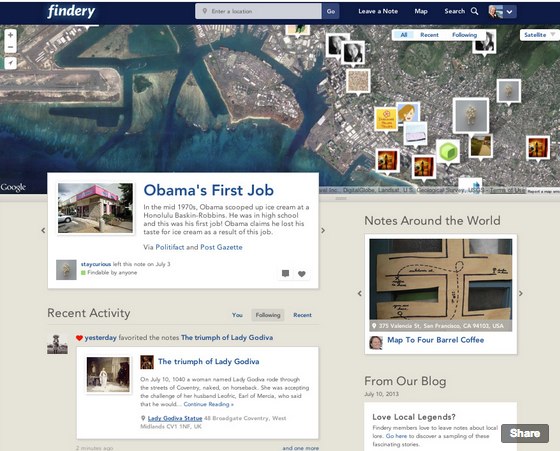 The other area where Fake is definitely not focusing with Findery is around photo-sharing, which was the primary product focus of Flickr back in the day. “This is not about social peacocking,” she says, referring to some apps that offer the ‘look at me’ experience. “It’s not about showing off where you went for dinner, or putting your social life on display, this is more about telling the story of your life and connecting this with places.”

Many startups and companies have solved the problem around where to find the best donut or restaurant but Fake sees the real opportunity in discovery around personal stories and human experiences. Here’s an example of a collection around all the offices of LinkedIn.

Fake credits much of the talent she scooped up from Flickr and Yahoo who have strong backgrounds in community development. The secret sauce to creating an engaged community is to employ people who have experience with humanizing the internet, says Fake.

While Findery has been completely web-based, the startup will be launching an iPhone app in the coming months. For now, all contributions have been made via web and mobile web.

Creating communities from scratch around content and sharing is an ambitious project in a Facebook-dominated world. Monetization isn’t clear cut as well. Having tens of thousands of users is an accomplishment but these days, apps are judged by how many millions of users they collect within a year. And as Fake explained above, she doesn’t want to take any shortcuts. But it’s clear that Fake has a vision for Findery. And a passion for creating communities. And she has some of the best talent helping her along the way. Of course, it wouldn’t be surprising if there was some acquisition interest around Findery, and Fake, who has built and sold two companies previously.

For now, Fake and her team delights in the stories that are shared through Findery. From family reunions to hidden murals in San Francisco, to a diamond mine in Russia, Fake says that Findery brings “endless surprises.”