Edward Snowden: “I, sitting at my desk, [could] wiretap anyone, from you or your accountant, to a federal judge or even the president, if I had a personal email [address].”

Rep. Mike Rogers: “He was lying. […] It’s impossible for him to do what he was saying he could do.”

Who is right, and who is lying? According to new revelations by the Guardian newspaper and Glenn Greenwald, the government was again avoiding the truth and Snowden was, in fact, correct. An NSA program by the name of XKeyscore provides precisely the capability that Snowden detailed and Rep. Rogers denied.

Government denials of NSA capabilities are beginning to come up as false a sufficient number of times that they are losing the stature of an official remark, and are instead slipping increasingly into the realm of rank misdirection.

Here’s how XKeyscore allows the NSA to read your email: an analyst, without needing a warrant, merely has to provide an email address or an IP address, a written “justification,” and a time range. That’s it. If that feels a bit loose, you have the proper internal reaction. (For information about how the NSA collects and stores the data, head here.)

The documents note that the “bodies” of emails are in fact searchable, meaning that the NSA has the ability to go far and beyond the simple tracking of email metadata. That too is searchable, however, but is not the full extent of what the NSA can in fact find and access.

What happens after the analyst requests the emails from XKeyscore? Greenwald: “The analyst then selects which of those returned emails they want to read by opening them in NSA reading software.” According to the documents, the software can be used to read communications that “transit” the U.S., as well as conversations that “terminate” in the U.S. While the communication in question is from a foreign source, and therefore not privy to Constitutional protection, I doubt that the rest of the world finds that defense relaxing.

What is perhaps most chilling in this is the laughable security standards set up to protect privacy and individual rights: the “justification” section of the email request. See if you can spot it: 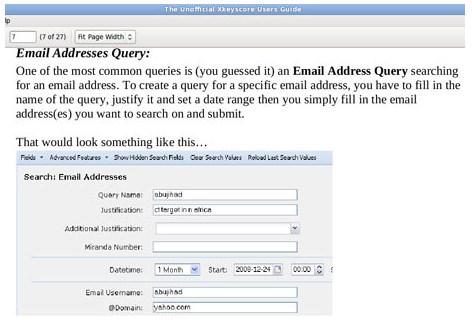 Two small fields and we’re off to the races. And one is a damn drop-down menu. One wonders what options the NSA helpfully provides its analysts.

The above is new, and revelatory, but perhaps not particularly surprising. What it does demonstrate is that our prior idea of digital privacy not existing was correct and that a select cadre in the government is consistently falsely presenting the capabilities of this nation’s digital surveillance.

And that’s not very damn good.